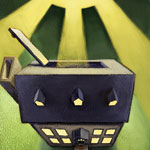 When the word green pops up at cocktail parties in Fairfield County, it’s more likely to be in the context of a lawn or trousers embroidered with blue whales than home design.

“In this part of the county, the homes are so expensive and lavish that a lot of people don’t give a hoot about energy costs,” says Steven Winter of Steven Winter Associates, Inc., an architectural and engineering firm in South Norwalk that consults on green design and construction.

“I think there’s a perception that new materials that haven’t been around for a long time are more expensive and riskier,” says John Rountree, a Westport architect involved in solar home design.

But the situation appears to be changing. This last winter, heating bills for homes and offices nearly doubled — and that was after a mild winter. Even Connecticut Attorney General Richard Blumenthal was moved to lash out at state utilities and call the electricity prices “out of control.” With local concern rising, architects and builders are seeing a newly heightened crop of ecology-conscious homeowners.

Then there are the kids. “What may be driving the change is children coming home from school saying, ‘We’ve got to treat the earth better,’ ” Winter observes. “But there are opportunities to be good to the planet and have good housing. Frankly, a green, energy-efficient house isn’t just environmentally friendly. It’s also healthier and more comfortable.”

Adds Rountree, “Green materials are becoming much more mainstream today, with many more resources available for locating and purchasing them.”

When it comes to building the better “eco” house, however, there seems to be no one school of thought, nor any central office for wise design. Talk to ten architects and you will hear ten different theories.

So where should a person turn if suddenly stricken by a greened conscience? It’s not like the late 1970s, when the whole country, shaken by the Arab oil embargoes, plowed a lot of attention into solving the nation’s energy crisis. With plentiful tax breaks offered, innovation soared and so did interest in actually applying it. When the tax breaks were rolled back in the 1980s, and the oil supply returned to normal, the country stopped paying attention to the need.

“You’ve just got to look around to find the new technology that suits your designs,” says Rowayton architect Robert Everett. He is now employing a variety of measures to boost climate-control efficiency, such as capturing warmth in the upper floors and moving it back to the basement. “No, I didn’t go back to college to learn these things,” he says with a smile. “You just have to investigate to find out what’s out there. We’re all searching.”

For existing homes, green renovation might best begin with an energy performance audit, which is conducted by firms like Steven Winter Associates and ranges in cost from $400 to $800. For new homes, it’s wise to talk to a green architect or builder.

Totaling up the actual dollar savings of any given energy-saving design is often difficult. Most methods require an up-front investment that realizes savings only in the long run. But what about listening to your children and saving the earth? Here is a sample of the latest technologies being adapted by some of the smartest architects in Fairfield County.

Darien. The natural beauty of this stretch of the Gold Coast is now being preserved in part by, of all things, synthetics. On Bluff Island, the South Norwalk firm of Robert Cardello Architects is designing an environmentally friendly, 7,200-square-foot house with radiant heating, argon-filled windows that reflect light off the water and a synthetic slate roof. As stocks of old-growth, large-dimension lumber thin, a broad selection of synthetic and recycled products is coming to market and providing attractive alternatives: engineered lumber using smaller-dimension trees and composite material; products made from salvaged and recycled materials; and synthetic building materials such as polymer slate and shakes from companies like DaVinci, and vinyl polymer exterior trimboards from companies like Azek.

Cardello has also designed an 8,000-square-foot shingle-style house, currently under construction, that uses paperless sheetrock. “Mold is the new asbestos,” he says, “and this is a new product in response to it.” Because mildew and mold can form in traditional drywall, green builders and architects are turning to products like Georgia Pacific’s DensGlass — a paperless, all-gypsum board for use in garages, basements and bathrooms.

“In this market, we can’t convince people not to build big houses,” Rich Granoff says, “so it’s a question of how we can specify products that use less energy or will save energy.”

And, as if to disprove the notion that bigness is antithetical to ecology, Jones Footer Margeotes Partners has designed a geothermal heating system that will go into a 14,000-square-foot house being built for a client on the water in Greenwich, who is involved in energy trading. “These days, geothermal is often mentioned on large houses,” says Randy Henkels, the job’s project manager. “Basically, it’s drawing from a constant heat source — the ground.”

Geothermal systems, also called ground-source heat pumps, tap the earth’s constant, renewable heat energy and transfer it to the home through a network of tubes, or “closed loops,” that are filled with water, refrigerant or antifreeze. In summer, heat is pulled out of the house and returned to the earth.

A geothermal system saves 35 to 45 percent in energy costs over a conventional system, but there’s a big front-end cost: It takes ten to twelve years for the system to pay for itself. “You don’t do it to save money, at least not in the short term,” says Henkels. “You do it if you expect to be in the house a minimum of ten years, or if you expect fuel prices to continue to rise, or if you’re environmentally aware.”
Norwalk. Darien inventor Henry Huse is building a solar home on the South Norwalk shore that will demonstrate his faith in energy-saving systems. The house, designed by the late architect John Franklin Houk, will tackle energy effectiveness on three fronts: photovoltaic cells for generating electricity; solar panels for heating hot water and the house; and passive energy, gained from highly efficient construction techniques.

Two large expanses of roof facing the south and pitched forty-five degrees will maximize solar radiation. The panels will be mounted flat on the roof to give the structure a clean look, not unlike large skylights. A centrally located two-story greenhouse adds to the passive solar design. Huse claims that the 400 square feet of thermal panels, combined with his patented solar heat pump, will provide 80 to 85 percent of the heating and hot water requirements of the house. The photovoltaic panels will provide approximately four kilowatts of electrical energy (a large refrigerator-freezer uses less that one kilowatt). Henry and his wife Jessica are moving in this spring and are looking forward to negligible power bills.

Westport. The sun is smiling on some Westport residents this spring. Rountree Architects has been commissioned to turn an old Vermont barn, reconstructed on a South Turkey Hill Road site, into a solar house, and to design a new one in Easton. In addition, last year John Rountree, with partners Mark Pizzi and Sam Vail, started up Westport Solar Consultants. The firm is working with the town of Westport on solar-panel systems for the Westport Fire Department and for Earthplace, the former Westport Nature Center.

Unlike solar-thermal systems of the 1970s — panels, clunky as disco boots, that heated only water — today’s thin panels sit sleekly on roof surfaces and use photovoltaic (or PV) technology to convert sunlight into pollution-free electricity. Tied to utility grids operated by Connecticut Light & Power and United Illuminating, PV systems can produce some or all of a home’s electricity, and even extra electricity that can be sold to utility companies. As an incentive to homeowners, the Connecticut Clean Energy Fund offers rebates that reduce the cost of installing solar systems.

Solar electric panels are likely to pay back the original investment, including rebates and tax incentives, in twelve to fifteen years, all the while tapping a renewable, nonpolluting source of energy.

Wilton. Abandoning the technology that gave civilization the cinder block, Alina Rodescu-Pitchon, of Ali & Ben Design Studio, has designed a 10,000-square-foot energy-efficient house using insulated concrete forms (known in the green world as ICFs) that consist of thick pieces of foam made from recycled polystyrene. The eleven-inch-thick blocks are stronger and fit tighter than ordinary concrete blocks and double as insulation. While costing about 15 percent more than regular concrete foundation blocks, ICFs can cut heating and air-conditioning costs up to 45 percent.