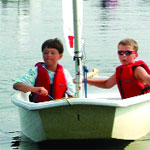 Viewed from the fast lane of I-95, Stamford passes in a blur of blue-gray metal, concrete and glass. The upstart metro-community, which prides itself on being “The City That Works,” has earned a reputation over the past few decades as a corporate, retail and entertainment destination in lower Fairfield County. And for many, that’s enough. But venture off the beaten track, beyond the frenetic façade of the city center, to discover another, more subdued Stamford, where the pace often slows to a crawl. From the recreational waters of Long Island Sound to the wooded sanctuary of North Stamford, the city is truly a treasure trove of “surf and turf” possibilities.

The eighty-three acre Cove Island Park at the lower terminus of Cove Road offers one-stop recreation ranging from a beach with pavilion, concessions and marina to tennis courts and softball fields, fishing and horseshoes, and play and picnic areas. Like all city beaches, Cove Island requires residents and nonresidents to purchase an entrance sticker; details are available at stamfordrecreation.com or by calling 977-5214.

Bird-watchers won’t want to miss the new Wildlife Sanctuary in the park’s southwest corner. Thirteen acres are being planted in consultation with the Audubon Society to attract visitors of the winged variety.

If, on the other hand, you’re looking to beat the heat, amble across the park to the Terry Conners Ice Rink, which boasts year-round skating on “the fastest ice in Fairfield County.” Open sessions and rentals are available.

Steps away, over a cement footbridge, is the SoundWaters Community Center for Environmental Education. Based since 2000 in a historic, nineteenth-century Federalist-style home with expansive views of Long Island Sound, the nonprofit reaches more than 40,000 adults and children annually through a variety of programs promoting protection of the adjacent waters and watershed.

One of its most popular offerings is full-day summer camp for children in grades K through eight; this year’s dates are June 26 through August 25.

An hour-long Eco-Tot program for preschoolers is also offered. Online registration is available, and organizers swear it’s not too late to sign up.

Water fun is a mainstay at Camp SoundWaters, whether it’s exploring hidden habitats by canoe, sailing an Optimist dinghy on Holly Pond or cruising aboard SoundWaters, the center’s eighty-foot, three-masted schooner that’s anchored nearby at the foot of Washington Boulevard.

“Campers are out on the water, digging in the sand or in the tidal pools every day,” explains Charlie Taney, director of development and marketing. “It’s all about discovery, about seeing kids have that ‘aha!’ moment when their eyes light up.”

Public sails, which commenced Memorial Day weekend, will continue through mid-September. A word to the wise: Fourth of July sails (and there are several to make the most of the many community fireworks extravaganzas up and down the Sound) fill up early.

Additionally, the schooner can be chartered for private parties, wedding receptions, meetings, or any gathering of friends and family right through October.

Summer wraps with the annual Conservation Fair/Kayak Race on September 16. The hale and hearty can kick-start their morning with the Ship-to-Shore Regatta, offered in two divisions: a timed, 7.5-mile contest, and the two-mile Family Fun Race. Both are strictly BYOK (Bring Your Own Kayak.) Stay to peruse the exhibits, perfor-mances and activities geared toward natural-resource preservation.

“This is a beloved institution in Stamford,” notes Melissa Mulrooney, the center’s executive director. “It’s a very exotic Central Park for Stamford residents and the entire Fairfield County region.”

While attracting mostly families, the center offers a full day’s worth of educational and recreational activities for all ages: the traditional working Heckscher Farm with its animals and gardens, miles of woodland walking trails, extensive collections of American history and art, the kid-friendly Nature’s Playground, an observatory and planetarium for viewing the heavens, and year-round art and nature classes for toddlers through adults.

Before lacing up your boots and stepping out for an up-close-and-personal rendezvous with Mother Nature, drop by the freshly renovated Overbrook Nature Center for a quick orientation. A wide-format, wheelchair- and stroller-accessible trail is new to the mix this year, and signage along the way has been updated. As an added bonus, trails connect directly with the Bartlett Arboretum on the north end of the museum’s property.

More big news: The otters are back. After a nine-year absence, the Otter Pool (with its new residents, a cuddly pair from New Orleans) was unveiled in early June at the social event of the season called (what else?) the Otter Ball.

A full roster of summer camp options — parent/child, half-day and full-day, accommodating everyone from “Baby Botticellis” to sophomores in high school — runs through mid-August. Check out details online at stamfordmuseum.org or call 322-1646.

Other crowd-pleasers on tap for summer include Built to Scale, a model-making exhibition covering autos, boats, and planes (runs through October); the Sink or Float Boat-a-thon, a chance for young boat designers to construct and race their own watercraft (August 12); Up, Up and Away! model airplane competition (September 16); and the end-of-summer Model Soap Box Derby (September 23).

Members only are invited to pitch a tent, chow down on BBQ and take in a dazzling show at the planetarium during two family campouts scheduled for July 22 and October 7. Just be sure to save some room for a carbo-laden pancake breakfast the following morning!

The fun doesn’t stop with the end of summer. The popular Art-for-All Open Studios resume in the fall with Getting Piggy with It (September 30) and Udderly Artrageous! (October 21), offering porcine and bovine entertainment for ages three and up with adult supervision. The Mini Sailboat Regatta (October 14) begins with easy-to-assemble pinewood sailboat kits and ends with organized races at Bendel Fountain.