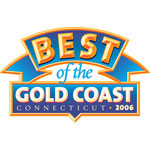 Building on the blockbuster success of last year’s inaugural Best of the Gold Coast, we’re ready to do it again. So far every indication is that this year’s celebration on Wednesday, August 9, at the Greenwich Hyatt will be bigger and better than ever.

Click here for more information about this year’s Best of the Gold Coast Party.

That prediction is based on a lot more than just wishful thinking. In fact, the number of readers who filled out the ballot this past February and March was more than double that of 2005. And we enlarged the survey choices to include more restaurants, additional retail shops and other categories. Some of the winners’ names will be very familiar, but there are a large number of new selections as well.

Then there are the Editors’ Picks. This year our editors and food writers once again scoured the area for selections that may be less obvious but represent the “best” in a particular group. One editor found TuTu Bella, a company that Westporter Anne Spencer runs out of her living room. Anne makes and sells tutus that instantly turn our little princesses into ballerinas. It’s really “Tutu Much.”  We also have the “Best Way to See into the Future” (tarot card reader Jane Stern) and “Most Decadent Desserts” (Chocopologie in South Norwalk). You get the idea. It’s a section that is at times whimsical, but we hope you find it as much fun to read as we did to write.

One of the best developments for us is that this year we didn’t have to do a lot of explaining to convince businesses that they should participate in the “Best of” party. Those who are repeat winners were excited to be invited back to be part of the fun; new first-place finishers seem to have heard about our 2005 event and were thrilled to be included.

As was the case last year, Kids in Crisis has been designated as the recipient of a portion of the proceeds from party ticket sales. This Greenwich-based organization is widely recognized for its innovative programs that help children and families struggling to solve severe problems in their lives. Its clientele come from all the towns served by Moffly Publications’ magazines, making it the ideal choice to be the Best of 2006 beneficiary.

Last year more than 1,500 people attended our “Best of” party and, judging by the feedback, they all had a great time sampling the top food, drinks, entertainment and more that this section of Fairfield County has to offer. This year we’re hoping for an even larger turnout — and we hope you’ll be among them.

Have I convinced you that the party on August 9 is something you won’t want to miss? For information on how to purchase tickets, go to our website: bestofgoldcoastct.com. You’ll also find a list of our sponsors and a gallery of pictures from last year’s gala.

And be sure to tell your friends and neighbors. It will be great fun. See you there!