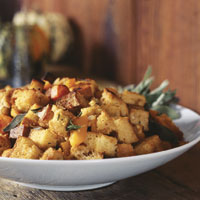 We all know that a regal, plump turkey, with its crisp skin gleaming golden brown, is an essential part of a Thanksgiving feast, but what I find amazing is how many people are content to serve this holiday centerpiece tasteless and dried out year after year. Let’s face it: The beloved roasted bird rarely tastes as good as it looks.

The reason, of course, is that the most traditional and time-honored methods of roasting a turkey are vague and result in white meat that’s very dry (usually because of the need to cook the dark meat to a higher temperature). But there are ways to make a roast turkey that is tender, flavorful and juicy — and it’s easier than you might think.

The Pilgrim’s Pride
First of all, for the best flavor and texture, start with a quality turkey. “I like to
use heritage birds,” says Chef Michel Nischan, owner of The Dressing Room: Newman’s Own, on the grounds of the Westport Country Playhouse, and an avid proponent of sustainable farming. “These historic American turkey breeds are truly the essence of the holiday table and bring you a little closer to what the Pilgrims may have eaten at the first Thanksgiving. “Buying these birds also promotes a viable, sustainable food future and supports rural communities.”

Unlike the mass-produced, large-breasted turkeys, these heritage birds have remarkable flavor and texture. Their white meat would never be mistaken for chicken, and their dark meat is as rich and sensuous as duck. Heritage breeds, such as Narragansett, Bourbon Red and American Bronze, owe their taste to diverse diets and extended life spans. These turkeys are raised outdoors, roam freely on pastures and eat the varied diet nature intended them to eat, and they have been quietly gaining a renewed market and respect because of their flavor and superior biological diversity. Although they cost more, they taste so much better than the white turkeys found in most supermarkets.

Nischan prepares a heritage turkey by stuffing the cavity with fresh herbs and roasted garlic and onions, wrapping it in four layers of paper bag, sealing it airtight in a plastic bag, and then refrigerating it overnight. “The paper layers let the air circulate and the flavors permeate the meat,” he explains, “while the plastic layer locks in freshness and moisture. I then roast the turkey and let it stand at room temperature thirty-five to forty minutes before serving.” Nischan adds that letting the roasted bird rest is an important step that allows the meat to relax and the juices to redistribute. There will also be carryover cooking as the inner temperature continues to rise after the bird is removed from the oven.

The Life of Brine
A tasty option to the heritage turkey is a natural, organic, free-range bird, claims Matt Storch, chef and partner of Match Restaurant in South Norwalk. “I like turkey that is natural and fresh-tasting, raised and grown the way they are supposed to, without additives,” he says.
Storch also prefers to brine his turkey before roasting. Brining, a method where you soak the turkey for several hours in a mixture of salt, sugar, water and flavorings, can transform even the driest meat into a juicy-tasty sensation. Nischan is also a proponent of brining whole turkeys, but he does not brine heritage breeds because they have an inherent flavor that brining would subvert.

Brining enhances juiciness in several ways. Storch explains: “The salt allows the meat to absorb liquid during the brining period. Since the meat is juicier at the start of cooking, it ends up juicier.”

Brines vary considerably from chef to chef, as do recommended brining times. Most chefs bring the brine mixture to a simmer, which dissolves the salt and draws out the flavors of the seasonings. But Nischan cautions that the brine should be completely cold before adding the bird so that it will not absorb too much salt. By playing around with the liquid base and seasonings, chefs give their brines personality. Some chefs, such as Storch, use apple cider or orange juice. And the seasonings can run the gamut from thyme, rosemary, bay leaf and garlic to cinnamon stick, star anise or vanilla. Many cooks put some sugar in their brine to sweeten the meat and make it brown better while roasting, as Nischan does.

How long to brine depends on the size of the turkey, but, generally speaking, the saltier the brine, the shorter the required stay. Storch likes to brine turkey for twenty-four hours, and Nischan says three to four hours is sufficient.

Simplicity Counts
Traditional methods for cooking turkey can work, too, according to Debra Ponzek, chef/owner of Aux Délices, a Greenwich-based prepared food and carryout catering firm. “If you get a great natural, free-range bird, then a simple preparation is all it needs,” says Debra. She has brined turkeys with great results, but feels if the bird is truly fresh and organic, then it probably doesn’t need the extra step. Every year Debra supplies her many customers with fresh turkeys (from an upstate New York farm) ready to cook in a roasting pan complete with cooking instructions and an herb basting butter. Her method is to simply roast the turkey in a preheated 325 degree oven for fourteen minutes per pound, basting the bird two or three times with the herb butter.

Some advice on stuffing it: Debra says to be sure and fill the cavity with hot stuffing to reduce the chance of bacteria forming, which might happen if you just stuff it with cold stuffing and let it sit for hours. Having hot stuffing, Nischan adds, promotes more even cooking.

What about the deep-fried turkey craze? Storch and Ponzek haven’t had a lot of experience frying turkeys, but Nischan, who has Southern roots, considers it a great cooking technique. “This Cajun tradition of frying a whole turkey produces sensationally juicy meat and delightfully crispy skin,” he says. An added advantage of cooking a turkey this way is that it takes less than an hour to cook the whole bird.

But it’s messy and presents some hazards, especially when doing it in an enclosed space. For these reasons, the whole operation should be moved outdoors. There is some special equipment you need in order to take on this project, and Nischan advises that you don’t attempt this without the right tools. He recommends using grapeseed, canola or peanut oil because of their high smoke point, meaning they can be heated to high temperature without smoking or flaming. He also says the oil must be heated to 350 degrees before you begin. When the oil is the correct temperature, it will sear and crisp the outside of the turkey, allowing the inside to cook without losing moisture and without absorbing oil.

Whether you are using one that is fresh or frozen, brined or unbrined, fried or roasted, there is one important step: Allow the bird to sit for one to two hours to bring the bird to room temperature before cooking it. “It’s a step many cooks ignore, but one that is critical to the end result. It allows the bird to cook evenly and will also reduce the overall cooking time,” says Nischan.

If you follow the advice from these chefs, the majestic, golden brown turkey sitting center stage on your table this Thanksgiving will not just look succulent, but will taste that way, too. It will be so good, you’ll look to serving it all through the year.