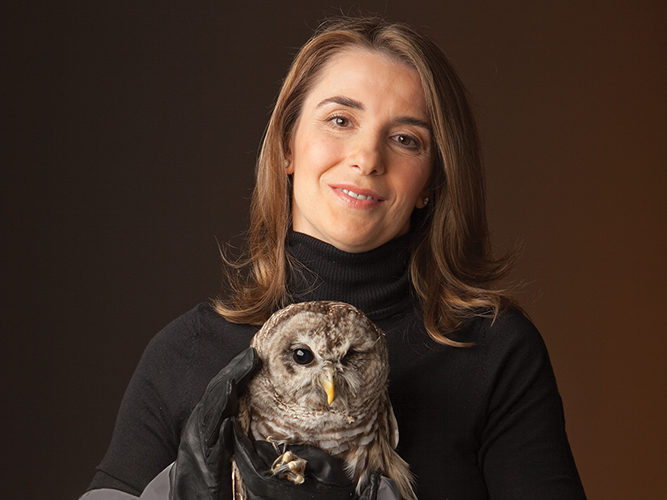 In a secluded place in Weston surrounded by a quiet forest, a gentle woman, Dara Reid, welcomes wounded, ill and orphaned wild animals. Pretty songbirds make music and coyotes howl at night. They feed nectar from a syringe to a hummingbird they named Bonnie—every twenty minutes for fourteen hours a day. They coax a shaken fawn back to health after her mother was hit by a train in Darien (the baby was rescued by the conductor).

This may seem like a storybook dream in today’s fast-paced world, where kids play Wii “World of Zoo” rather than visit the real thing, but it’s not. Dara founded the nonprofit Wildlife in Crisis (WIC) in 1988 and has been quietly running it ever since. Each year, she and a team of volunteers and interns field over 15,000 phone calls and care for more than 5,000 animals.

“I was always drawn to strays, farm animals or wild animals along the roadside,” she says. “I realized at a very young age that they were without a voice, without significant protection and without rights.”

Dara, a Connecticut native, lives with her family right on-site—her husband, Peter, works in publishing by day and tirelessly helps care for the animals after hours. Daughter Willow Rain, nine, is growing up with a menagerie around her. But the facility is stretched thin. It’s entirely volunteer-run, relying on donations to nurse a barred owl like Eleanor (pictured here), or save a baby bald eagle tangled in a fishing line.

She is all about saving wildlife every way she can. One day a young boy came in with a little downy woodpecker he had shot with his pellet gun when aiming for a squirrel. “This was an opportunity to educate him one-on-one and show him the birds in our care and the orphaned baby squirrels brought to us after their mothers were shot,” says Dara. “He made a donation toward the bird’s care with his personal savings and promised to never shoot another living being. I believe him.”

Fans flock to the place. “We’re amazingly lucky to have Dara and WIC in our community,” says actor James Naughton, a longtime resident of Fairfield County. When his two dogs found a fawn with a broken leg, he called Dara. “She said ‘Bring him up.’ I was overwhelmed by the number of animals, raptors and babies of every size and shape being fed all day and night by a few volunteer interns.”

“If you ask Dara about the work, she’ll make it all about the animals. About the barred owl whose nest fell to the ground or the orphaned baby bunnies,” says Amy Jenner, a busy Pfizer sales professional and WIC volunteer. “Dara Reid never says no, but WIC subsists entirely on donations. Every penny goes directly to care of the animals. Without it, thousands would die every year.”

As for Bonnie, the featherlight hummingbird, it took her a year to molt and grow in new flight feathers—and Dara plans to release her this spring.