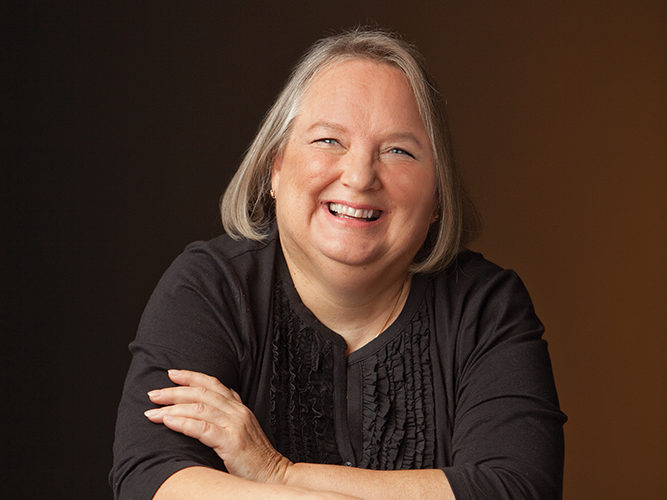 “I had a mom who read to me all the time. She loved words,” says Edie. So much so that Edie and her brothers grew up without a TV. “There’s a great poem, ‘The Reading Mother,’ by Strickland Gillilan,” she says. “The lines say ‘Richer than I you never can be—I had a Mother who read to me.’”

She also had a grandmother who gave her a Singer sewing machine one Christmas, which Edie used to make a long white high school graduation dress and later, hippie skirts in college and then American Girl clothes for her daughter’s dolls.

Once her daughter graduated from high school, Edie began volunteering part-time at the Mercy Learning Center in Bridgeport—she was a kind of modern-day Mary Poppins, with an ever-expanding carpet bag of skills to teach the women enrolled there. She started with English and then added basic sewing. Soon, she was on the board of directors.

“Bridgeport is the poorest zip code in the state,” she notes. “We get a lot of women in their late teens, a lot of young moms. We teach them how to read and write, so they can keep ahead of their kids and their homework. We tell them about bringing cupcakes into school for their child’s birthday, or going to the movies, or how to read recipes. We’re trying to make their lives easier, help them fit in.” The sewing classes also provide a valuable—and marketable—skill set that help the women gain economic independence. They can work in dry cleaning shops as tailors or barter their services, sewing for neighbors in exchange for meals or childcare, explains Edie.

The rewards are rich. “I hope I’ve given out as much as I’ve gotten, because I’ve gotten a lot,” she says. “One of my favorite ladies was a sharecropper’s daughter from the South. She had been married to the same man for maybe fifty years. And now she could finally write him a love letter. We were all in tears.”

“Thousands of women who were enrolled at Mercy Learning Center over the past eight years have benefited from the time, energy and gifts that Edie has graciously shared,” says MLC’s development director, Kathy Parisi. “She helps them build their dreams.”