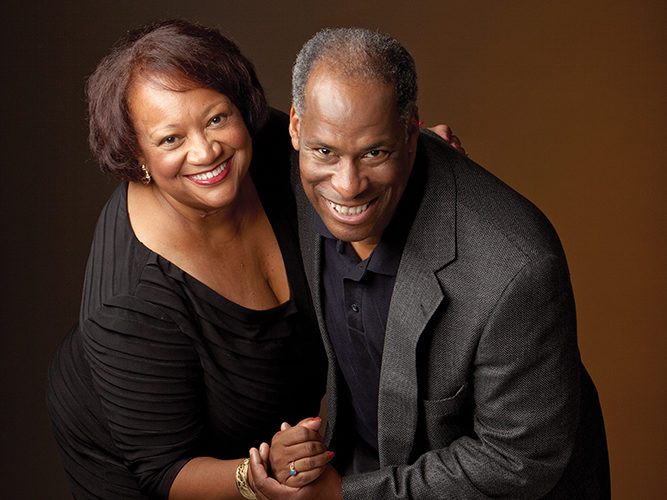 Juanita James and Dudley Williams of Stamford don’t just work together well as spouses and proud parents to their son Dudley N. Williams III, who is twenty. They also complement each other as advocates for change.

Even their high-profile careers are focused on giving back—Juanita as chief marketing & communications officer for Pitney Bowes, a role that involves overseeing corporate citizenship and philanthropy, and Dudley as director of district education strategy at GE Asset Management Group, working with a landmark grant to help improve Stamford Public Schools.

They both tutored during college (Juanita at Princeton, where she graduated in the second class of women admitted to the University and Dudley at Columbia), and by the time they moved to Stamford, they were really ready to dig in.

Once their son was in the school system, they got a closer look at the causes they wanted to target for the greater good. After Dudley III attended a half-day preschool program run by the Board of Education, word was it was going to be cut—so his dad started going to Board of Ed meetings to help save it. “It was quite a battle,” says Dudley. But the program survives, now replaced by the full-day School Readiness Program at Childcare Learning Centers of Stamford (CLC), helping hundreds of three- and four-year-olds start kindergarten with every advantage.

“I grew up in New York City, where everything is so massive,” says Dudley. “It was nice to be able to go to a Board of Ed meeting and actually have your voice heard.” He would serve nine years on the board, including two terms as president. Juanita was putting her time into civic and community efforts, too. Both have held pivotal roles on the board of the CLC, and Juanita serves on the board of Reading is Fundamental, a literacy nonprofit with a goal of getting all children reading, especially underserved kids from birth to age eight.

“We can’t expect our schools to do everything and fix every problem,” Juanita says. That’s why she stands behind RIF and other agencies that help complete the big picture of what kids need, from dental care to healthful eating. “When you’re educating a child, that means partnering with other agencies.”

“We’ve got a situation here in our state where almost forty percent of our low-income high school students don’t graduate. It’s everyone’s responsibility to makes sure that public education is doing the job it needs to do,” says Dudley.

Schools superintendent Joshua Starr is quick to praise the power pair. “Dudley and Juanita are great citizens of Stamford and true champions of public education,” he says. “Juanita’s involvement throughout the system has been invaluable and Dudley has brought much needed attention to achievement gap issues. His advice has been instrumental to our success.”