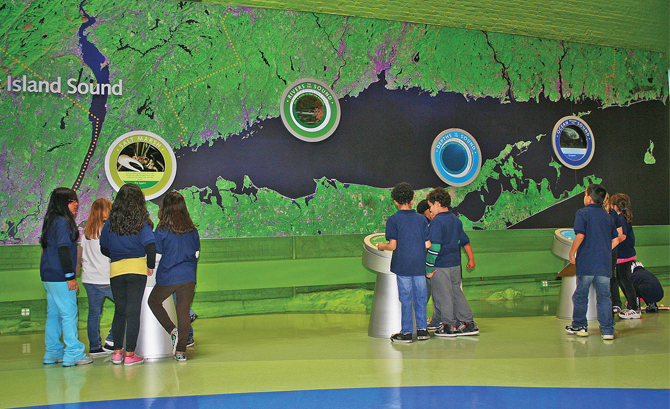 So you think you know the Maritime Aquarium? Having recently undergone a major renovation, this Norwalk institution is worth getting reacquainted with. The refurbishment is the biggest change made to the Aquarium since the 2001 addition of the William Ziegler Education Center. Many spaces look completely different, including the main lobby, which has been rechristened Newman’s Own Hall after a $1.25 million grant from the Newman’s Own Foundation— a philanthropic venture by the late actor, and longtime Aquarium supporter, Paul Newman. Here, you can still catch the popular seal- feeding show  (also revamped into more Sea-World-like entertainment), but the space is now totally open and features a bank of touch screens to help orient visitors to the building and the Long Island Sound. There’s also a new interactive game.

“This renovation is the culmination of my vision for the space,” says Jennifer Herring, president of the Aquarium. “I’d like it to be a megaphone for Long Island Sound, a place to learn and fall in love with these waters.” Other changes include improvements to crowd-pleasing exhibits such as the touch pool, which now counts both sharks and rays as residents and is much bigger and easier for small children to get their hands into. The pool also has a separate area for the fish to relax in so they don’t get worn out with all the attention.

A generous donation from Darien’s Richard and Wendy Hokin—who donated about one quarter of the $4.5 million total that was raised for the renovation—resulted in a complete upgrade of the Aquarium’s main galleries, now called the Hokin Family Sound Voyage. The galleries take visitors on a journey along the Sound and introduce them to the creatures that live there, from sea turtles to sharks. Video screens identify the creatures in each tank, and a series of “Sound Choices” introduces ideas we can all use to become better stewards of the local waters. Lighting has also been upgraded to showcase twenty-seven new species and 300 new animals. In addition, the shark tank is now host to local divers who are miked and can answer children’s questions during scheduled appearances.

“I think the renovation has engaged visitors even more in the story of Long Island Sound,” says Richard Hokin, a longtime member of the Aquarium’s board of trustees.  “And it’s inspired a greater awareness and knowledge of the environment where we live.” The Aquarium continues to support environmental education for students in the tristate area through its Red Apple Fund for Student Enrichment. The fund helps to cover field trip costs for schools that might not otherwise be able to bring students here. The Aquarium also is committed to a number of local schools with its Whole Schools Partnership, in which the nonprofit works to integrate marine science into the schools’ curricula. Currently, the Aquarium is  involved with Jefferson Science Magnet School and All Saints School in Norwalk. For more information, go to www.maritimeaquarium.org