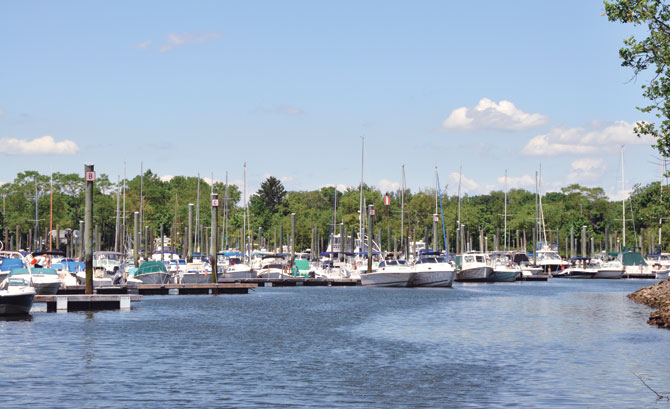 As I walk down the dock at Fairfield Harbor, I see the fishing boat. It’s smaller than I expected it would be. Maybe it’s all the images from movies or fisherman hunting sharks but I thought we might need more than a twenty-three-foot Regulator. Still, the name’s got verve: “Devilman.” Rebellious. Intimidating. The fish should quake. Then I smile because I see it’s immaculate. You could perform surgery on it. And like any good operating room, the crew has already prepped, packed, and triple-checked everything we’ll need for a day out on my first fishing trip.

“Devilman” belongs to Dean Kardamis, a Fairfield resident and builder. He’s been boating and fishing since he was only seven years old. He got his boating license at age twelve and for fifteen years has been hosting charter trips in Long Island Sound and Montauk. The fish are up against a real pro.

We cruise out into Long Island Sound and head toward the Bridgeport Harbor, where we’ll catch our bait. In between the two destinations are schools of bunker (or, more accurately, Atlantic menhaden). They make great bait. First, they have no teeth to worry about because they’re filter feeders (they live on plankton). Second, they’re abundant. Virginia and New Jersey commercial boats used to harbor them to their advantage, but now fishing laws have banned that practice and bunker are traveling our way again.

The tricky part is catching them. We cast lines using a bunker snagger. Dean instructs me to pull the line and reel, pull and reel, until I feel a snag. That means the hook is catching the scales of the fish. It’s best to find a school of bunker before dropping your line, he adds. How do you do that? Look for birds diving in the water (it’s a feeding frenzy). You might also see bunker swimming and jumping out of the water or at least changes in the surface of the water—it will be ripply—but that takes an experienced eye.

I’m starting to feel a little empathy for these harmless fish at the bottom of the food chain. Dean tells me there’s more. In the fall, after the bunker have been here all season, the water is so clean you can actually see the bluefish chasing and eating the bunker beneath the surface. Nice way to treat the fish cleaning up the water. I start to hope that I’ll catch a bluefish.

GETTING SNAGGED
Today is windy, so the water is choppy. Dean begins to temper my expectations by saying that it’s a challenging day to catch anything. On a good day, I’d catch one with each cast.

We end up catching two, about eight to ten inches each, and toss them into the live well. It’s their final moments before becoming bait, but I ignore this. We’re already attempting to catch a third when the U.S. Coast Guard, complete with their mounted 240, approaches us and decides it’s time to do a random safety and equipment check of our boat. This sets us back about twenty minutes, but with our A+ pass, we are soon on our way out of the harbor and ready to catch bigger, badder fish.

“I love the uncertainty,” Dean says about his lifelong passion for the sport. “The conditions are never the same. You’re constantly adapting to nature.” Dean loves seeing the fish go into a frenzy and jump out of the water, because it tells him the hunt is going on down there. It’s the thrill of seeing the food chain in action. Once an owner of a bike shop, he also gets into the mechanics of the boat and the equipment. It takes a half an hour to get everything geared up and ready to go out and at the end of a trip all the reels need to be cleaned and adjusted. All this tinkering with gadgets is fun, too.

STEADY ON
Cruising up the coastline, I sit in front of the helm listening to the waves splashing on either side of the boat and the dull hum of the motor within it. I feel the breeze across my face, the warmth of the sun on my face and taste the salt on my lips. I could get used to this.

I look at the Fairfield shoreline in the distance, we are about two miles out near the BH buoy, a known fishing spot, but I don’t see any other other boats around.

Dean explains that because it’s windy and low tide, the water is choppy—and that means a beautiful day for sun, salt, and cruising, but not for fishing. Stubborn, nonetheless, we drop anchor to try our luck with some chunk fishing.

I’m glad I enjoyed the smooth ride to our spot because now that the anchor is down, the boat is being tossed around like a toy. The dipping and swaying make it hard to stand (now I understand “sea legs” is not just a figure of speech). I am constantly being tossed side to side—and it’s unnerving. Dean assures me it’s just the wind and it will subside. I move to the back of the boat where it is less noticeable but I still have to hold on at all times to keep a steady footing. The guys, on the other hand, are busy readying the poles and prepping the bait.

One of our bunker is cut up into bait and  attached to the line with a circle hook, which is easiest for releasing fish unharmed. We cast the lines and wait. The boat seems to be more still now and while we wait for a bite, the crew begins washing the interior of the boat. No wonder it’s so clean. If they don’t wash the blood from the fish when it’s wet, the sun will bake in a stain.

Dean talks about how this type of fishing is not what he typically does on a trip. He prefers to do light tackle sight fishing, which involves going out early, looking for fish and casting to them. This requires a lot of boat activity—chasing the schools of fish. It’s definitely not a sit-and-wait cast. In addition to fishing here in Fairfield, Dean is an avid fisherman in Montauk. He owns a thirty-two-foot Blackfin named “Teaser” and handles charters for up to six people. He has lots of stories to share.

We sit in the sun and chat about boating and fishing in Long Island Sound and clamming at Cockenoe Island. “I grew up with this,” he says. “People don’t realize all there is to do around here. They leave the area looking for stuff like this, and it’s right in our backyard.” On a Saturday with the right conditions, we would easily be surrounded by twenty boats in this spot.

SIGHT-SEEING
We end our pursuit and circle by the Penfield Lighthouse. We pass a boat dredging for oysters and clams. Dean tells me that the green flags mark where the oysters are being cleaned before being brought into shore and that the red and green buoys mark the channel. As we approach the Fairfield Harbor, we see a group of boys fishing off the dock. I imagine Dean was one of these young fishermen before turning pro. His years of experience is evident as he breezily talks about the Sound. He’s taught me a lot in one day; I’m definitely heading back out another day.

As for not catching a huge fish today, so what? I’m not as obsessed as Captain Ahab. Rather, I’ve enjoyed the day and know I can try another time.

If you’re ready, you can schedule a charter by heading to teaserfishing.com.