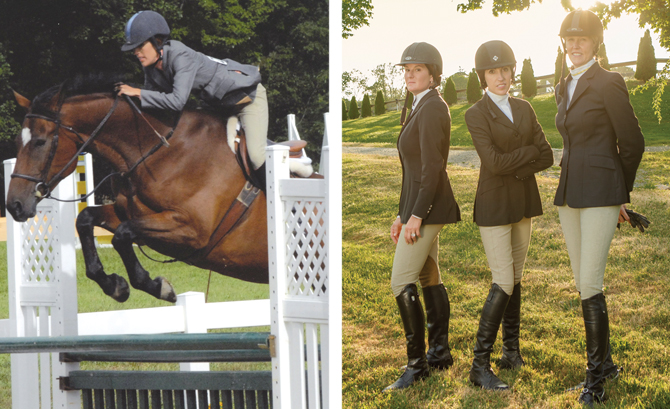 Jenny Iverson Schwartz knows the equestrian world inside and out. As a teenager, the now forty-six-year-old Darien resident achieved a level of success most people only dream about: She was fifteen when she competed in the National Horse Show at Madison Square Garden in New York City and nineteen when she won her first grand prix at The Oaks in San Juan Capistrano. But even she was shocked two years ago when she arrived in Springfield, Massachusetts, for the forty-and-over finals of the New England Equitation Championships and learned she was one of sixty-seven women riding in her division that day. Says Schwartz, “I didn’t know there were that many women my age riding, much less competing.”

The horse show scene has undergone a seismic shift in recent years. Where once the options for older riders were limited—in general, those who wanted to compete had to be amateur owners with a sizable bank account, or turn pro—the adult divisions are now geared toward those riders who still enjoy the thrill of showing, but at less rigorous levels. Nowhere is the phenomenon more evident than in Fairfield County, where women are riding and competing year-round. For many of them, riding is an escape from their busy lives. Others love being part of a like-minded community of seasoned equestrians. All of them, including the three local ladies profiled here, belong to an elite group of enthusiasts, a stable of women with the guts, grits and drive to get a 1,500-pound animal with four strong legs to test the limits of gravity.

When it came time to find her dream horse ten years ago, Liz Phillips had a list of requirements. She wanted a bay horse with a white star that was young so she could train it. She wanted a mare that was a talented jumper and a good mover on the flat. Most important, she wanted a sweet personality. “The truth is, I really wasn’t planning to buy a horse,” says Phillips. “I told my trainer there was no way he could find a horse to fit that description.”

Six months later, Phillips walked into the barn at Silvermine Stables, where she and her daughter Allie had been riding, and owner Ken Markosky greeted her with a grin. “Did you see your horse?” he asked. It was love at first sight for the New Canaan resident and mother, who spent her childhood riding and competing at A-rated shows outside Washington, D.C., where she grew up. “She still had her baby teeth,” Phillips says about Contessa, or Tess for short. “I tacked her up, trotted her around, and then pointed her at a crossrail. She jumped four feet over it.”

In 2004, during the pair’s first outing at the Rosemount Horse Show in Virginia, Tess won the championship in the Baby Green Hunter Division. Ironically, Rosemount was the place Phillips, who is now forty-three, had won the Junior Hunter Championship on her small bay Warhol nearly twenty years earlier, not long before she had to sell her two horses and head off to college. The show’s photographer told Phillips a friend who lived nearby now owned Warhol. They drove to the farm where Phillips’ old horse (now retired) lived, and the experience was emotional. “To see Warhol again after all those years was something I never imagined. I thought I would ride while at school, but I hurt my knee and didn’t ride again for fifteen years. I missed it every day.”

In the years she spent out of the ring, Phillips earned two masters degrees along with a postgraduate license in family therapy, got married, had two children and worked part-time. After her marriage fell apart, Phillips remained in Stamford, where she was the director of the Outreach Enrichment Program for Horizons. When Allie asked for pony lessons, Phillips started looking around for a suitable barn. She was attracted to Silvermine because of its low-key, family-friendly approach. It wasn’t long before mother and daughter were riding together.

“I had no plans to show again,” she says. That is, until Tess.- Liz Phillips

Since that first outing at Rosemount, the pair have competed successfully in the adult hunter classes at A-rated horse shows throughout the East. They kicked off this summer season at Saratoga in May, where they won their first class. The win was especially meaningful to Phillips who hadn’t ridden in a horse show since 2010, when she fell off Tess in the schooling ring at Saratoga and shattered her tibia. The injury required two surgeries and months of rehab. “It was a lot of work to come back,” she says. Fieldstone horse show in Massachusetts followed, and she and Tess were champions in the Adult Hunter Division. Even with those setbacks, Phillips says riding as an adult has been a blessing in many ways. She remarried in 2004 and the sport has been a way to bring her blended clan (her husband and his three children) together. “Riding is a nice experience for our family,” she says.

On a brisk spring day at Ox Ridge Hunt Club, Theresa Bowling is riding her fourteen-year-old jumper, Mike. Nearby, her nine-year-old daughter Avery pilots a strawberry roan pony. Bowling watches approvingly. “He’s going to be a good teacher for her,” she says. The forty-seven-year-old doctor knows how important a good teacher is for a young equestrian. She too started riding as a girl. Her father, a successful lawyer, bred and raced thoroughbreds and would give his daughter hand-me-downs from the track. Bowling converted the former racehorses into hunters that were suitable for the show ring. “Those green horses really taught me how to ride,” she says.

In 1983, when she was seventeen, Bowling qualified for three of the country’s most prestigious indoor shows, including the National at Madison Square Garden. That was the year the American Horse Show Association (now the USEF) decided it would require an additional elimination round before the Maclay at Old Salem Farm. “I chipped in at the second fence,” she says. It was a heartbreaking moment for the teen, who watched her dreams of showing at the Garden disappear. Though she finished out the season, the years of riding had taken their toll. “I was ready to start the next phase of my life,” she says. For Bowling, that meant college and medical school. After a residency in anesthesiology at Yale, she was offered a position at Stamford Hospital in 1995. Even if she’d wanted to ride again, she didn’t have time.

In 1999, she moved from Greenwich to Darien. Every morning on the way to work she drove by the grounds of Ox Ridge, where she had often shown as a teenager. One day, on a whim, she pulled into the driveway and booked a lesson. “I told my father I was thinking about riding. He laughed and said, ‘I’m not paying this time.’”

Within six months, Bowling had found her riding legs. She bought a horse, joined the club and was back in the ring. And then the most bizarre thing happened: She showed up at the barn one August day and her trainer asked her if she’d like to ride a horse for one of his customers in a show that weekend. She won the reserve championship, qualifying for Madison Square Garden in the process; that fall her teenage dream came true. “I didn’t win, but it was an amazing experience,” she says. Bowling found her “once-in-a-lifetime horse,” Tango, in 2000, the same year she got married. Together, Bowling and Tango went on to have a spectacular career in the adult amateur owner jumper divisions, which included winning the Vermont Amateur Owner Jumper Classic in 2004. She retired Tango in 2011 and soon after found Mike, her current horse. In recent years Bowling has been a top ribbon earner in every show she attended and consistently qualified for adult equitation finals.

Life hasn’t gotten simpler for Bowling, who is vice chairman of the department of anesthesiology at Stamford Hospital, the medical director of the Tully Health Center and owner of an anesthesia education business. Still, she tries to get to the barn five days a week. “It’s really important for me to have that break between my work life and my home life. I get on Mike and just walk around the property. It’s a lifesaver for me.”

As a teenager in Rancho Santa Fe, California, Schwartz and her friends referred to adult amateurs at horse shows as The Gong Show. “They seemed old to us,” she says. “Now, I’m one of them.” Since returning to riding in 1999, the mother of two has racked up impressive wins at adult equitation finals, including the New England Horsemen’s Council NEHC championship in 2010. Schwartz’s love affair with horses began when she was a child, and throughout her career, she had the chance to train with some of the sport’s leading professionals, including Hap Hansen, Sandy Aston and Tim Kees. “I had a lot of good horses and I rode a lot. If you’re riding that much, you’re just bound to get good.”

In 1985 she placed second in the ASPCA Maclay finals at Madison Square Garden and rode her quarter horse, Steer Clear, to record-setting titles at marquee events in Tampa, Devon, Washington and Harrisburg. She continued to compete at the highest levels as a college student at the University of Southern California. During that time she juggled schoolwork and riding, but in the fall of 1988, she learned a tough life lesson. “I had qualified for all the indoor shows, yet a week before my horse was supposed to get on the truck to ship east, my father said, ‘I have to sell him.’ It taught me to be very philosophical,” she says. “Count your blessings while you have them.”

After a year of business school, Schwartz headed to New York and a career as an investment banker on Wall Street. She married in 1992, and after several years back in California, Schwartz and her family moved to Darien in 1997. She had no plans to start riding again until her parents sent her a horse in 1999. “They took pity on me,” she says with a laugh. Soon she was competing at A-rated shows. In 2002, when her eldest daughter got the horse bug, she discovered the riding program at New Canaan Mounted Troop. “I was drawn to the grassroots program that Troop offers, because I had never seen a show barn emphasize horsemanship and team work as much as Troop did,” she says.

The not-for-profit riding school was founded with precisely that mission. Each year, more than 100 kids participate in Troop’s cadet program. Schwartz joined the board of directors in 2009 and a year later she was elected president. This past summer, she took over as the group’s development director. “I’m at a point now where my focus is on Troop,” she says. In fact, Schwartz donated her horse, Dark Knight, to the school when it became obvious his serious show days were behind him. “He was so strong he used to blister my left hand going around a course,” she says. “Now he’s king of the crossrails.”