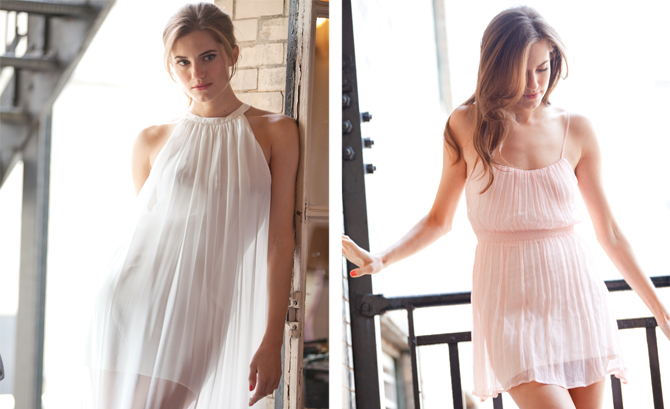 It’s amazing what you can find on YouTube these days, including the perfect girl to cast in your hit television series. The video-sharing site is where Hollywood producer Judd Apatow first spied New Canaan native Allison Williams flirtatiously crooning the lyrics to Nat King Cole’s “Nature Boy.” Two years ago, Williams set Cole’s jazz standard to the tune of the Mad Men theme song and performed it while pretending she was making eyes at Don Draper. Apatow immediately dialed up the aspiring actress’s agent and said, “Make sure she auditions.” And that’s how this beguiling twenty-four-year-old, who got her showbiz start playing character roles at New Canaan Country School, became Hollywood’s new It girl. For Allison is now part of the talented quartet of actresses starring in HBO’s Girls. One of the years’s most discussed new shows, it’s a hilarious, smart and sexually provocative look at the lives of four semi-unhinged twenty-something Brooklyn girls. It also received an Emmy nomination for best comedy series.

The series recently began filming its second season in New York City, where I rendezvous with Williams for some dedicated Girls talk. She waves me over from the entrance of a chic hotel library with a mega-watt smile, introducing herself with an easy familiarity that suggests she’s not affected by her new role as rising star. Here, where people are obliviously tapping away at their laptops, Williams is just a clean-scrubbed, anonymously pretty girl in Bermuda shorts, a slouchy white T-shirt and canvas espadrilles, a girl who can still slip on her Chapstick under the celebrity radar. For now…

Despite her intriguing pedigree—she’s the oldest child of Brian Williams, the anchor and managing editor of NBC Nightly News, and his wife, Jane Stoddard Williams—this actress has lived a remarkably private life. But now she’s eager to talk about her beloved hometown and how she became that girl.

After Apatow—who produced box-office hits like Bridesmaids and The 40-Year-Old Virgin—happened upon Williams’ mesmerizing YouTube performance, her Girls audition invite arrived, and at exactly the right time. She had just satisfied her part of a smart bargain with her parents: Get an education and then try acting. After graduating from Greenwich Academy, Williams hit the books at Yale rather than study scripts in Hollywood. “School wasn’t something I could opt out of and even though I wanted to do exactly the opposite, now I’m grateful that my parents insisted,” she says. While studying English, Williams performed in Yale’s improv comedy troupe and developed her ambitious habit of posting experimental performance videos—including one in which she plays a potty-mouthed premarital Kate Middleton—just to “try things like comedy out.”

After Yale, Williams moved to Santa Monica and tutored disadvantaged high school students (a job she loved) while bracing herself for Hollywood’s rejection. “I was ready to do anything; the tiniest part I could get,” she says. “But I didn’t feel like it was going to be easy.” Soon, Williams’ clean and polished coyness, which Apatow described as the right “vibe,” landed her improvisational audition scenes opposite Lena Dunham, the wunderkind creator, producer and star of Girls. Dunham immediately had Williams in mind for the part of uptight Marnie Michaels from Montclair, New Jersey. “It was a challenging role to cast and the moment Allison appeared, it made sense,” says Dunham. “Her mix of glamour and humor, kindness and type-A toughness was unparalled. I was impressed by her wit and her ability to just roll with it. And her vocabulary!”

Williams has garnered critical praise and considerable attention for her wry and riveting take on Marnie, the tightly wound but charmed girl who seemingly has it all, from the cute (ex) boyfriend and hip art gallery job to parents who still pay half her Blackberry bill. “It’s like everything in her life has been checked off in neat little boxes,” says Williams. “She’s someone who’s very good at giving her friends advice about how to do the right thing, but too insecure to live her own life that way.”

Williams can relate to the characters on Girls. “Some of them represent parts of my friends. Or they are the girls who live in the apartment upstairs. You see them on the subway platform. They seem approachable, interesting and smart, but they don’t know who they are yet.”

And here’s where Williams’ life dramatically diverges from that of the girl she plays on TV. She may be disarmingly approachable and intelligent, but she’s also singularly focused. “I’ve been thinking about and planning for this [career] for as long as I can remember. It’s the only thing I’ve ever wanted to do.”

It may come as a surprise to anyone who looks at Williams solely as the daughter of an iconic news anchorman to learn she grew up in a home where the TV was often dark. When I interviewed Brian Williams years ago, he told me he “zealously guarded” what his then young children watched. For Williams and her younger brother, Doug, that meant lots of books and an occasional hour of carefully screened tube time. “I’m talking PBS and CPTV,” she says. “We didn’t even get to watch Nickelodeon. I used to think I was the only kid in New Canaan who had never seen The Fresh Prince of Bel-Air.”

Her parents’ plan was an antidote to the challenge of raising grounded children in an ultra-affluent suburb. “They were very aware that raising us in New Canaan afforded us a safe and special place to grow up, but they also wanted to keep us from expecting every new thing we saw on TV,” she says. And while Williams sometimes laments her “weird pop culture gap,” she now sees her parents’ child-rearing strategy as a formative gift: It allowed her to indulge a vast imaginary world. “Emotionally, I lived elsewhere,” says Williams. “I was the girl who wore my Belle costume to the supermarket.” Her childhood was filled with drama camps, voice and dance lessons and happy days sloshing in her duck boots at the New Canaan Nature Center. “I was always outside, doing my own little performances with my brother. We made up our own fun.”

Many who knew Williams from her New Canaan days attest to her talent, grounded personality and tenacious work ethic. At New Canaan Country School (where her grandmother taught and her mother also studied) Williams impressed the faculty with an unyielding intellectual curiosity, contagious laugh and undeniable stage presence. “That she should be an actress was something that was abundantly clear, even then,” recalls Topsy Post, one of her teachers. Take the year she tried out for the lead in Annie and was crushed when she didn’t get the title part. Williams was relegated to playing Lily St. Regis, the gangster’s girlfriend. “She walked out on the stage with this distinctive gait and did something provocative with her leg, and I’m thinking, ‘Look at her, she stole the show,’” recalls Post.

At Greenwich Academy, she ascended from character parts (in Grease) to substantial roles—the lead in Guys & Dolls and Pippin. Although Williams claims she was an “awkward and self-conscious” musical theater geek in high school, Head of School Molly King remembers her differently. “She was the girl your eye was drawn to no matter where she was on that stage. There’s a compelling and charismatic presence about her that’s rare.”

It’s hard to look away when Williams, playing Marnie, shuts herself in a public restroom and masturbates against a door, as she did in one memorable Girls episode. The actress seems downright amused when I broach that scene and find myself stammering because, well, it’s just so awkward. “It’s OK,” she says, leaning in to signal permission to continue. ”It’s my character. That wasn’t me.”

If there’s anything that Allison wants to stress, it’s this point: “My goal as an actress is to be a chameleon, to play characters that are 100 percent different from me, but that I’m able to commit to in such a complete way that it’s transformative.” Her idols include actors such as Meryl Streep, Daniel Day Lewis and Philip Seymour Hoffman, mega-talents who possess the transcendent quality she aspires to and who “have managed to keep the focus on their work—not their personal lives.”

That type-A toughness that Dunham described may be the thing that’s steadied Williams for fame. Shrewdly, she never reads her reviews. “I don’t want to see any of it, good or bad. When this whole thing started I was bracing for everyone to hate on me and then I realized if I don’t read it—as tempting as it is—it keeps me stronger.”

On the day we meet, Williams has turned up on the virtual pages of Tom and Lorenzo, two web pundits who post red carpet celebrity photos and make snarky comments. Williams passed their cut, save for her shoes. “Well, I’m glad they mostly approved,” she says, delivering the full throttle laugh that has a voluble Julia Roberts-type quality. But she raises her eyebrows as if to say ‘please, don’t go there’ when superficial subjects such as her fashion and beauty routine get broached. “It’s just not me,” she protests, and says the coral-red polish on her nails is Marnie’s color, not hers.

It seems Williams isn’t worried about what she’s wearing when she comes into the lens of the paparazzi. “My mother says since I was young, I never left the house not looking pulled together. I do that instinctively. Hopefully, I won’t get caught looking like I’m in my pajamas.”