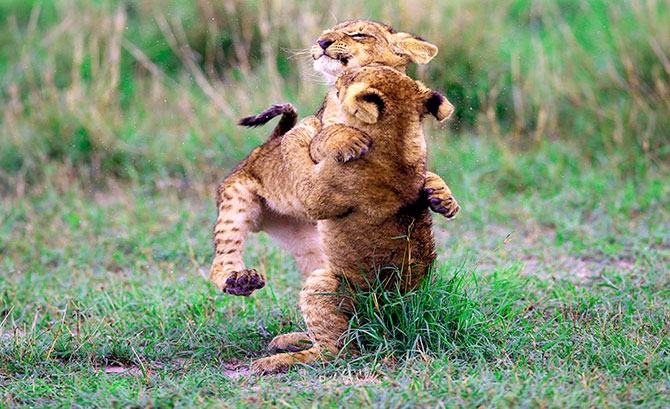 It was raining heavily that first morning at Duba Plains, Botswana, enough that our guide, Solly asked if we were even interested in heading out for our morning game drive. He quickly realized the absurdity of his question. After an hour of slogging through the rain – drenched floodplains in our Range Rover, we were rewarded with the sighting of a nursing mother lion and her three young four-month old cubs. These were our first lion cubs – and we spent hours photographing their antics with each other and their mother-everything from rousing games of tag to wrestling matches to incredible aerobatics. All the while, the mother lion kept a watchful eye, not only on the cubs, but also on potential prey. It was obvious she needed to hunt for herself and her scrawny-ribbed youngsters. That morning something clicked in both of us (besides our cameras), transforming our lives forever as we became determined to make a difference and help save these Big Cats.

Daily life is not easy for the Big Cats. While physically larger and incredibly more powerful than most other animals, dinner is never guaranteed, nor is their future. These lions not only have to ward off other predators who are equally interested in the spoils, but they many times may fight amongst themselves. The mother lions also need to protect their young cubs and that sometimes means hunting alone, without the help of the pride. The logistics of this presents incredible difficulties. Solly explained the challenges are so great that they don’t put a high degree of certainty on a cub’s ability to survive until it reaches the age of three. These challenges are magnified exponentially by the continent’s burgeoning human population (resulting in loss of habitat, prey decline, pesticide use, hunting and poaching).

The Big Cat population around the world is disappearing at an alarming rate. Lions, estimated to have once numbered over 450,000 in the 1940's now are estimated at fewer than 30,000 in Africa, and in just 25 percent of the species' original natural habitat. Extinction is a very real threat – in OUR life time. The same threat holds true for the Big Cats around the world, including the tiger, the cheetah, the snow leopard and leopard, the jaguar and the cougar. And as any scientist will tell you, when you take away the chief predator of an ecosystem, you forever alter that ecosystem and its underlying food chain.

Shocked by these statistics, we are committed to raising awareness and funding to support the preservation of the Big Cats. This year we are partnering with Panthera, whose mission it is to ensure the future of wild cats through scientific leadership and global conservation action. Panthera’s approach to wild cat conservation is rooted in science and based upon decades of first-hand field experience. To support their efforts, we are organizing a wine and hors d’oeuvres silent auction evening in New York City on October 2, 2013. Some of the world’s greatest Big Cat experts will be attending and the proceeds will benefit Panthera’s conservation programs in the field. We welcome your interest and participation. For more details, please contact Evan Schiller or Lisa Holzwarth at savebigcats@bigcatshots.com