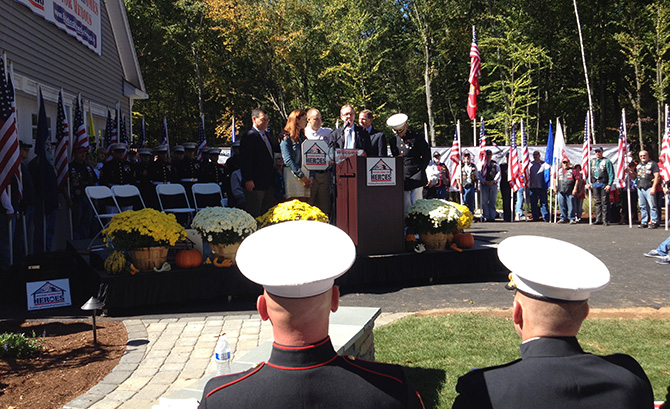 As co-owner of the construction firm Hobbs, Inc., Scott Hobbs is known in Fairfield County for the beautiful custom homes his company has built here. Less well known is the fact that, as an army veteran who served at the time of the first Gulf war, he is attuned to the needs of veterans and the issues for American soldiers on the ground throughout the world.

Although the wars in Iraq and Afghanistan have wound down, the effects of active duty service in these countries have left thousands of veterans with life-changing disabilities, and scars that are both visible and invisible. Scott Hobbs talks about current efforts to help.

“Most people know we should be doing more for our wounded veterans, but they don’t necessarily know how,” says Hobbs.

This past year, through the Marine son of one of his company’s project managers, Hobbs became aware of the efforts of a group called Building Homes for Heroes, founded to help the most severely wounded servicemen get appropriate housing.

“It’s not enough for someone with serious disabilities to just get accessible housing,” says Scott. “but a place to live needs to be in a supportive neighborhood—with friends and family nearby—and also help a veteran live a contributive life.”

In September, Hobbs’ own company team and many of his subcontractors worked through Building Homes for Heroes, with upstate Connecticut contractor, Nordic Builders, as well as other sponsors, to build a home for a Marine veteran in Ellington, Connecticut. The wounded vet had lost both legs and sustained severe injuries to his right arm. The house, completed and dedicated on September 28, offers USMC Sgt. Caron and his family a fresh start in life.

“The organization will be starting two more projects in western Long Island, and we’re also looking for recipients in Westchester and Fairfield Counties, We look forward to assisting," notes Hobbs. “This is one of the most fulfilling things we’ve ever been able to participate in. It’s a cause that ordinary people can support."

For more information about how to help, go here.

While Building Homes for Heroes is the latest effort by this Fairfield County vet, it’s not the first. Several years ago, a program to bring comfort to children in war-torn Afghanistan, led him to spearhead an outreach effort by the Rotary Club in New Canaan, later joined by the Darien club.

Through an employee at Hobbs, who had an active duty family member in Afghanistan, Scott helped organize a holiday drive in New Canaan to collect stuffed animals for children there, facilitated by service members overseas. These furry friends, collected at the New Canaan Public Library from local children, and then sent overseas, became concrete offerings of caring and friendship between the U.S. and Afghanistan; they have also made a positive connection between children and the service members who helped to distribute them.

“These stuffed animals make a great impact on a child who may be in a hospital, an orphanage or a refugee camp. The children’s joy on receiving these little gifts has touched the hearts of everyone involved,” says Hobbs.

While the local program has wound down, efforts by the non-profit group Afghan Children’s’ Project are still ongoing—assisting children and women in that country with support for grass roots medical and educational efforts. More about this organization can be found on its website.