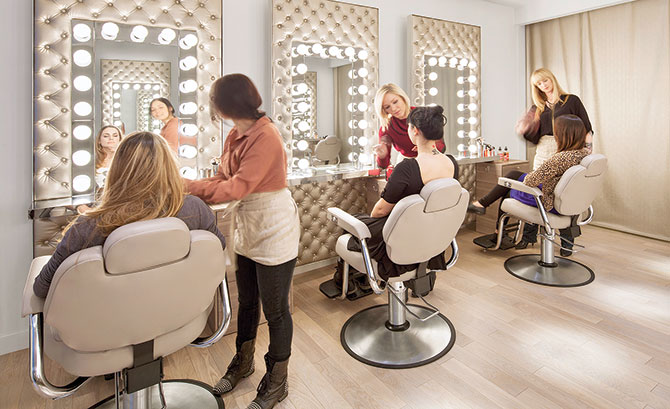 Heading into the city – big meeting, first date, massive fundraiser or possibly bumping into an ex? Look your best. Introducing New York City's first makeup salon: Rouge New York. Here, under the old Hollywood glam lights, your makeup will be done perfectly. Choose from a natural look, called You…Only Better ($50); up it with Bold Choice ($60); or go all-out goddess with Total Polish ($75). Touch-ups are only $25. Rouge is brought to you by cofounder/Head Makeup Artist Rebecca Perkins and cofounder and actress Stephanie March – they became friends on the set of Law & Order SVU. They researched the best lines of cosmetics and carry only their favorites, though you can bring your own if you perfer. We love their concealer trio for perfect coverage. Enjoy the star treatment!

In the midst of NYC midtown's glitzy department stores and animated billboards, you can enjoy historic glam for a steal. On March 1 The Wolcott Hotel celebrates its 110th anniversary. Designed by John H. Duncan, who also designed Grant's Tomb, is noted for its pink brick and limestone facade. Like literary name dropping? Past guests include Mark Twain, Edith Wharton and Henry Miller. Music your thing? Buddy Holly spent time here, too. Pop culture? Its ballroom serves as a backdrop for magazine photoshoots, such as GQ, and for movies, most recently, John Wick, starring Keanu Reeves and Willem Dafoe. Nap a $110 rate this March at this site: wolcott.com/ann110/. Ask about the Shopping Suite, a room just for shopping bags.

Can you name the only Japanese-owned hotel in New York? The Kitano New York, a boutique hotel in the historic Murray Hill district, with a terrace over-looking Park Avenue and the Chrysler Building and celebrating more than forty years. Breaking from the traditional wine-pairing dinner, The Kitano now holds a monthly sake-paired, Kaiseki cuisine dinner. A variety of Japanese-based sake pairings presented throughout a five-course, traditional Japanese meal. Japan-based ingredients and the sake producers themselves are flown in for the occasion.