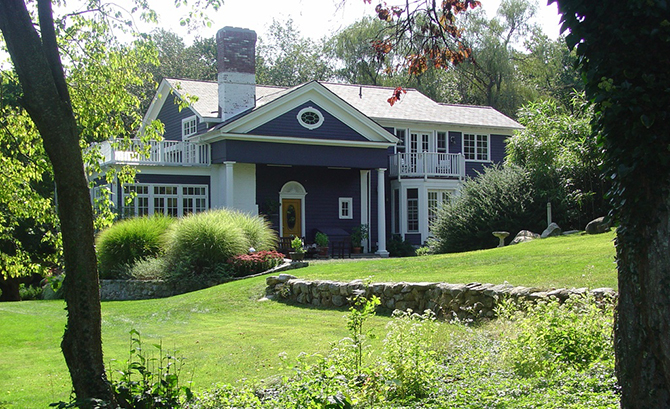 The property comes replete with a storied heritage of names: John Ryder, who built the house from Greek Revival plans; William Boring, Columbia’s Dean of Architecture, who designed several of the structures on Ellis Island and used the property as a summer home; Hamilton Hamilton, founder of the Silvermine Arts Guild (within walking distance), who also lived in and painted landscapes featuring the house; Richardson Little Wright, founder/editor of House & Garden Magazine, the man who added gardens and walls and gave the home its nickname; and Eileen Heckart, the Emmy-, Tony- and Oscar-winning actress, who lived in the house for four decades, hobnobbing with other famed Nutmeggers—notably, Paul Newman, Joanne Woodward and Jason Robards.

“This property, a bit less than two acres, has a long history of being beautifully landscaped—and has now had two separate documentations by the Smithsonian,” says Susan Blabey, of William Pitt Sotheby’s International, who has the listing. Sun House is on the market for $1,999,000.

The antique colonial itself, built in 1841 by Ryder, a master carpenter, was, indeed, altered by Wright. His changes to the landscape and home were detailed some 80-odd years after the initial construction, in Truly Rural and A Small House and Large Garden, lending further documentary richness.

“The Deering family, who were farmers,” continues Blabey, “built the barn and added several outbuildings, some of which still exist on the property.”

The property’s main house boasts more than 4,000 square feet, along with its two guest houses, greenhouse, solarium, heated pool, patio, and pair of fireplaces and gazebo. There are some 10 rooms, with four bedrooms and three full bathrooms (and half-bath), along with a master suite that dips onto a delightful balcony. The organization of the home is noteworthy, as the dining room is situated in the same place as during the 19th century—on the lower level—where the owners, who purchased the house in 1994, now have a family room adjacent.

“The current owners have lovingly restored and enhanced the original landscaping on this property,” Blabey notes. “Once it was truly in tip-top condition, (they) applied to the Smithsonian Institution and then completed the very thorough application and documentation process. This process involves photo and written details of the property; the garden, including the botanical—Latin—names; and, of course, the past and current history of the gardens and landscaping.”

That history includes one of Connecticut’s oldest blooming magnolia trees, which complements the spring-bloomed thyme swathing the stone patio come warmer temperatures. A truly unique property, in a gorgeous, sequestered area g(u)ilded with art and tradition, Sun House is waiting for someone to bask in the many comforts it affords.