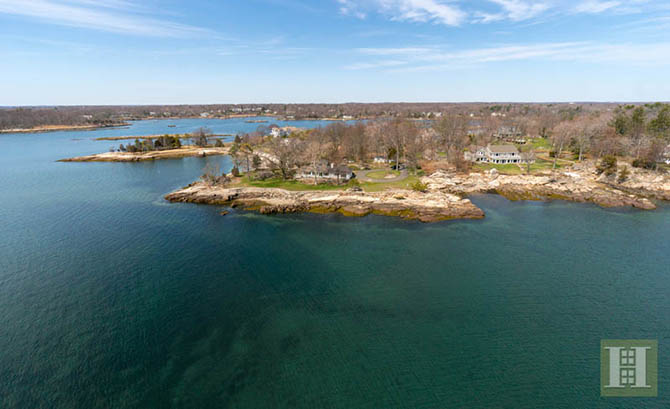 When people use the word “magical” with regard to real estate, the locale sometimes comes up short.

However, when it comes to 53 Contentment Island Road, the word is inadequate. Completely. Once owned by the Lindbergh family, the property includes a private beach, along with eight acres of the Fish Islands, a dock and 1,000 feet of prime waterfront land.

It literally is part of the scenery of landscape masterpieces: John Frederick Kensett, a member of the Hudson River School, painted famous views of the island that now hang in the Metropolitan in Manhattan.

David K. Hawes, who has the $15.5 million listing for Halstead with his wife, Holly, puts the location’s appeal in its proper light.

“If people ask(ed) me to describe this property in one picture, I’d tell you it’s not possible, perhaps not even in 100 pictures,” he says.

Hawes knew the former owners, Dr. Edward A Felder and his wife, Judy, and was quite familiar with the care they exerted to maintain its splendor.

“They took tremendous pride in owning and caring for such a remarkable place,” Dawes says. “Up until about five years ago, Judy would personally care for and maintain the gardens and swim everyday in the summer. … Each season had special occasions for them, which included the fall, where watching a harvest moon rise would be a planned event—a cold winter ice forms and flows along with wintering and migrating birds congregating around and on the islands.”

The house was built by Theodore Rousseau, a former curator at the Met.  According to Hawes, its magnificent views come courtesy of the art historian himself.

“It was his vision that sited the house in a way that every room has a water-view, and each window is like framing a painting.”

The property is also ready for expansion. Currently, the home has three bedrooms and three-and-a-half bathrooms accompanying its two fireplaces, and its overall space spreads across nearly 3,000 square feet. More than these details, what 53 Contentment Island really offers is an ethos.

“It’s not just a view,” Hawes notes. “It’s a feeling you get when you are there, and I’ve spent quite a bit of time there in the past 25 years. Without a sales pitch, I can say it is truly one of my most favorite places on the planet.”