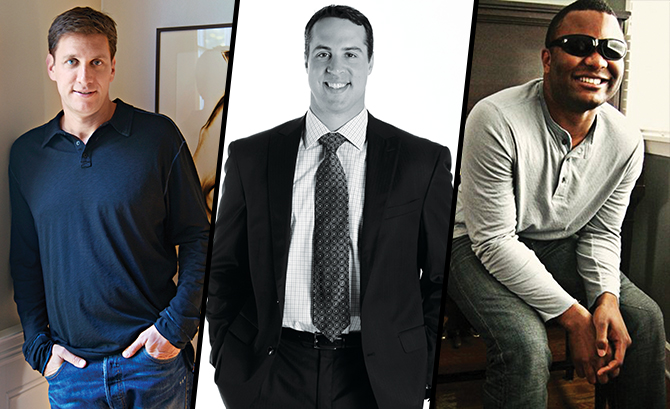 All year GREENWICH magazine has been introducing you to the interesting characters and unique talent behind the scenes of the first annual Greenwich International Film Festival (GIFF). The time has come! The festival rolls into town on Thursday, June 4, and for four days Greenwich will play host to celebs and industry insiders here to support the festival’s panels, screenings and parties (The Voice’s Blessing Offor will perform at the opening night gala and Kathie Lee Gifford will MC the evening).

Individual screening tickets go on sale Friday, May 1 on the GIFF website. Venues include the Cole Auditorium, Bow Tie Cinemas and Restoration Hardware. While there are lots of must-see movies, be sure to check out the panel discussions around town—they are free and set the film festival vibe of art innovation and education. Here, a few of the fun panels the GIFF team has put together. Enjoy the show! greenwichfilm.org

THURSDAY, JUNE 4
Sports Guys on Sports
What’s the best sports movie of all time? Bull Durham, Rocky, Any Given Sunday? How about best movie based on a true story? Friday Night Lights, The Blind Side, Rudy? A panel of athletes and ESPN on-air talent will share their opinions in a discussion of the classic debate. The event will also include a happy hour and fun audience activities.

SATURDAY, JUNE 6
The Changing Face of Television
Most agree that after HBO debuted The Sopranos, television has never been the same and has even impacted the film industry. With Showtime, AMC, F/X and digital platforms like Netflix and Amazon Prime getting in on the action, contemporary television has managed to court Hollywood stars and garner serious critical acclaim. Industry insiders will discuss the current landscape of television and the cutting-edge programming that’s brought new respect to the small screen.

SUNDAY, JUNE 7
Social Impact
What makes some humanitarian issues more media-friendly than others? Given the vast number of human rights stories today, it’s inevitable that some will be downplayed or even ignored in favor of others. What’s the tipping point? The panel of filmmakers, human rights experts and humanitarians will discuss the role of film and media in proliferating global social issues.