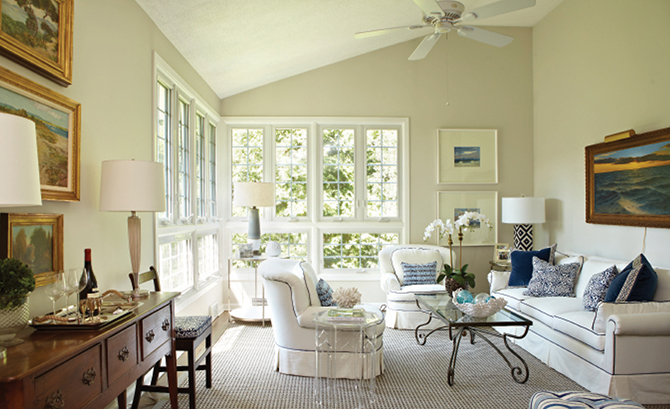 1. THE CHALLENGE
Inspired to make a lifestyle change, Sutzie Canzonetti left a large Colonial in Darien for a house in Rowayton that’s big on charm but half the size of her old place. She wanted the new space to feel contemporary, but she didn’t want to give up all the furnishings from her previous home, which while beautifully decorated, was very traditional in style. Sutzie turned to designer Carey Karlan for advice on what to take, and how to make it work in a new setting.

2. THE PROCESS
The first thing they did was measure and photograph Sutzie’s pieces. Carey then put a measuring tape to the new house and determined that Sutzie would have to leave more than half her furnishings behind. “When deciding what must go, think about emotional attachments. Keep the things that have meaning for you,” says Carey. Sutzie wanted to keep her impressive art collection. “She had a lot of oils, but we didn’t use all of them in the decor. We also installed prints and photos to create a layered look.” Antiques also were important to the homeowner, so Carey found ways to give vintage pieces a modern spin. A prized sideboard in the living room, for instance, was lit with contemporary lamps and set on a sisal carpet.​

3. THE PALETTE
In her previous home, Sutzie had a traditional palette of jewel tones that while well done felt a bit dated. For her new home, she wanted a fresh, beachy feel. To create that atmosphere, wood floors were stained grey, and Carey brought in lots of blues and whites. Sutzie was able to keep some of her existing furniture, too. She reupholstered a few favorite pieces, including a camelback loveseat (photo at top) that’s now covered in a bright chevron fabric. Says Carey, “On that piece, it was fun to do the counterintuitive thing.”

EMBRACE SMALL
The small and narrow dining room (top) could have been written off as a passageway, but Carey made it a destination instead. “We emphasized the space with chevron paper that’s exciting and makes people want to go there.”

MIX IT UP
The wallcovering is countered by an antique sideboard. The oil painting above it is in its original gold frame, but another piece of art in this room was set in a white shadow frame with architectural lines that help to add even more interest.