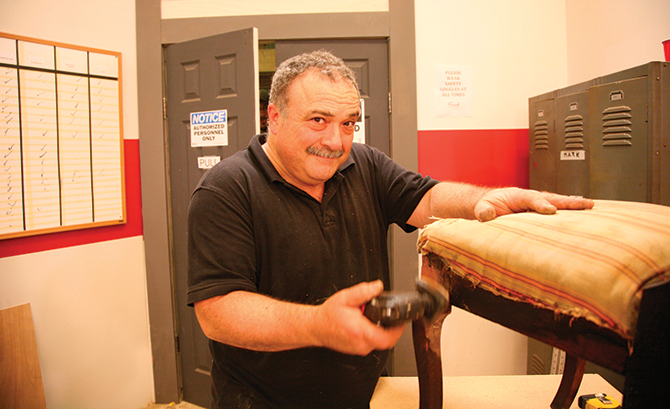 When Mark DeVito was a boy, he would hang around Raphael’s Furniture, the Stamford workshop his father, Ralph, ran since he opened it in 1952. A former craftsman at the mill yard of the closed Danersk Furniture, Ralph DeVito, along with former workmates from the furniture factory, mentored his son in everything from wood turning, inlay, and veneer to finishing, upholstery and cabinetry. “I would be there after school,” says DeVito. “I didn’t yet see the artistic side of it.” That came later, when DeVito turned sixteen and joined his father’s business, which was later renamed Raphael’s Furniture Restoration.

Thanks to all the tutelage, and years of practicing his craft, DeVito is now known as the go-to furniture artisan in the area. But don’t just take our word for it. Lara Spencer of Good Morning America also thinks so; she recruited him to be Furniture Guru on her HGTV show Flea Market Flip. “I’d worked with Lara for years and didn’t know who she was,” he says, laughing at the memory.

Now in season five, FMF shows a team of experts scouring fairs for deals to be transformed. “At first I thought I’d advise,” says DeVito. “I didn’t know I’d be in the show!” Check hgtv.com for listings; DeVito is easy to spot, often doing the furniture makeovers himself.
6 WAYS TO SPOT A REAL ANTIQUE
“Look for signs of handwork,” and think of an “antique as anything made before electricity, [therefore] not machine made,” says Mark DeVito. Here are DeVito’s ways to recognize the real deal on your next flea market excursion.

1 LOOK FOR FLAWS
Uneven scratches or dents, or contraction in the grain of the wood are a good sign.

2 CHECK THE SEAMS
These shouldn’t be smooth to the touch. Look for slight separation.

3 INSPECT THE  DRAWERS
The dovetail joints should be irregular.

4 WEAR & TEAR
Drawer runners should show signs of overuse. Worn, even mismatched decorative hardware is a sign of age.

5 EDGES & CARVINGS
These should not be perfectly shaped or carved symmetrically.

6 THE ODOR TEST
When in doubt, take a deep breath. If it smells of fresh wood, it’s probably a reproduction.