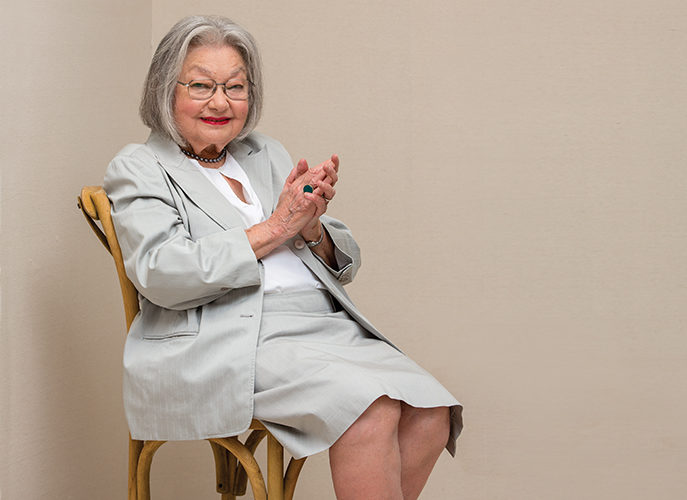 Vivien White and her late husband moved to Stamford in 1956, when a friend suggested they check out the area. Vivien, who majored in chemistry at Wellesley, was working for Interchemical Corp. in New York at the time, but was so impressed by Stamford that she chose to give up her job and focus her energy here. “Stamford was such an active, interesting, diverse city then, as it is now,” says Vivien. “There were so many ways to get involved in the community that that’s what I did.”

Vivien served on the Connecticut Commission of the Arts for twenty-five years, where she helped to seek out and nurture emerging artists. “I liked the breadth of their outreach to the whole state and to all disciplines in the arts,” comments Vivien, who has a scientific mind but the arts in her heart. “Both my parents were amateur musicians, but with a passion,” she explains. “I studied piano for a long time. My mother played piano in the silent movie houses. My father was a physician but fancied himself an accomplished tenor. I grew up in Chicago, a very rich, active, artsy city. With that combination, I couldn’t avoid a love of the arts.”

Vivien served as vice chair of the Stamford Cultural Development Corporation (SCDC), which offered grants and free consultations to artists and arts organizations. “That was a marvelous organization, which unfortunately went out,” says Vivien. “It filled an important niche, which we need now.”

Vivien has also held leadership positions on the boards of the New England Foundation for the Arts, Stamford Community Arts Partnership Program, Urban League of Southern Connecticut—and the list goes on.

“I like to say, I don’t play tennis,” chuckles Vivien, when asked how she does it all. “I’m also involved with the youth services organization Domus,” she adds. “Its charter schools here, Trailblazers and Stamford Academy, serve underprivileged kids who have a hard time making it in the Stamford public schools. As a volunteer, I’ve been finding resident artists in all disciplines to sit with the kids and help them produce art. It really enriches their lives.”

In addition, Vivien is an active supporter of Silvermine Arts Center, Stamford Loft Artists Association, Treetops Chamber Music Society, The Ballet School of Stamford and Connecticut Ballet. She still finds time to enjoy the arts in New York as well. “I love New York. I love Lincoln Center,” she says. Vivien has a son in Austin, Texas, and three grandchildren whom she enjoys seeing often now that they are in college in the Northeast.

Juanita James, former Light a Fire winner and CEO of the Fairfield County Community Foundation, comments, “Vivien White has devoted her life to championing the arts. She and her late husband, Arthur, spent decades together marching to the beat of the same drum, as community activists and humanitarians.”