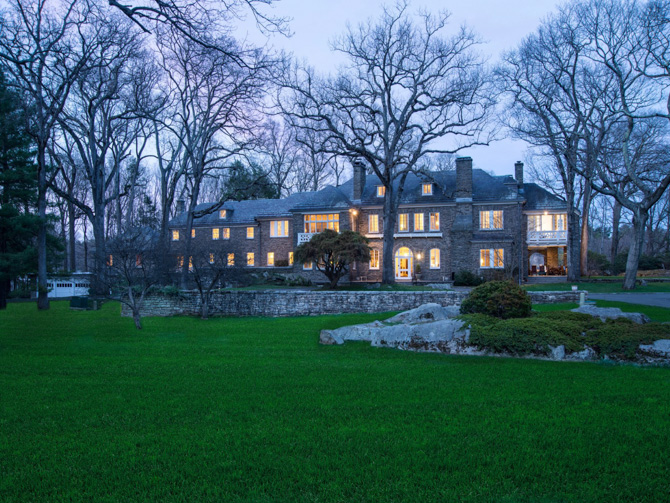 On Doubling Road in Greenwich, a 100-year-old estate is luring buyers in search of a home with an interesting history and friendly formality. The three-story, 14,000-square foot cut-stone residence couples a conversation-worthy backstory with old-world spaces that should appeal to those with a passion for classic architectural detail. Leaving a pre-war building in Manhattan to feather a much larger nest in the genteel suburbs? This listing could be of interest to you.

Pedigree: This English manor was built in 1916 as a working estate for the family of Albert Wheeler Johnston, who made his fortune as a mining engineer and served as president of the Canadian company Teck-Hughes Gold Mines. After retiring, Johnston began a second career as a publisher when he bought the Daily News-Graphic in 1936; he changed the name of the paper to Greenwich Time. Johnston started buying land in mid-country Greenwich in 1909, accumulating 54 acres by 1916. That year, he retained architect Theodore E. Blake to design this house and the landscape that surrounds it and was best known for his part in designing the New York Public Library. Johnston died in 1952 at age 81, yet his family’s mansion retains its turn-of-the-century elegance.

A True Beauty: The house sits on five-plus acres; that is, five lush acres with mature plantings that go a long way toward distinguishing this residence among its peers. The gardens were modeled on those of Leningrad’s Winter Palace and are planted with azaleas, rhododendrons, peonies and roses that have grown lovelier with maturity. A pool and pool house were added to the landscape. One of the nicest features on the property is the sunken tennis court. It’s hidden from view in what was most likely a garden decades ago, and it’s surrounded by handsome stonewalls rather than the more typical chain link fence.

Town and Country: One of the key benefits of this property says listing agent Heather Platt of Sotheby’s is its location. “It’s unusual to find a place with this much land that’s located so close to town,” she says. “That’s hard to come by today because so many properties in the area have been subdivided.”

Inside Job: Inside the house, it’s all about craftsmanship. Intricate paneling and detailing throughout are hallmarks of another period in estate construction. Certain features are typical of turn-of-the-century homes, including the two-level entrance hall with fireplace and striking staircase; it was a requisite of the English country house at the time.

The Entertainer: Big living rooms and dining rooms are scaled for parties, and both open out to covered porches that extend the entertaining spaces. There’s a paneled library, too, which is rumored to have once been part of the quarters of a ship’s captain. These spaces have parquet floors, wood paneling, lofty ceilings and plaster fireplace friezes. Want your guests to feel as if they’ve just entered an Edith Wharton novel? The ambience is built-in here, although the Queen Anne floor plan also feels open and informal, despite the size of the rooms. “The original owner designed this not as a formal house but as an English country estate, so that all of the rooms could be used on a daily basis and function in a formal sense when necessary,” says Platt. “The atmosphere is friendly, cozy and intimate. As massive as the house feels on the outside, it offers very comfortable living spaces. And there’s not a room in the house you won’t use.”

Family Time: For kicking back there are casual spaces like the eat-in kitchen and adjoining family room, as well as the billiard room and lounge on the lower level. Upstairs, there are five bedroom suites, plus a master suite with sitting area and office. (Connected to this floor and accessible by a separate staircase are quarters for domestic help). The third floor has a bedroom with bath, and a craft studio.