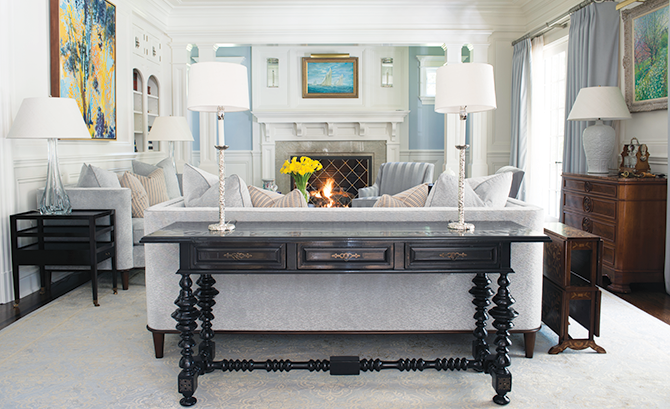 A maxim of good design holds that a home should tell the story of who the owners are and be a collection of what they love. But the process of pulling together the parts of their lives in a way that makes sense and looks seamless is an artful balancing act.

Rob Rizzo of Cobble Court Interiors was up for that type of creative challenge when Jack and Lisa McCarthy asked him to decorate the 12,000-square-foot home they’d bought in New Canaan. The couple had been in a smaller house done over in what they called an Old English style, with antiques they’d acquired in London, where they lived years ago. Jack and Lisa wanted those pieces—which have sentimental value—in the new house, but they also hoped to integrate a fresh and contemporary aesthetic that would reflect their lifestyle as parents to two active girls and caretakers for one imperious cat and a pair of goldendoodles.

Rizzo was recommended to the couple by Jack’s aunt and uncle in New York, who had worked with Cobble Court on a few projects. “Our style and expectations were very different from my relatives’,” says Jack, “but that speaks to Rob’s ability to create a unique look for each client. We knew he’d done everything from traditional to contemporary design, in locales ranging from the waterfront to the mountains, and that range appealed to us. We’re really impressed with his artistic talent. That, and the process employed by Rob and his partner, Steven March. The project was incredibly well-organized, with no surprises.”

Rizzo’s peers report his solid reputation rests on his refined taste and ability to beautifully orchestrate all the elements in a room to sophisticated effect. But the designer contends a good ear goes a long way in his business, too. “I’m a great listener,” he says. “I pay attention to what the clients want and I collect a ton of information. I never work with preconceived notions of what a place should be.”

“Rob is a very talented designer who does all his design work by hand. He’s old-school,” says March, who runs the back office operations at Cobble Court. A former Wall Street exec, March left that profession after the September 11 attacks, when he was in the South Tower. He ended up spending more time in Litchfield, Connecticut, where he and Rob had a weekend home. Soon after, Rob left his job as creative director of an advertising agency. It was during a walk in Litchfield down a street named Cobble Court that the two came upon a carriage house and got the idea to convert it to a home décor boutique. That was in 2002. They relocated to South Avenue in New Canaan in 2008, where they are today. Since then, Cobble Court has expanded its portfolio, which now includes residential projects in Manhattan, the Hamptons, Palm Beach and London; commercial work includes luxury suites at the Ocean House in Rhode Island.

The McCarthy project was a bit different for Cobble Court, as this firm often does new builds and renovations, getting involved in design and construction work from the groundbreaking on. The McCarthy’s place was built as a spec house in 2011 by Country Club Homes. Michael Smith was the architect who produced the overall design and also shaped the handsomely detailed interior trim, ceilings and cabinetry. The house sat for a while through the tail end of the recession, until Jack and Lisa bought it two years ago. The bones of the home were young, strong and attractive. Rizzo was brought in to lushly feather the empty nest.

His work began on the first floor, where he focused on blending the couple’s collectibles with new pieces that were beautiful, comfortable and family-friendly. “In their previous home, there were many lovely antiques, but no one knew where to sit,” says Rizzo. “Here, we spread them around and surrounded them with the soft lines of contemporary furnishings, which allow the vintage pieces to stand out.” The formal living room showcases a rich mix. The mahogany longcase clock crafted in 1780—the couple’s first investment-quality piece—marks the entry to a serene space anchored by Lewis Mittman sofas and embellished with Holland & Sherry drapes set off with Zimmer + Rohde sheers. And the nautical oil painting with the formal vibe over the fireplace plays beautifully beside a modern piece from a gallery in Palm Beach. There’s a combination of woods and finishes, too, but all is grounded in a palette of blue-gray. “It’s a room that feels collected,” says Rizzo. Neither strictly modern nor classically traditional, his approach here is transitional, which means when someone walks in a decade from now, they may not be able to tell when it was done.

In the formal dining room, a custom table was designed with curved edges to soften the muscular crown moldings. The table is paired with chairs covered in a fabric by London-based Designers Guild, which Rizzo calls “bulletproof” as it can be wiped down to clean. A new piece in the room is the Esteban Vicente oil on canvas over the fireplace. Cobble Court brought in New Canaan gallery owner Heather Gaudio as an art consultant. She assisted the McCarthys in the selection of this piece and others, including a knockout marble sculpture by Paul Bloch that grounds the décor at the foot of the grand staircase. “The pieces Jack and Lisa selected speak to their interests, but also integrate really well with the furnishings,” says Gaudio. “Everything in the house is high quality. The art brings it all home.”

Like any designer worth his salt, Rizzo is obsessed with details and skillfully finishes off each space with a tailored flourish. In the library, for instance, the architectural wood beams and trim are complemented by a custom wood desk, leather chairs, Stark carpet and Ralph Lauren wall covering that’s finished with a tidy double welting by Samuel & Sons. Texture, it seems, is in Rizzo’s DNA. There’s more evidence of that in the foyer, where the petal pattern in the brilliant Ironies chandelier is picked up in the pattern of the custom carpet beneath it. And in the great room, the rustic mood that’s set by the rough stones of the fireplace is countered by the coolly smooth surface of a killer stone table Rizzo sourced through Artifacts International.

Upstairs, the designer created personal spaces for each family member. For the oldest daughter who’s a competitive rider, he installed a horse photograph by Michael Eastman near the door to her bedroom, and the double-sided drapery panels around her bed were made with an equestrian fabric. Rizzo also found a rack for the ribbons she’s won, and he installed horse-shaped hardware in her closet. Yes, he sweats the small stuff.

Down the hall, the youngest daughter selected her own wallpaper, which sets a vibrant blue background for fun furnishings like an Andrew Martin bubble chair, beaded curtains and a built-in window seat that Rizzo fitted with an extra-thick cushion for sleepovers. Of course, Lisa needs her own personal space and sanctuary, so Rizzo glammed up the sitting room in the master suite with a grasscloth wall covering and a statement mirror by Ironies. All of the furnishings were installed before the family moved in, so for the most part the house is done, including the lower level, which Rizzo converted from an empty room to a warm entertaining space that looks like an authentic English pub. “The process was so non-stress,” says Lisa. “Rob and Steve made it all very simple and straightforward.”