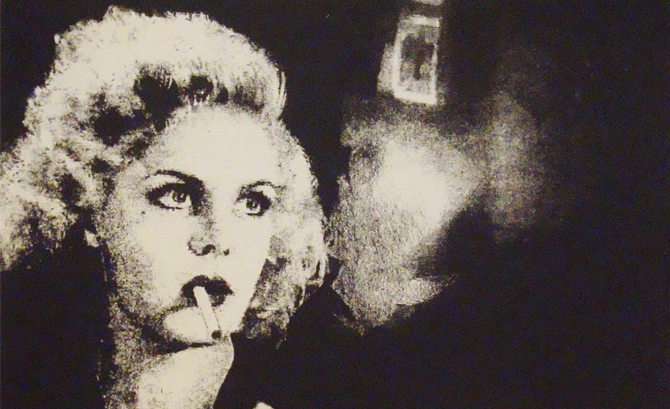 Ann Chernow is a bad girl, or at least she aspires to become one. And she does it with the style of a true diva, whose talents know no boundaries.

Chernow’s latest spree is “noir,” and she goes about it with unbridled passion, as she steps into other eras where she is at her artistic best.

“Film Noir” (black film) depicts the movies that evolved from the steamy dime novels of the ‘30s, ‘40s and ‘50s, usually shot in black and white and filled with crime, violence and overt sexual decadence. It was a time when men were all muscle and brawn, and women dripped rhinestones as big as doorknobs, their platinum manes flung over their ermine furs, as they sipped pink champagne in dimly-lighted nightclubs. Cigarette smoke curled around them, enveloping the room in a hazy glow, while Louis Armstrong belted out melancholy tunes on his trumpet amidst the heady aroma of cheap perfume. Chernow captures it all in her litany of artistic mediums.

Born in New York City, her family moved to Rochester, New York, and returned to Flushing, Queens when Chernow was nine. It was there she discovered her artistic calling early. As a teenager, her favorite pastime was hanging out at Keith’s RKO, where the onscreen femme fatales and gangsters kept her riveted. Saturday afternoons at the movies induced in Chernow a longing to borrow her favorite screen idols and turn them into art. Her particular interest was “noir,” which not only reflected a dark mood, but became a blank slate on which she would ultimately craft her iconic shady characters that began showing up on her canvases.

Chernow’s own world was inhabited by women: two sisters, a cluster of aunts and a mother who encouraged her passion. Her father, a traveling salesman and bandleader, spent much time on the road, while Ann and her female entourage flocked to Manhattan’s Orbach’s and Klein’s, to dress the part of the glamor girls they emulated and admired.

“We were very poor,” she says, as she lifts her paintbrush to rouge a siren’s cheek with a smidgen of crimson paint. “Only we didn’t know it. We were too busy living life.” And, to this day, she still creatively lives that life with which she identifies so closely.

“I loved the look of padded shoulders,” she articulates. “The seamed stockings, the pouty red lips and veiled hats.”

All of that is evident in the art she creates, which has won her many awards, too numerous to count.

Chernow’s studio, attached to her house, bulges in artistic excess. Remnants of the past are everywhere and are steeped in nostalgic splendor. Her walls exhibit works-in-progress. It is where ladies with funny names stare out from behind their gaudy frames. Floral hat boxes line the ample shelves. Mannequins in hats, buckled shoes and clutch bags from the ‘40s allow visitors to feel as though they have entered a time warp, momentarily leaving the 21st century behind. It is a world filled with paintings and etchings, all reminders of a past that Chernow still embraces.

Chernow’s mentors were many, and her influences are varied. As a girl, she hung out at the Arts Student’s league, spent two years at Syracuse University, and went on to earn a Masters degree from New York University’s Department of Fine Arts.

Through the years, I have been fortunate to follow Chernow’s work. This connection has allowed me private showings in her studio, where I watched her art evolve and continue to delight, as she salaciously astonishes us with her brilliance. The captions beneath her “noir” dames are legendary, each one depicting a specific theme. It is not unusual to walk away from a Chernow exhibit feeling an intimacy with her characters – the brooding blondes and their bad boys, who blow gunpowder off their revolvers – or a trampy broad pausing to adjust a garter. They are all there on the walls beckoning us in. When studying a Chernow print or painting, conventionality disappears. For a moment we are catapulted back into that dangerous time where her characters seem to come alive and mingle among us.

It is in this dark, edgy world where Chernow feels most at home. It’s that place that keeps her up at night, watching old black and white films on Turner Classic Movies, where film noir is best exemplified. It is these movies that draw her to this hauntingly moody and seductive genre.

Chernow’s art has made her not only a local Westport celebrity, but also an international sensation, as she lectures widely throughout the country and abroad. She struts her stuff from galleries in New York’s Chelsea, to Santa Fe, Provincetown, San Francisco, the Bulgarian Collection in Lessedra, to Nice, to name only a few. Her pieces reside in the Metropolitan Museum of Art, The National Gallery of Women in the Arts in Washington, D.C.  The Tel Aviv Museum in Israel, the Yale University Art Gallery, and The Brooklyn Museum, and are all part of their permanent collections.

The Westport Arts Center will be exhibiting Chernow’s work in a solo show drawn from her collection of pulp fiction covers depicting two kinds of art: black and white, and color. As Ann explains: “There is a range of work from pulp novel covers inspired by the ‘30s and ‘40s, which led to ‘film noir,’ and then became known as simply ‘noir.’ My work is romantically charged,” she adds, “as though we ourselves are etched into the art. ‘Noir’ is present in us all.”

Such a notion titillates and encourages us to return to that time when psychological thrillers were a reality. A time when good girls really could slide into debauchery, nice boys actually became “Wise Guys,” and the dark, unveiled side of human nature was in fact seductively revealed.

Screen legends like Bette Davis, Katherine Hepburn, Barbara Stanwyck, and Joan Crawford are among her female muses. Men like Cagney, Bogart and George Raft strongly represent her kinds of guys. Leggy showgirls abound, and vamps like Jean Harlow slink through Chernow’s canvases as though they are floating on air. Imagined grand entrances and exits prevail. Stolen kisses are acted out in shadowy hallways, and if a bad girl wasn’t careful, she could cause cardiac arrest in any man standing in her way.

It was a time of rumble seats and roadsters when people drove with the tops down, hair flying in the wind. Girls knew how to flirt and were intoxicatingly provocative. Chernow captures it all with sweeps of her brush. So stunning are her paintings and etchings that after witnessing only a few, I am tempted to pick up a cigarette, wrap my “gams” in nylon and drape myself in mink.

Chernow’s women run the gamut from seductive to tough to sexy. Her men are corrupt, handsome and unrestricted. And yet, the softer side of “noir” is also present. There is a melodramatic tone to her work, filled with heartbreak, disappointment and unfulfilled dreams. Each piece of her art tells a story, which depicts emotions we all feel, and to which we can relate. These guys and dolls mimic our own personas, and in that way, Chernow plays many roles: artist, filmmaker, actor, and director. The connections intertwine and are extraordinarily compelling.

Because I am no stranger to Chernow’s work, I find it irresistible not to own a few of her pieces. A particular lithograph, “Rendezvous in Black,” hangs on my wall. Beneath the title is a plaque that reads: “From the Moment They Met It Was Murder.”

Such is the life of Ann Chernow, which in turn brings out the bad girls and bad boys in us all. Chernow creates moods. She is the master of nuance. She reaches us through her art, and what better compliment is that?

Now in her 70s, she has no intention of quitting. She has become a lasting legend, who merges past with present and inspires in us a sense of adventure waiting to be explored. Her art stops us short, makes us think, and moves us to new heights.

Observing her lithograph titled “Mona Lisa” with its caption – “I wouldn’t give ya the skin off a grape“ – Chernow’s abundant sense of humor is evidenced.  She was a feminist before the term was popular, and she refused to conform to the expected mores of the stereotypical 1950s housewife.

“I was busier making art,” she said, “than cooking lamb chops.”

“The women in my work are all me,” she adds, and she introduces snippets of her own life into many of her works.

Chernow’s charm is palpable as she flaunts her men and women with unabashed, playful and uninhibited abandon. Her characters are on the verge of a mad seduction, and a touch of impropriety is always in the air. Trouble lurks behind half-closed doors, and there might be a glimpse of a leg gracefully protruding out from the side of a canvas.  Along with a winking eye, or a hint of cleavage, a sense of exquisite artistic foreplay is ever present.

Her “babes” never work at being bad. They simply are. The lowered eyes, demure smiles and their insouciant wiles exude their naughtiness. They are mysterious and foxy, their men virile, violent and deliciously scary. Back then, no one went to couple’s therapy. If there was “Trouble in Paradise,” a belt in the kisser took care of everything. That is the place where Chernow resides and thrives, and she herself is as elusive, earthy and beguiling as the people she paints.

Chernow pauses to reflect. “I need to live 200 years to finish all the projects I have in me,” she says, with a tilt of her head and a dreamy look in her eyes.

And we, the admirers of her work, wish that she could. But, there is no doubt that her work will endure. This spring, you’ll find her “film noir” pieces hanging in the Westport Arts Center, where Chernow, the Queen of Noir, reigns supreme.