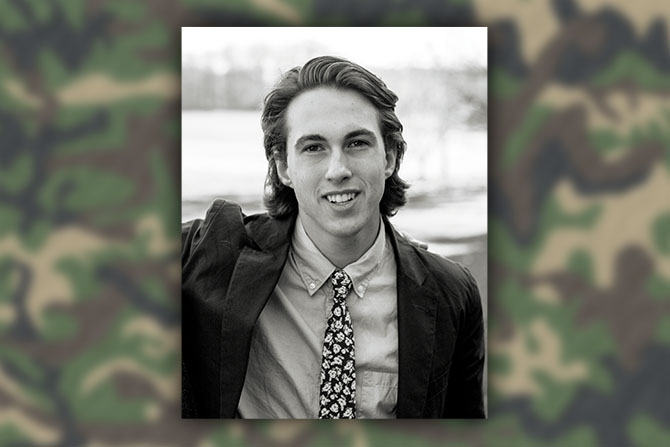 But Ryan soon felt like the treats and the cash he raised weren’t enough to engage students in supporting vets for the long haul. “Money is so one-dimensional in this cause,” says the eighteen-year-old Greenwich Country Day School alum. “It carries intrinsic value—and it helps—but I wasn’t sure it was the kind of value that would really make an impact on the students.” So Ryan recruited them for a call to duty through words. He began writing letters to soldiers stationed around the globe and asked his classmates to do the same. His nonprofit, Talk2Troops.org, was conceived with the idea that through old-fashioned letter writing, his peers would better appreciate the sacrifices of American armed forces members.

“In my generation we’re all kind of consumed by technology and don’t write letters,” says Ryan, a three-sport athlete who finished his final season quarterbacking St. Andrew’s football team last fall. “This is a way for us to take a time out and dedicate a few hours to doing something small, but something that has great meaning.”

Ryan has managed to have more than 1,000 letters shipped to soldiers through his partnership with Operation Gratitude, a larger nonprofit that organizes care-package deliveries to troops in conflict zones. (The Talk2Troops letters are tucked inside care packages.)

His initial pitch to his fellow students, faculty and staff didn’t yield sacks of letters overnight. He ended up going door-to-door in dorms to compel the campus troops to take action. “There was some pestering,” he laughs. “I think people weren’t sure what to write or what to say to a stranger.” Through the Talk2Troops website, anyone interested in writing a letter can get instructions on how to connect with a soldier, but Ryan’s advice is to keep it simple and genuine. “What I’ve learned is that they miss home and like to know what’s going on here,” he says. “And they are blown away that people care enough to take the time to write.”

WRITING FROM THE HEART
Ryan notes many of his peers were intimidated about corresponding with American servicemen and women because they weren’t sure what to write. Here, his tips for writing to the troops:

1. MAKE IT PERSONAL
“Tell them something about yourself and your life that may remind them of home,” says Ryan. Sharing an anecdote about a game he played or a school project is one way Ryan strives to keep his letters informal and authentic. “You don’t want it to sound like a form letter.”

2. TALK ABOUT AMERICAN PASTIMES, HOLIDAYS AND TRADITIONS
“I find the soldiers really miss American sports and American food and enjoy hearing about those things,” Ryan notes.“What I’ve learned is that the military life is so different from the life we have at home, they like to be reminded of the things they enjoy here that they miss and they look forward to enjoying again.”

3. THANK THEM FOR THEIR SERVICE
“The most important thing you can do is make them feel appreciated and valued,” says Ryan.