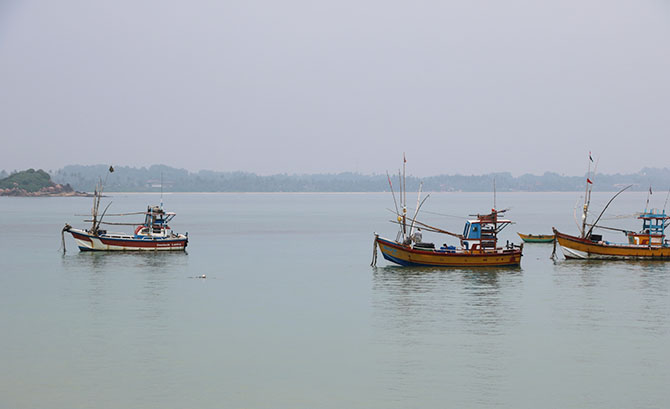 Photography by A. Rosen

Photography by A. Rosen

Eight thousand miles away, just off the southern coast of India, lies a tropical paradise that has become the darling of travel experts worldwide though it is scarcely on the radar of most American vacationers—unless, perhaps, they heard about the recent discovery of the world’s largest sapphire there.

A few Fairfield County residents in-the-know, however, have sought out the exotic island nation of Sri Lanka and found much to recommend. Three local families (my own being one) who visited last summer are decidedly enamored with the place. “It’s so amazing to see how other people live. Even the fact that there are very few Americans who vacation in Sri Lanka makes you think about some of your perceptions of other cultures,” said Julie Droller of Ridgefield, who traveled with her husband and another couple from Fairfield County.

Topping the list of reasons to make the trip: Wild elephants abound in Sri Lanka. Tourists are virtually guaranteed to see several if they visit one of the country’s national parks, even if only for a few hours. In fact, many experts consider Uda Walawe National Park better for elephant viewing than rival parks in East Africa. My family’s time at Uda Walawe was no exception, though we were also lucky to experience several other elephant sightings, including two elephants cooling off in a pond with a lunch of lotus flowers at Yala National Park.

Sri Lanka’s elephant conservation efforts also include orphanages and transit homes where visitors can gain a deeper understanding of, and closer contact with, the impressive animals. Droller highly recommended Pinnawala Elephant Orphanage and described a separate, memorable elephant experience when driving through the town of Habarana: “Some elephants had just walked out of their safari camp and all the way to the side of the road. We literally could have reached out of our car window and touched them.”

While elephants are the ultimate show-stopper, they are by no means Sri Lanka’s only fascinating wildlife. Think leopards, jackals, pangolins, sloth bears, crocodiles, mongoose, barking deer, and monkeys as well as beautiful birds, butterflies and reptiles that are viewable nowhere else on Earth.

Navamali Abeywickrema, a Sri Lankan expat and former travel-industry executive who has lived in Fairfield County for more than seventeen years, returns regularly with her two sons. Abeywickrema’s family has taken many different excursions within the country, but her youngest son, a budding nature photographer, said his favorite destination was Sinharaja Forest Reserve, a UNESCO World Heritage Site due to its high percentage of endemic species and ecological diversity.

Those who venture beyond the country’s thousand miles of pristine beaches will find plenty of natural wonders to explore. Sri Lanka’s fertile coastal waters often attract more blue whales—the world’s largest—than anywhere else on the planet. Dolphins, sperm whales and sea turtles like it there, too. My own daughter, an elementary student, said her favorite Sri Lanka destination is the Victor Hasselblad Sea Turtle Research and Conservation Center in Kosgoda, followed closely by a rainforest hike and waterfall swim in Sinharaja. I, however, will never forget snorkeling with green turtles by the beach in Hikkaduwa.

Sri Lanka’s architectural and cultural heritage is captivating. Droller says one of her favorite memories is climbing Sigiriya Rock. “When you drive by, it’s this enormous rock…to actually get to the top and see the views—and imagine that there was once an entire city up there—is just breathtaking!” There are a total of six archaeological UNESCO World Heritage sites in Sri Lanka, a large number for a nation that is only about 25,000 square miles, or roughly equivalent in size to West Virginia.

Abeywickrema said that she is keenly interested in traveling to the archaeological sites on the Jaffna peninsula in the country’s far north. The area was off limits for almost thirty years during the civil war that ended in 2009 and, as such, remains a mystery to much of the world.

Sri Lanka’s natural, cultural and historic treasures are all surprisingly accessible. Thanks to recent infrastructure improvements, particularly brand-new highways, wilderness areas and tourist attractions are easier to reach than ever before, especially if you hire a local guide/driver. Our driver was part translator, part logistics expert, part cultural ambassador, and all heart. He made a huge impact on our overall experience.

Train travel, most notably in the central highlands, is beautiful. The trip from Ella to Kandy is filled with views of tea plantations, dramatic changes in climate and vegetation and misty scenes of cows grazing in verdant hilltop fields.

A former British colony, then known as Ceylon, Sri Lanka has adopted English as a primary language for tourism and commerce, making communication much simpler than in other parts of Asia. Even when language barriers or travel difficulties do arise, Sri Lankans’ welcoming and friendly dispositions will inevitably come to the rescue. “Hospitality is deeply ingrained in Sri Lankan society and is an essential part of the culture,” Abeywickrema said. “Partly it may be the influence of [local] Buddhist and Hindu practices, which promote ‘giving’ without expecting a return. It is also considered meritorious.”

July and August are considered low season in Sri Lanka, which may be a further boon for Fairfield County travelers. Top resorts have more availability, prices are at their lowest of the year, and weather is at its best for the North and East parts of the country. It is also rambutan season, when the exotic fruit is at its most flavorful and plentiful. In Hill Country towns like Ella, Kandy and Nuwara Eliya, temperatures and humidity are still mild in comparison with other regions and The Kandy Esala Perahera, a religious and cultural festival culminating in a beautiful procession of decorated elephants, dancers, and drummers on the night of the August full moon, is something to behold. This year’s festival occurs August 8 through 18.

98 Acres: Atop a beautiful and serene tea plantation, this intimate, eco-chic resort offers gorgeous mountain views, in-room dining, swimming, hiking and dozens of bird and butterfly species among the treetops of Ella. (http://www.resort98acres.com/)

The Fort Printers: Perfect for those who want understated luxury in a historic urban setting, this boutique hotel is located in the heart of Galle Fort, a UNESCO World Heritage site and a city well-known for its excellent cuisine. (http://www.thefortprinters.com/)

Sri Lanka Travel Guide by Triposo: Get to know more about the country’s history, landscape, or major points of interest–check out the website or download the Sri Lanka app as a handy reference for off-line maps, site details and especially wildlife identification. (http://www.triposo.com/loc/Sri_Lanka)

Drive Sri Lanka Day Tours: Organize airport transfers or reserve an English-speaking guide/driver who can simplify your in-country transit as well as help plan your itinerary and logistics. (http://www.drivesrilanka.com)