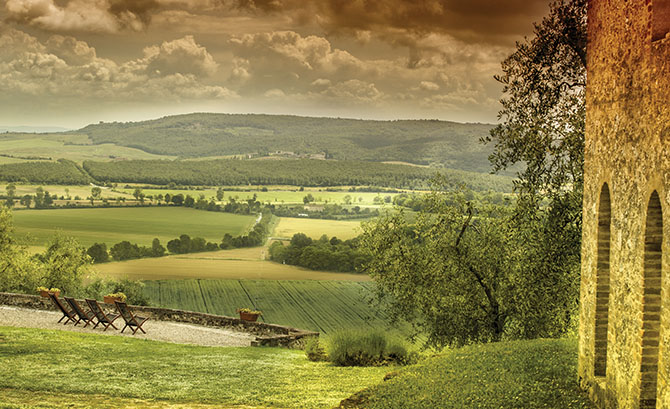 After nearly a century in the food business, Palmer’s prides itself on an original approach. So when Culinary Director Megan Palmer Rivera reported on her extended buyers’ tasting tour of Italy to her mom, Cindy Palmer Dean—who’s also the store’s creative director—an idea took shape. Why not provide Palmer’s patrons with the same kind of first-hand contact with artisanal producers, vineyard owners and local purveyors that Megan had experienced? After launching this endeavor with two trips in the past year—to Sicily and Andalusia—three more tours are on the calendar for fall. Groups are small (up to ten people) for an optimal experience. palmersdarien.com/tours.

1 GIRLFRIENDS’ GETAWAY
Sicily | Sept 18–25
Palmer’s second tour of Sicily is offered as a “ladies only” getaway, chaperoned by Darien native and Palmer family member Lettie Palmer Arnold, and guided by artisanal food exporter Gioacchino Passalacqua. In addition to the opportunity to dine on local specialties throughout the tour, there are visits to producers, treks to architectural and natural sites, and stays in two top-notch hotels, including one with a spa.

2 COAST AND COUNTRY
Puglia | Oct 2–12
The terrain that forms the stiletto-shaped heel of Italy’s boot offers a fine sampling of the fruits of sea and countryside. Puglia is famous for olive oil, artichokes, tomatoes, and beans; seafood is drawn from its coasts and local herds produce its beef and lamb. The eleven-day tour stops in ten cities and villages, with stays at three beautiful hotels. In addition to fine dining and a class in Puglian cuisine, tour participants will visit wineries, and lunch in an olive grove and at a cheesemaker’s. Beyond food and wine, visits to the studios of local artisans, shopping opportunities, and Italy’s beautiful geography are all part of the package.

3 WINE AND TRUFFLES
Piedmont | Oct 25–Nov 2
Harvest season is a great time to visit Piedmont at the foot of the Alps, home to some of Italy’s greatest wines and culinary delicacies. Participants on this nine-day tour travel through fifteen cities and towns, chaperoned by store owner Greg Palmer. Among the many stops are tastings with producers of such Piedmont delights as polenta, chocolate and grappa. Participants also get to hunt for the elusive white truffle. A cooking class is on the menu, too. If all this sounds deliciously exhausting, massages are available at a spa in the hotel in Quattordio.
TOUR GUIDE

Artisanal food exporter and native Sicilian Gioacchino Passalacqua is the ideal escort for Palmer’s tours. His business, aTTavola, keeps him in contact with purveyors and fine chefs, who provide travelers with a unique experience.