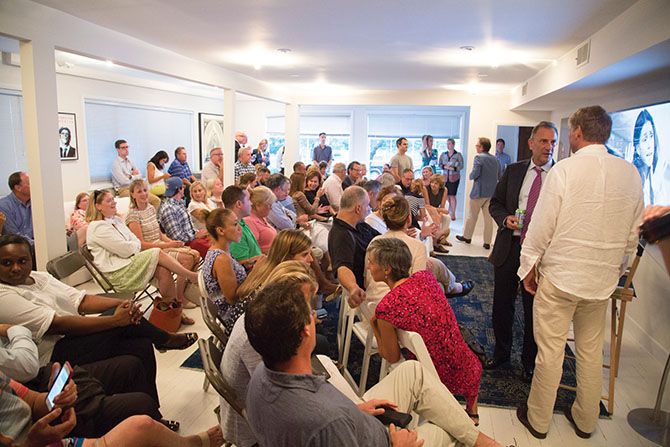 TNP was standing room only at a recent panel discussion about opioid addiction.

Above: TNP was standing room only at a recent panel discussion about opioid addiction.

For lifelong learners, digital exchanges such as online classes don’t come close to offering the same rewarding experience as watching live play readings, listening to speakers in person, or attending movie screenings with a group followed by an open and honest dialogue.

The Nantucket Project (TNP), headquartered in Greenwich, has created a venue for thinkers to interact in at its annual “ideas conference” held in September on Nantucket. This year’s event attracted attendees with a diverse group of presenters: Deepak Chopra, Norman Lear, Christy Turlington Burns, Seth Godin, Larry Gordon, Monica Lewinsky and dozens of others. The goal? “To exchange ideas, build strong relationships and share groundbreaking insights.” But for those who aren’t able to attend this intellectual summit, local programming lets you experience TNP throughout the year.

A membership at TNP’s Mason Street Library ($500 annually) includes invites to a robust lineup of events as well as exclusive access to speakers, actors and scholars. “The library is similar to how Starbucks created that third place between work and home,” says Scott Williams, TNP president. The space, which opened during the Greenwich International Film Festival last June, is a spot where members can drop in for espresso, chat with founder Tom Scott and fellow members, use the speedy Wi-Fi and read any of the “world’s best magazines,” among other resources. Members are automatically invited to all of the ongoing events and can attend TNP speaker rehearsals. Though most of the events are free to the public, members receive priority and also have the chance to network with some of the area’s most creative people.

“Our hope is that we create this fellowship, a community that is 200 strong, and that they stay with us,” says Williams. “It’s for those who have a curiosity that’s insatiable.”

Science & Health
Dr. Richard B. Lipton, a brain expert and professor at the Albert Einstein College of Medicine, will present “The Aging Brain: Use it or Lose it” on Thursday, November 3.

Politics and History
A special Election Night event is in the works. And on Tuesday, November 22, the anniversary of JFK’s assassination, author Paul Wolfe will read from his upcoming novel, The Book of Mary based on JFK’s lover and confidante Mary Pinchot Meyer.

Tech Films
Watch We Live in Public, a documentary about internet pioneer Josh Harris and the loss of privacy in the Internet age. Harris will then speak from Las Vegas via Highfive after the film on Thursday, November 17. (Other recent viewings include the documentary Screenagers, covering tweens and teens who are addicted to screen time.)

Fatherhood
A new parenting group for dads only will meet every other Tuesday to discuss topics such as raising resilient kids and regulating our emotions as parents.