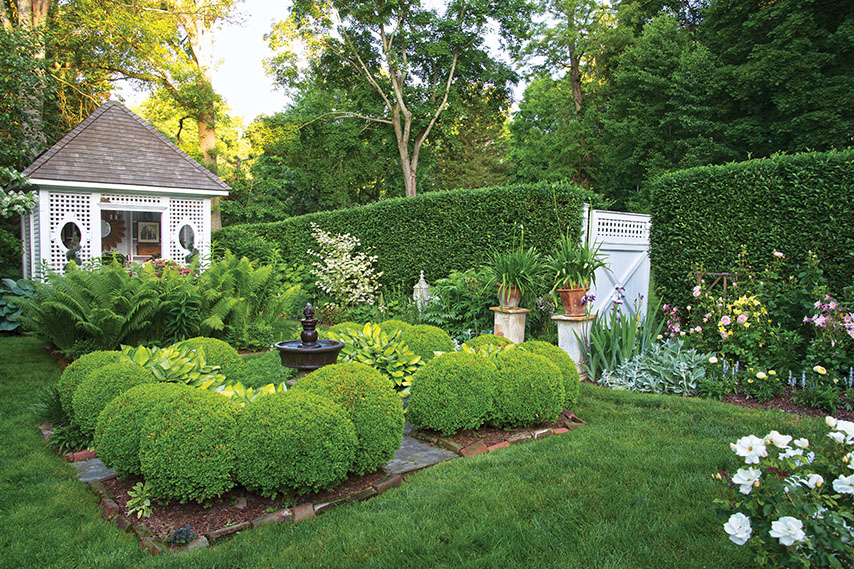 Photography by Amy Vischio
Above: The Lattice House anchors the elaborate and lush garden designed by Southporter Christopher Philip

Fifty years ago, Mrs. Arlene Philip looked at the garden around her 1916 home. In the unruly forsythia, wild raspberries and trees of all ages, she imagined something far different: a space befitting historic Southport—nearly three-square miles of harbor views, picket fences, hydrangeas, and Italianate, Stick and Queen Anne homes. These homes were erected during Southport’s maritime heyday in the nineteenth century and imbued with a feeling of the Old South (indeed, a NYT article reported that at that time the village traded with Savannah and Charleston, where many families had relatives).

Mrs. Philip transformed the thicket into a garden with a pleasing sense of balance, color, shape and fragrance—and nurtured it for three decades. When she sold the property to her son, she left it in excellent hands. Christopher Philip, an ad agency executive, has a passion for the artistry of formal gardens, and his partner, Parker Rogers, is an interior designer with his own firm in Southport. While Rogers mixes antiques and family heirlooms inside the home, Philip has a professional’s eye for the landscape. He retained his mother’s work, then expanded it with expertly defined garden rooms. He also added The Lattice House, a feature that suited both men’s talents and interests.

The Lattice House, at the end of a lush garden path, is more than a traditional folly, a garden outbuilding. Eighteenth-century folly designs were extravagant or striking in a unique way—and made no promise to be practical. In fact, the point was for design to outshine practicality.

Philip’s is more. “I designed Lattice House after years of studying garden structures and seeing the different ways they could be used,” he says. “I wanted to make it functional as well as beautiful.” The result is a structure that serves as a destination while strolling the gardens as well as a place to host intimate dinner parties up to eight or to relax on weekend mornings.

“I sat down one day with graph paper and drew out all the elevations. I handed the drawings to the carpenter who had just finished building the library in our home and asked him if he can build this exactly as drawn,” he says. The project was flawless. “Lattice House is built like a fine piece of cabinetry—the finish work is amazing considering it sits outside in a garden!”

Rogers stepped in to design the interior with antique wicker and refurbished bamboo chairs, sailing prints, sturdy fabrics in classic patterns and more.

“The interior of Lattice House reflects our whole view on design—color and comfort—mixing new and old family pieces and found items with an eye on quality,” Philip says.

Philip collects garden ornaments from the early 1900s, in keeping with his house. He found a large urn at Pickets (now closed), cherubs at the New York Botanical Garden’s Garden Sale, and topiaries at Trade Secrets. His passion for garden design and collecting has blossomed into a retail business, also called Lattice House. “We will be a home accessories store and one of our focuses will be garden,” he says. “We did a pop-up marketplace in the space over the holiday season and now we are in the process of renovating and designing it.” The store will be located at 411 Pequot Avenue in Southport Center.