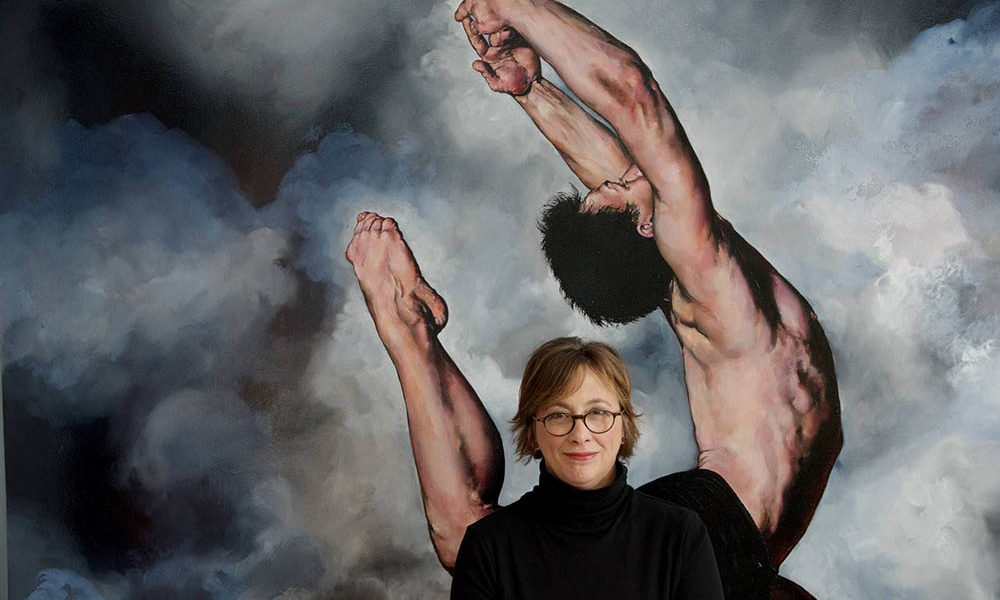 Artist Sherri Wolfgang is astonishing, as will be affirmed at her upcoming solo show at the Housatonic Museum of Art in Bridgeport. Her two-part series exhibit, “Nick.E.LO.DE.ON” and “Twisted,” opens on June 15 and runs through July 31.

Sherri’s sprawling rustic Westport home with its attached studio, offers the perfect setting for her to indulge her artistic fancies. Entering her eclectic world unleashes the imagination, as the walls bulge with pieces from her past and present, merging narratives that combine a series of techniques from the abstract to the more realistic, as portrayed in her classically trained figurative art.

“Nick.E.LO.DE.ON” celebrates the human form using model, professional dancer, and 2012 Staples High School graduate, Nick Daley, as her muse. “Twisted,” part two of the series, depicts women’s personal struggles with self-image, with Sherri using herself as a model. Here, she delves into the preoccupation and repercussions of the plastic surgery phenomenon.

Sherri is one of Westport’s artistic treasures, who bought her first sketchbook at the iconic Max’s Art Supplies at age twelve. After living in New York, where she formed her studio “Dynamic Duo,” she moved back to Westport in 1992. She later brought that studio to Westport, where she turned it into an art school for children and adults before segueing into her own full-time career as a painter.

A graduate of Carnegie Mellon, Sherri’s prolific résumé resembles a colorful palette, and runs the gamut from cover drawings for Time, Business Week, Barron’s, and Sports Illustrated, The Village Voice, among numerous others.  She further assisted with ad campaigns for Coco-Cola, Burger King, IBM, and MTV .

While the afternoon sun fell over Westport, Sherri and I sat in her large country kitchen sipping tea and nibbling on freshly baked cranberry bread. She regaled me with stories of her creative journey.

“I spent my early years in rigorous training, drawing the figure, and learning the science of anatomy,” she reflects. “Drawings and paintings of the nude, called ‘academies,’ were the basic building blocks of academic art. The procedure for learning to make them was clearly defined: becoming familiar with the principles of contour, light and shade, and then layering them with oils and resins.”

Come and share a piece of that journey, and revel in Sherri Wolfgang’s life-size paintings, which incorporate Renaissance traditions in combination with Old Masters techniques.

The artist sums it up: “The blueprint of my paintings has always been a strong aesthetic in drawing.” Viewing her work will be an equally aesthetic experience, not to be missed.