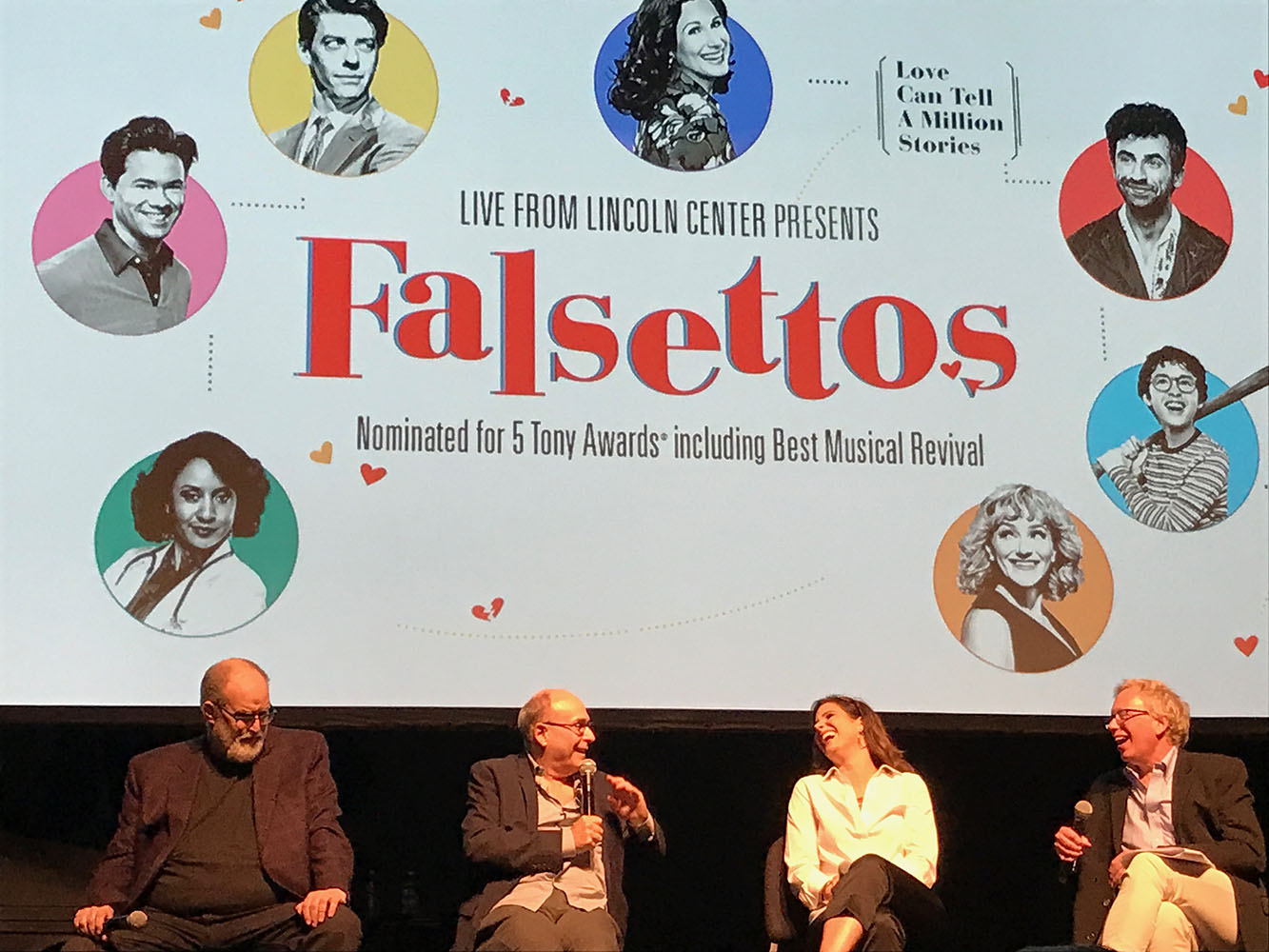 Broadway is a mere train ride away from Westport, but these days the Great White Way and the Post Road keep intersecting. Just two days after Jonathan Groff (Hamilton, Spring Awakening, Glee) entertained a full house at the Westport Country Playhouse’s annual gala, three Broadway greats—William Finn, James Lapine and Stephanie J. Block—made the trip to our artsy town as panelists for the Westport Library’s 14th annual Malloy Lecture in the Arts.

The sold-out “Falsettos: In Conversation” event, held at the Playhouse, was conceived and moderated by “Live from Lincoln Center” Executive Producer Andrew Wilk. The five-time Emmy Award winner, a longtime Westport resident, produced the film version of the Broadway hit, which debuted in July to rave reviews.

Last Monday, Wilk interspersed clips from the movie with an exploration of the history of the show with Lapine, the playwright and director who won Best Book Tony Awards for Into the Woods and Passion, and renowned composer and lyricist William Finn. Conceived by Finn and Lapine at the dawn of the AIDS epidemic, Falsettos explores modern middle-class family dynamics, including a husband who leaves his wife for a man. The show received Tony Awards for Best Original Score and Best Book in 1992.

Stephanie J. Block, who was nominated as Best Actress in a Featured Role in a Musical this year for her portrayal of Trina in the Falsettos revival, added a welcome smile and eloquent input, while Finn zinged funny one-liners into Lapine’s ruminations on the origins of the show and its songs. It’s no wonder Falsettos, which was nominated for Best Revival of a Musical, is hysterically funny despite heavy themes.

Block’s “I’m Breaking Down,” sung while baking a banana-carrot surprise, is a show-stopper, complete with phallic banana and butcher knife props and a banana-mouthful finale you gotta see. This song occurs early in the show and illustrates why Finn is brilliant; he explains that someone told him it’s because: “You put the 11 o’clock number at 8:30!”

Block topped off the evening by treating the audience to a set from one of the finest voices on Broadway. From “Somewhere Over the Rainbow,” a song that inspired her as a child, to “Defying Gravity,” from her days as Elphaba in Wicked on Broadway, Block sang her heart out. Though anxious to get home and prepare for her toddler’s first day of preschool the following morning, Block graciously spent time with fans after the show.

Wilk comments, “It was so gratifying to share ‘Falsettos: In Conversation’ with such an enthusiastic full house at the Westport Country Playhouse, including a strong turnout of Staples Players. Falsettos is a seminal moment in musical theater history, and it is especially important to our community because Staples Players produced the very first high school production of this piece in 1993.” The Playhouse agreed to loan the students their stage, when the principal at the time decided the controversial show could not be done on the high school’s stage.

For anyone who hasn’t seen Falsettos and everyone who has and loves it, tune in to PBS on October 27th at 9 pm to watch the film version. “To have captured this Lincoln Center Theater revival, with its five Tony Award nominations, was a true career highlight for me,” says Wilk.

One fan who traveled from California to enjoy “Falsettos: In Conversation” will surely be watching. In a letter President Bill Harmer read at the Westport Library Transformation Project groundbreaking, she writes: “I’m a huge Falsettos revival fan—I went to see it in cinemas six times despite having to walk an hour to get there—and when this event was announced, I scraped together every last cent I could squeeze out of my teaching assistant’s salary and booked a flight from California to Connecticut.”

She goes on for several paragraphs, raving about the event and how the insights she shared on social media touched her peers: “It’s because of community events like this that young people like us feel welcomed into an art form that can sometimes feel so remote and exclusive. We’re a teeny-tiny band, and we can’t thank you enough. I really hope to attend more Westport Library events in the future, perhaps when I’m forty years old and the second Falsettos revival is happening, but hopefully sooner! I will be a fan and supporter for life. This is an experience that will live in me forever.”

She concludes: “What more can I say?” Exactly.