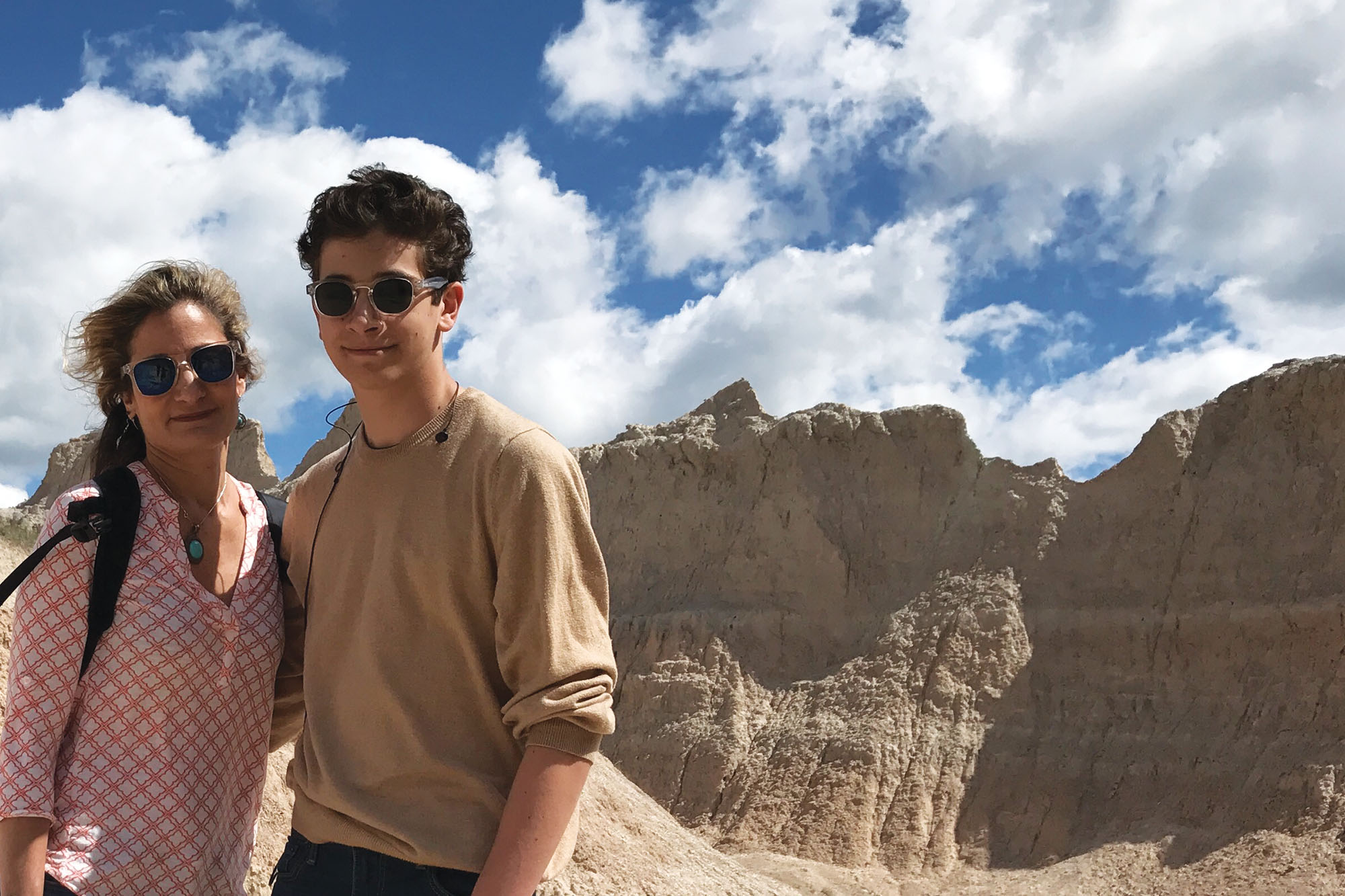 Above: Fairfielders Christy Ottaviano and her son, Francis Ohe, on an adventure in Badlands National Park, South Dakota

When my older son Francis was a toddler, he never napped on weekends. Never. Not ever. Never. When all of his little friends were taking naps and their parents were getting a few hours of “mad” time to catch up on work or simply take a shower, I had to find my own downtime with a restless two year old. So, we hit the trails. We explored local nature centers and open spaces and eventually state parks up and down the coast. Now, as a teen, Francis is eager to have new outdoor adventures together, which makes me a very lucky mom.

Last summer at the dawn of my twenty-fifth year working for the same company, I took a six-week sabbatical. I thought long and hard about how to spend this time away from the office—guitar lessons, painting classes, more visits with my parents and family trips. When I was in high school, my father arranged bike excursions just for the two of us; we rode along Chesapeake Bay, through Pennsylvania Amish country, and on Martha’s Vineyard; I wanted to create that same kind of quality time with my family. I decided on one-on-one trips with each of my kids, including a trip just with my husband, Kevin—something we hadn’t done in the sixteen years since Francis was born.

While my younger children were eager to visit large cities to take in theater and sporting events, Francis proposed a trip to Yosemite National Park where we could hike in the Yosemite Valley surrounded by the stunning monoliths Half Dome and El Capitan. The trip with my son who never slept in favor of a hike cemented our shared love of the outdoors.

After returning from Yosemite, Francis asked if we could plan another trip. What mother can resist her teenage son asking for more quality time together? I got right to planning and settled on a trip to Badlands National Park.

Over Memorial Day weekend, Francis and I, packed with the de rigueur hiking accessories, flew to Rapid City, South Dakota, with its charming antique stores, vintage vinyl shops and hipster restaurants. We soon headed for the verdant Black Hills, where we took day excursions to Devil’s Tower in Wyoming—the country’s first national monument, designated by Teddy Roosevelt, who played a crucial role in the development of the country’s national parks. The highlight was experiencing the grand scale beauty of the Badland’s ancient geology. The buttes, with sandy-orange tones that caught the sun at different angles, sometimes resembled the pyramids of Egypt. Other times, especially in parts of the canyon away from the grasslands, it felt as if we were walking on the moon.

By far our most exciting (and terrifying) adventure came when we were hiking the Cliff Shelf Trail. This plank trail eventually gave way to a path through grasslands. We hadn’t passed anyone for a long while, and were walking single file while chatting when we bended a corner and came face to face with a very large, very agitated rattlesnake, coiled and hissing. His rattle was shaking unrelentingly and, at that critical moment, a swirl of images from Rudyard Kipling’s Rikki Tikki Tavi to Animal Planet and Crocodile Dundee filled my head. I told Francis to back up slowly and watched the snake for any sudden lunges toward us. The backing up part seemed endless. Once around the bend, we exhaled and had mild heart attacks, each. Of course, we had seen the warning posts for rattlesnakes—we just didn’t think we’d find one situated in the middle of the path. This was a wake-up call that the wilderness is unpredictable and can quickly turn dangerous. We soon coined this trail “The Trail We Loved Best Except for the Part Where We Almost Got Bitten by a Rattlesnake.”

To parents looking to spend time with their teens, I say: Plan it now. And remember what Thoreau said: “It’s not what you look at that matters, it’s what you see.”

Devil’s Tower, a laccolithic butte, was named Bear’s Lodge by the Native Americans.

We took side trips to the Crazy Horse Memorial as well as Mount Rushmore. Did you know sculptor Gutzon Borglum repositioned Jefferson from the left side to the right side of Washington?