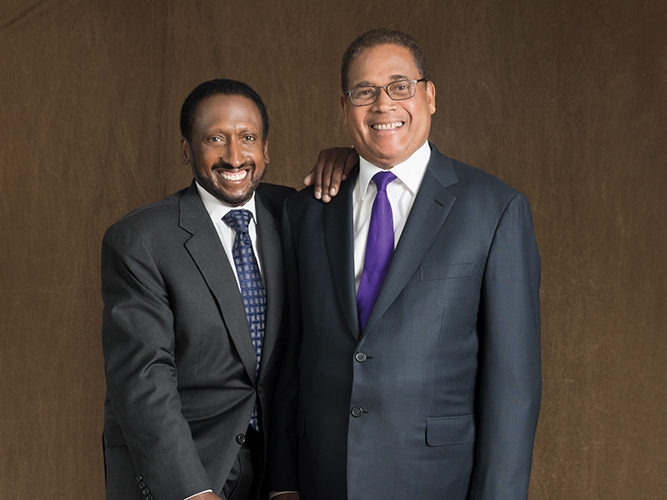 Inspiration
“It started with my parents,” says Andrew, when asked what inspires the Whittinghams to give back. “My father made a donation to Norwalk Hospital to start the cancer center. At the time, he shared the story of his mother dying of cancer when he was young. After watching her suffer, he made a vow that if he ever had the means to help people with cancer he would. Michael and I continue that.”

Michael, former associate dean of admissions at Amherst College, adds, “I’ve been involved in education for over twenty-five years and promoting access to higher education and other opportunities to disadvantaged students. Through the Whittingham Foundation, I’ve been able to continue that work. There is nothing more fulfilling than seeing the results of giving someone an opportunity they would not have had otherwise.”

Michael Daglio, president of Norwalk Hospital, comments: “This year marks the Whittingham family’s twenty-year anniversary of philanthropy to advance the health care mission of Norwalk Hospital. Andrew and Michael’s remarkable generosity promises to touch the lives of thousands of men, women and children in our community for generations.”

Beyond a dedication to health, the brothers also are passionate about community. The Andrew and Michael Whittingham Family Discovery Center is a stunning contribution to Stamford’s Mill River Park. “We saw its location in the middle of the city as a means of bringing the community together,” says Andrew.

The list continues, with the name Whittingham a prominent one at Stamford Hospital as well (The Whittingham Pavilion). “I asked my dad why we put our name on buildings,” says Michael. “He told me, ‘It’s to inspire other people with similar or more means to do the same.’”

Hopes & Dreams
“We’d love to devote resources to so many areas,” says Michael. “Finding a cure to cancer is still a battle, but we are in it with the hope to win it. For now, we can at least make sure those who are afflicted are well taken care of.” He adds, “I also want to continue supporting educational programs that help people reach higher and further.”

Andrew says, “At the end of the day, you’ll be on this earth for a reason if you’ve made a difference in others’ lives. People come up to me and remember my parents that way. It’s a nice legacy.”