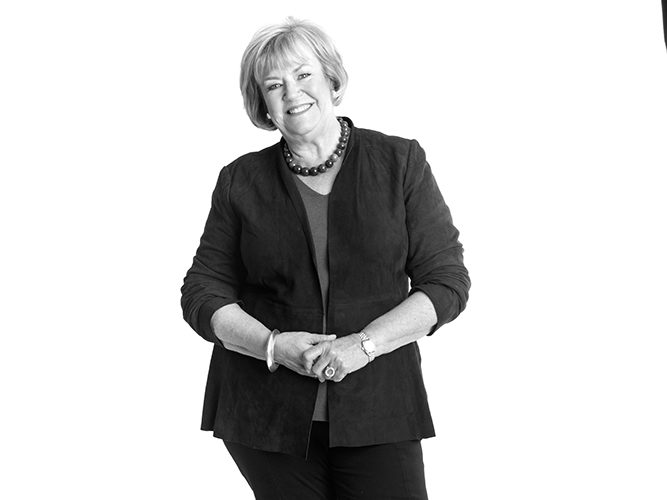 Inspiration
“I was raised in a family where community service was valued,” says Karen Royce. “I saw both my parents do it. When I came to Greenwich and had retired from my career, I wanted to put my skills to work. It was a natural non-paying career to have.” Karen says she is drawn to human services and is motivated by her interactions with the professionals and volunteers at the many organizations with which she is involved. “I love the arts and I’m passionate about the environment,” she says, “but I get the most satisfaction from doing things that improve people’s lives.”

Eileen Bartels, who met Karen twenty years ago at the Junior League of Greenwich, comments, “Her hands are quietly guiding so many things in Greenwich. Karen has made making a difference in the lives of those here and all over the world a core priority and value in her life.”

Courage into Action
“I’m not bashful about speaking up if I see a change that is needed,” says Karen. She noticed that the Garden Education Center had an inadequate greenhouse and teaching facility, “so we did something about it. I had a career on Wall Street as a stock broker, so I’m not afraid of asking people for money.” Karen credits her early experiences volunteering at the YWCA and Putnam Indian Field School (where her daughter attended) for giving her good training in a volunteer career that has spanned thirty-one years.

As cochair of Outreach at Christ Church of Greenwich, Karen is one of the founders of Enduputo Primary School in Tanzania. The Maasai children who attend would not have access to education without it. Karen was also instrumental in extending affordable day care and early education through Children’s Day School in Greenwich. Fifteen years later, she remains on its advisory board. In 2012, Karen received an honorary doctorate from Berkeley Divinity School at Yale.

Hopes & Dreams
“I’d love to live in a bipartisan town and world, where it’s about the best person being elected to a position, and we had a federal government that worked together regardless of party,” she says. As the head of the capital campaign for the project, Karen hopes that “Neighbor to Neighbor will be in its new building in the not too distant future.” Finally, she has watched the children progress through the school in Tanzania and “dreams that some of the students now in secondary school there seek higher education.”