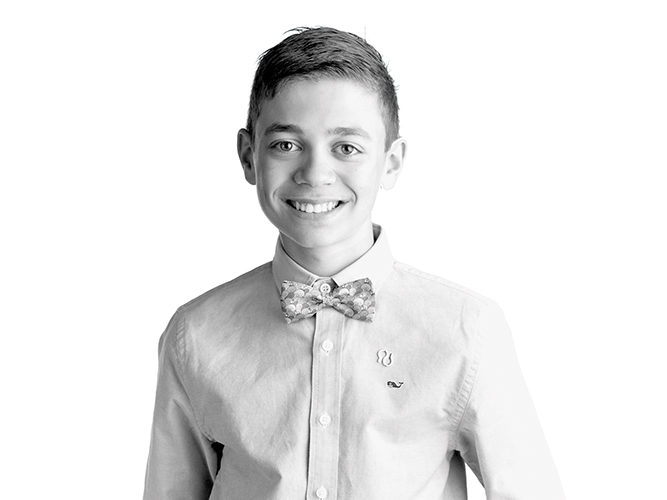 Inspiration
“My grandmother was diagnosed with Alzheimer’s when I was nine,” explains fourteen-year-old Max Rosenberg. “I’m really close to her. I’ve spent a lot of time learning how to cope and how to deal with people with the disease.“

Max’s mom, Jennifer, says, “Max was actually my educator. He was the leader in getting through to her and our family members.” Max was only getting started. When he saw a poster for the Walk to End Alzheimer’s, he was determined to get involved.

Courage into Action
In 2014, his first year participating in the walk, Max raised $2,500. The next year he raised $5,000 and was asked to speak in front of the 2,000 attendees. His eloquence and passion did not go unnoticed. Last year Max was named the Alzheimer’s Association Junior Ambassador to Senator Richard Blumenthal.

“Max quickly became a staple by the senator’s side at events, town halls and rallies,” says Jennifer Walker, vice president of communications for the Alzheimer’s Association’s Connecticut Chapter.

“Senator Blumenthal often says he’s glad Max isn’t old enough to run against him or he might take his job!” State Senator Tony Hwang is also a fan and invited Max to the floor of the Senate, where Max swiftly began collecting donations from senators in the room. Both Blumenthal and Hwang attended this year’s Celebrating Hope, the Alzheimer’s Association’s Greenwich benefit, at Max’s invitation.

When Max attended the Alzheimer’s Advocacy Forum in D.C. last March, Walker says that “he quickly became the most popular person at the forum.” Even Maria Shriver began following him on Twitter. “In two years Max has raised almost $20,000 for the Alzheimer’s Association,” she continues,“and was part of an advocacy team that helped move forward $750 million in NIH funding for Alzheimer’s research.”

“I’m a big politics fan,” says Max. “I went to D.C. again in July and I got to meet with all the senators and representatives from Connecticut and other states.

I got to speak about the agenda of the Alzheimer’s Association, as well as discuss their politics and my point of view.” His schedule is not that of your average teen: “I put in time every day pretty much, looking over new facts, emailing senators, fielding emails from people on my walk team, and spending time with my grandmother.”

Hopes & Dreams
“Obviously to see a world without Alzheimer’s is my biggest hope,” says Max. “More public awareness is key. Not a lot of people know it’s the sixth leading cause of death in America. One person develops it every 66 seconds, and it cost the U.S. $200 billion just this year.” Max, a student at Loomis Chaffee, aspires to be a politician one day. “Maybe even President. My work for Alzheimer’s will end once there is a cure, hopefully. My love for helping others, giving back to the community, and making an impact won’t ever end.”