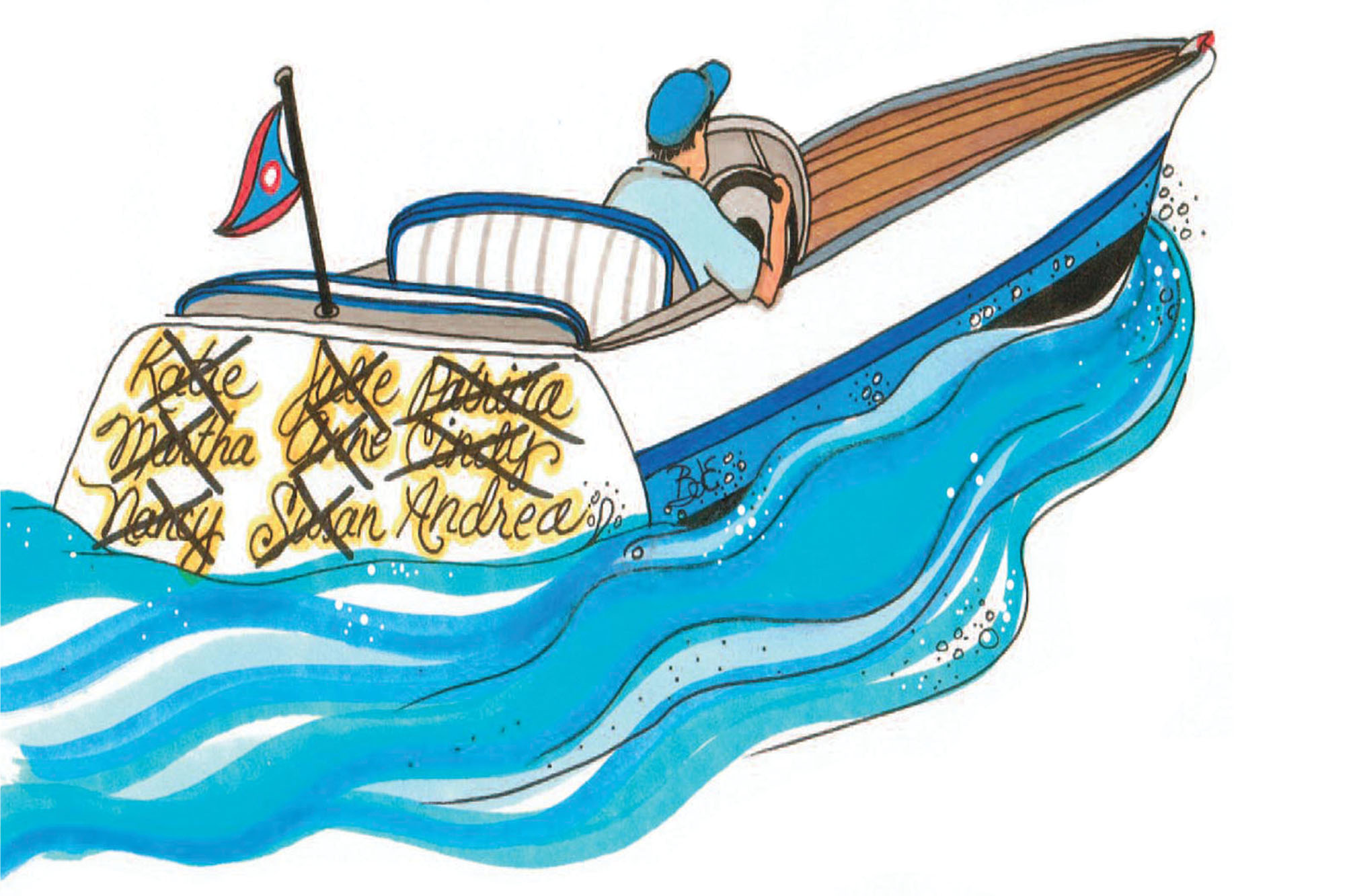 Photographs by Bob Capazzo
Above: One of Jane and Bobbi’s favorite cartoons

Seventeen years ago a mutual friend brought Bobbi Eggers to see comedienne Jane Condon do her stand-up routine at a Greenwich fundraiser. After the laughter had died down, introductions were made and it quickly became apparent the two busy moms had lots in common. “Within about one minute, we were talking about collaborating,” says Bobbi, an illustrator who at the time was a Madison Avenue creative director.

Soon, the duo began to pair Bobbi’s witty art with Jane’s spot-on comedic zingers to create cartoons for a long-running series in the Greenwich Post and other publications. They zeroed in on the often ironic trappings of suburban mom culture including husbands (and ex-ones), a fondness for wine and the reasons moms secretly love invites to back-to-school parent teas. “Because you get to check out other people’s houses,” says Jane.

Recently, the two published Chardonnay Moms, a “greatest hits” collection of their most popular and favorite cartoons.

Over Diet Cokes in Jane’s backcountry kitchen (because it was before noon), the funny ladies shared some behind-the-drawings dish. “Naturally, there was a fair amount of wine involved,” quips Jane, who actually prefers red. “But we went with Chardonnay because it just sounds better.”

GABBING WITH THE GALS

1. ON CHOOSING FAVORITES
Some of their picks, like the one featuring a “Back to School” sale at the Porsche dealership, were no-brainers. “It’s not true that every kid in Greenwich gets a Porsche, but it can seem that way,” says Jane. Another classic pokes fun at the practice of affixing stick-figure families to the back of luxury SUVs. “We wondered what happens if the parents get divorced,” explains Bobbi. So, she sketched a cartoon that simply crossed out the dad stick figure. Then, there’s the one of three soccer moms, with one whispering to another, “Your kid just scored a goal, pretend you saw it.”

2. ON THEIR CREATIVE PROCESS
Bobbi, a mom of five adult children, used to draw by hand but has transitioned to iPad drawing, saying technology gives her illustrations a more sophisticated look. The technology also allows her to slip pieces of photos into her cartoons to make them more lifelike. As for pairing images with captions, she and Jane often brainstorm while socializing. “Our best work tends to happen just sitting here, like we are now at the kitchen table, talking about life,” says Jane, the mother of two adult sons. “We’re like an old married couple, except we’re married to other people.”

3. ON THEIR INSPIRATION
We won’t name names, but the collaborators told us some Chardonnay Moms characters are based on friends and family. A longer-haired, red-headed Jane (“from when I had long red hair”) was also the muse for a few of Bobbi’s drawings. “But we don’t tell people, ‘Oh, that’s so-and-so’ because we don’t want anyone to feel bad or sit around wondering if we’re picking on them,” says Jane.

4. ON BEING NICE
While their cartoons do take some amusing jabs at affluent suburban culture, the cartoonists say they are careful not to mock anyone’s choices or lifestyle. For example, a cartoon of a snowwoman sporting surgically enhanced breasts is laugh-out-loud funny, but they would never devote a series to mocking plastic surgery. “What’s important is that people can relate to what we’re saying,” says Bobbi. “The idea is that we’re in this together—and we all get it. We’re not lampooning anyone as much as we’re commenting on a shared experience we can all laugh about sometimes.”

Sage advice from the ladies

Chardonnay Moms is a perfect Valentine’s gift for that mom with a sense of humor. It can be purchased locally at Diane’s Books, via Amazon or through ChardonnayMoms.com for $15.99.