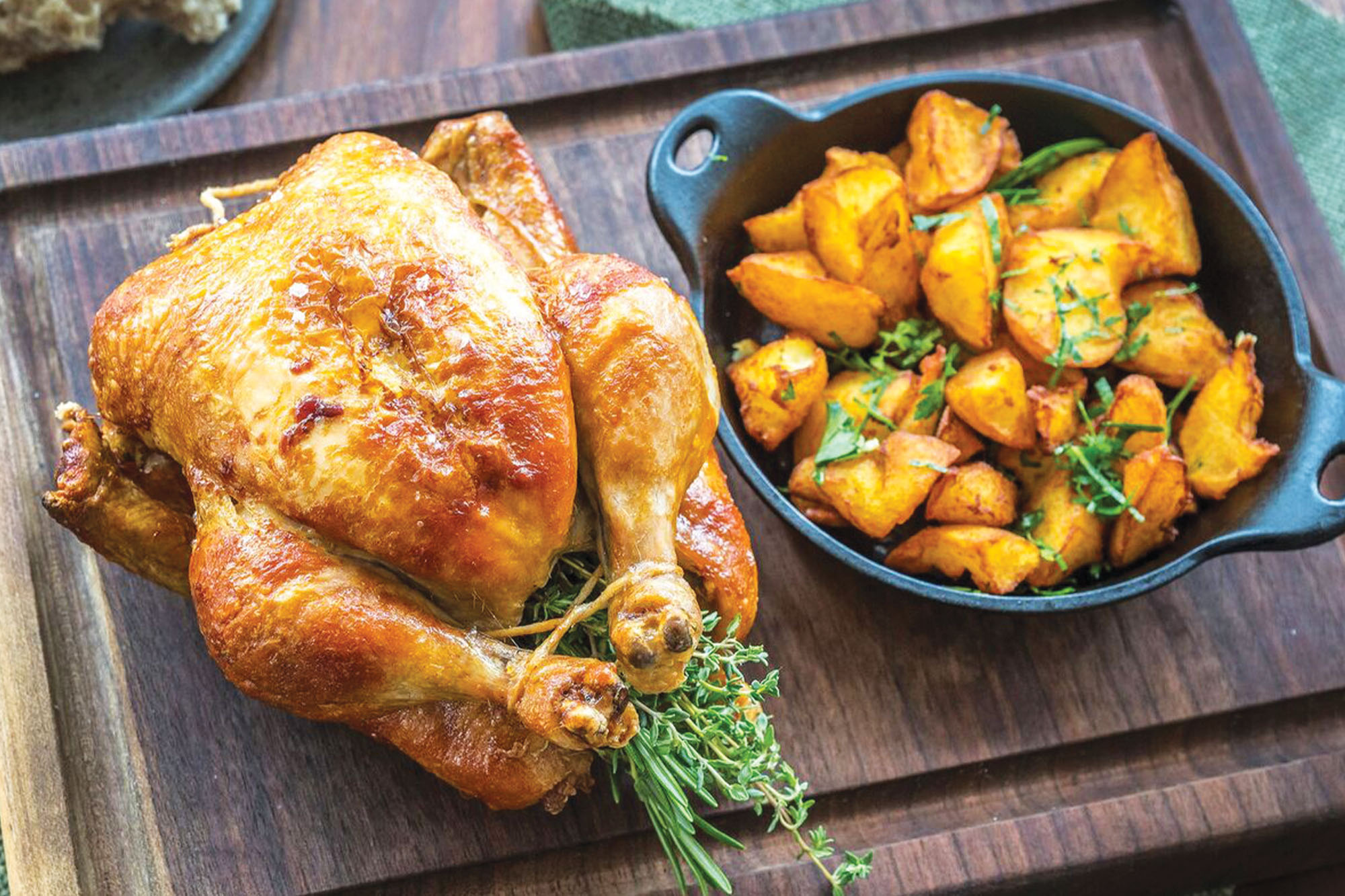 Photographs by Noah Fecks
Above: Roast chicken with new potatoes

A few weeks before we hoped to have dinner on a Friday at the wildly popular Tavern at GrayBarns in Silvermine, we logged onto the reservation portal. Just two choices: 5:15 p.m. and 9:30 p.m. What was all the fuss about?

On a cold and dark afternoon, we settled in at a cozy table for two by the roaring fireplace. It hardly seemed possible this was once the Silvermine Tavern, which closed in 2009.

New owners Andy and Marsha Glazer have transformed not only the tavern, but also the adjacent inn and surrounding property. The color scheme and design, a warm and welcoming cream and wood, with whitewashed floors and handmade lighting fixtures along with original beams and accents, is beautiful, curated, tasteful and comfortable.

A small shaft of bread appeared, as well as grass-green crystals atop a dollop of butter. Our server Kristen told us that Steve the bartender moonlights as a forager. Later, Executive Chef Ben Freemole said he’d brought home about twenty-five pounds of ramps from Steve, pickled the whites, and put the greens in his dehydrator for three days, knowing he could “do something interesting” with the ramp powder.

Chef Freemole said the Glazers wanted the food to match the environment. “They were looking for a modern take on a tavern, an unstuffy place where you can let your hair down. They wanted it to be seasonally and locally inspired. That leaves us a lot of room for interpretation.”

With one taste of the ramp salt and butter— perfectly crunchy-creamy, with a faint garlic essence—we understood.

We ordered roasted oysters, which came sizzling on hot rocks. Roasted uni butter, made from sea urchin, formed a golden crust on top. Its rich and caramelized lusciousness overpowered the oysters, which sadly got lost in the mix.

We’d asked to split the pear, fennel and crab soup, and the kitchen sent out two bowls without comment or added cost. The layers revealed themselves with each spoonful: a little sweet crunch from the Seckel pears playing perfectly off of shaved green onion; celery root and butter for depth; a generous scoop of fresh, sweet and bright Jonah crab. When I finally opened my eyes and looked at my companion, we spoke without words: We wanted another bowl apiece.

Our next small plate arrived. Care had been taken to cut delicata squash and green apples in wafer thin half-moons, and pomegranate seeds, pistachios and a few perfectly positioned green lavage leaves created a stunning canvas. The squash had been pickled, bruleed and roasted, but we couldn’t single out one preparation from the next without trying too hard, due to the pool of straciatella at the dish’s base. Fun and fussy were competing on the plate, ending in a draw.

The menu changes every few weeks, which keeps things interesting but limited. We ordered a cheeseburger ($20), fettucine with crab ($29) and smoked cauliflower ($22).

The homemade fettucine felt a tad too al dente. The dense pasta overwhelmed the delicious and delicate lemony buttery sauce. The smoked cauliflower was cut like a steak and beautiful to behold in its Sicilian-inspired sauce. But my companion reached for the salt when it came to the cauliflower itself, and I wished for something absorbent to swirl in that delicious sauce of basil and mint leaves, curls of red pepper, pickled onions, pine nuts, golden raisins and more.

Our burger, served with a pickled green tomato, orange American cheese and an aioli-based béarnaise, was perfectly medium rare. We took a juicy bite into the toasted bun. Pickled, cheesy, salty, creamy layers introduced the main meaty event. Why was this burger so perfect? An unctuousness lingered in the best way with each swallow. Later, Freemole told us he’d asked the butcher to grind bone marrow into the mix of chuck, brisket and short rib.

By now, more than two hours had passed, and the joint was jumping. We had to strain to hear Kristen when she asked if we wanted dessert. We thought about it. In the end we decided to move along. We knew how hard it was to get a table.

2. The menu is seasonally and locally inspired. The selections change every few weeks.

3. New owners Andy and Marsha Glazer have transformed The Tavern, which used to be the Silvermine Tavern, the inn and the surrounding property.