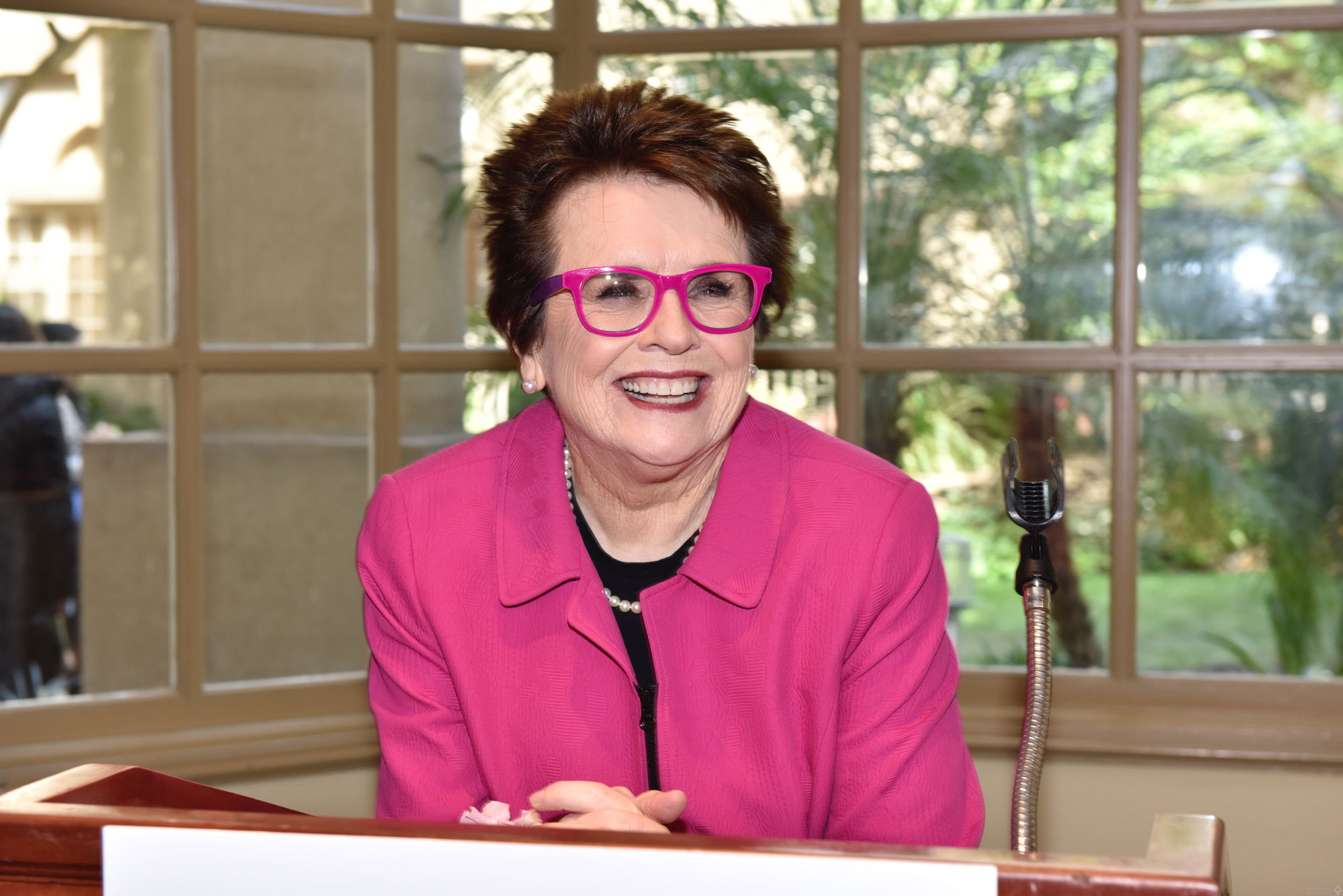 As the former Number One World Pro Tennis Player who also has thirty-nine Grand Slams under her belt, Billie Jean King knows how to battle for what she wants. She learned at a young age, for example, that women and men aren’t necessarily treated equal. “Even as a young white girl, I knew by the time I was ten that I was not going to get the attention or applause that a bunch of boys would,” she says. That feeling fueled a passion that continues to this day.

One of her most well-known moments and a pivotal time in sports history was the famous “Battle of the Sexes” match of 1973, where she defeated Bobby Riggs after he claimed he could beat any female player. King is also responsible for the birth of the Women’s Tennis Association. The WTA grew out of the Virginia Slims Circuit that consisted of nine women, including King, who broke from the USLTA (United States Lawn and Tennis Association) and created their own tour due to inequity of pay between men and women. Even still, King continues to champion gender equality on and off the court.

Moffly Media caught up with her and got to hear some of her life philosophies at the twenty–year celebration for the Fairfield County Community Foundation’s Fund for Women & Girls (FCCFoundation.org). Here’s what the tennis legend had to say.

You’re known for the phrase and title of your first book Pressure Is a Privilege, yet you weren’t born into a privileged life. How’d you get involved with tennis? “As I look back over life, I realize that those who have inner and outer success usually have great relationships, they know how to learn and keep learning, and they often thrive on solving problems. In fifth grade, a friend asked me to play tennis at her country club, so I did and I loved it. I found out they were offering free tennis lessons every Tuesday, so I asked my dad if he’d buy me a racquet. He said, “No, but if you really want to play, you’ll figure it out.” I did odd jobs for the neighbors and eventually bought my first racquet. At the end of the first day, when I finally got to play tennis, I knew what I wanted to do with my life.”

When you started to win titles in the 1960s, what was it like for female players? “It was the same for men and women, and we all played at the same tournaments, which helped us with equality. What changed everything for women’s tennis was when we signed the Virginia Slims contract for $1 in 1970 with promotor Gladys Heldman. I had a vision for what I wanted my sport to be. You have to dream it, then build it…and you’re not going to be popular sometimes. For the nine of us, it was a rough time. We were scared going into the unknown, but we decided to do it for future generations. Our goal was, and is, that any girl born in the world will have a place to compete, that women will be appreciated for their accomplishments, and that women will be able to play their passion and make a living. I really think it’s really important to figure out what gifts we have been given. Always try to find the best thing about a child and tell them that. The more you give, the more you get in life.”

You’ve done so much to champion the cause of women and girls. What’s your next endeavor? “No, I cause people. When women do something, everyone always put us in a box that we just do it for women. That really irritates me because that keeps our marketplace half as large as the guys. When a guy does something, you don’t say, ‘Thanks what you did for men.’ You say, ‘Thank you for what you did.’ So, I would like people to start thinking differently. During my career, I fought for pro tennis first, and the men did well because of that. I’ve also done Team Tennis for forty-three seasons, and it’s men and women equally on a team. Everything in my life has been together except The Women’s Sports Foundation, and that was to protect Title IX for the women back in 1974, so I had a very specific reason for starting that. It’s really important for us to broaden our vision that each person is an influencer, and a leader for their own lives and others, but I would not limit us to only half the population when we do something. When I think about the Fund for Women & Girls, I think that how you touch another person’s life is so important—but these women are going to lead people, not just women or just men.”

Do you think we are at a turning point in gender parity? “We are at a turning point, because the laws are starting to happen, and, as usual, the young people are changing things. In my generation, students helped stop Vietnam, and we also changed the vote from age twenty-one to eighteen. These days, the kids are leading the way, and it’s our job to help and support them. You’re always standing on the shoulders of the generation that came before you. Everyone should know that.”

What was the most significant result of your match with Bobby Riggs? “The two most powerful moments are what we got out of it. Women have come up to me and said it empowered them and gave them self-confidence. That match taught girls and women that they can ask for what they want and need. Even now, men will say to me with tears in their eyes, ‘I saw that match when I was young, and it changed my life because now I have a daughter.’ It’s important that we appreciate people of all genders for how they self-identify, and that we validate others. Listening to people’s stories on how its affected them has meant a lot to me.”

What advice would you give a young girl today? “I’d tell her she can be anything she wants. When a girl’s an athlete, for example, she has a better chance of graduating, can defend herself, and is a leader. You learn to be resilient, winning or losing, and losing isn’t failure. Sometimes I ask young people why they won a match. Many times, they can’t answer that question. You should practice what you’re best at every day, focus on what you do well, and then make your weaknesses adequate. Also, girls are taught to be perfect and boys to be brave, and both are wrong. Men don’t always have to be brave or fix everything. As girls, we never think we’re good enough, and we have to stop this—we’re great the way we are. Women tend to get less, so when you help a young girl or woman, you change the world in so many ways.