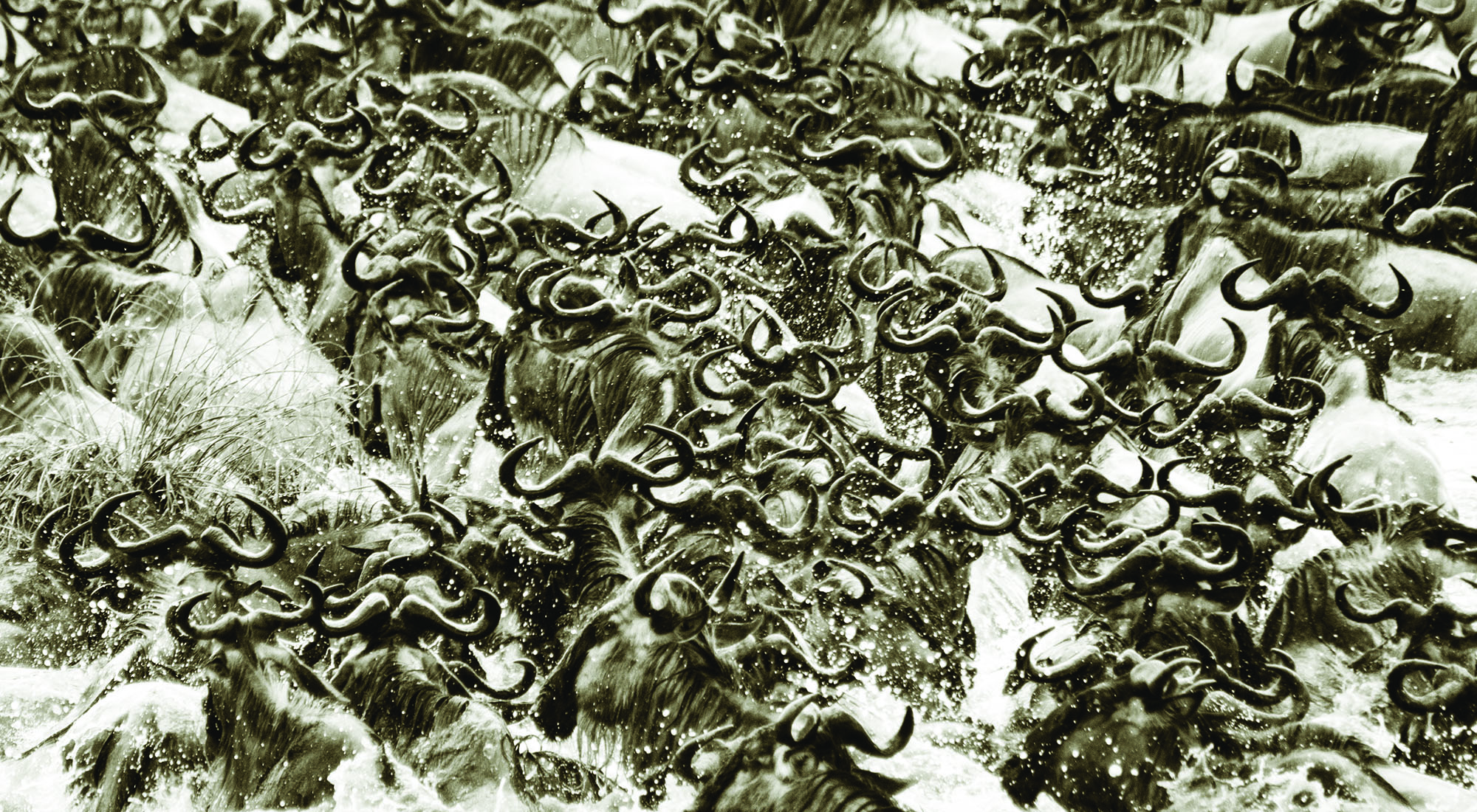 Photograph: Bryan Dietz
Above: The Crossing by Bryan Dietz, part of the African Safari Collection, chronicles hundreds of thousands of wildebeests making their way across the Mara River in the northern Serengeti in Tanzania.

Deb Dietz and her husband, Bryan, both grew up in Stamford, but it wasn’t until 1999 at a mutual friend’s birthday party in upstate New York that they actually met. Early on in their relationship, they began traveling together, and when they married in 2004 a honeymoon in Italy set them on their current path. “Experiencing different cultures and seeing the beauty of another part of the world really inspired us to make travel a regular part of our lives,” says Deb.

Bryan, who spent the early portion of his career as an advertising art director, later moved on to work in real estate with a Manhattan developer. But he continued to expand his skill as a photographer; along with Deb, his cameras were an integral part of the couple’s continuing adventures. The subjects always varied.

“It’s hard to choose our favorite destination,” Deb says when asked for the most memorable trip in what is now nearly two decades of travel. “Botswana and Patagonia are at the top of the list.”

Bryan’s keen eye for capturing the wild beauty they encountered along the way eventually became the genesis for a business. After Bryan gifted her one of his images for Mother’s Day in 2016, Deb decided it was time to go public with his creative work, and Million Miles Photography—today made up of the African Safari and Chilean collections—was born.

Interested buyers can find Million Miles online (millionmilesphotography.com) and scroll through a virtual catalog of some of Bryan Dietz’s landscapes and portraits of wildlife in their natural habitats. Recently the couple, who live with their two children in Shippan, has teamed up with The Collective (see sidebar), a Harbor Point venue for artists and dealers where Bryan’s work can be seen up close. It’s worth the trip, and there’s a bonus: Buyers of a Dietz photograph will simultaneously engage in a great cause.

“The most important aspect of the business for us is to give back to two areas in Africa that need help,” says Deb. The couple gives 10 percent of every purchase to the Anti-Poaching Foundation in South Africa, which protects rhinos and elephants in the Kruger National Park area, as well as to the Samburu Project, an organization that builds wells in Kenya to provide clean water and education about its use in that part of the continent.

Next on Bryan and Deb’s Million Miles itinerary is a trek among the ancient ruins and coastal vistas of Italy, and subsequent production of a new collection for the business. When asked about their company name, Deb notes that it began as a tribute to their late and much beloved basset hounds, Millie and Miles. Given the source of Bryan’s output and the distances the pair have covered, one can easily understand that the name has more than one meaning.