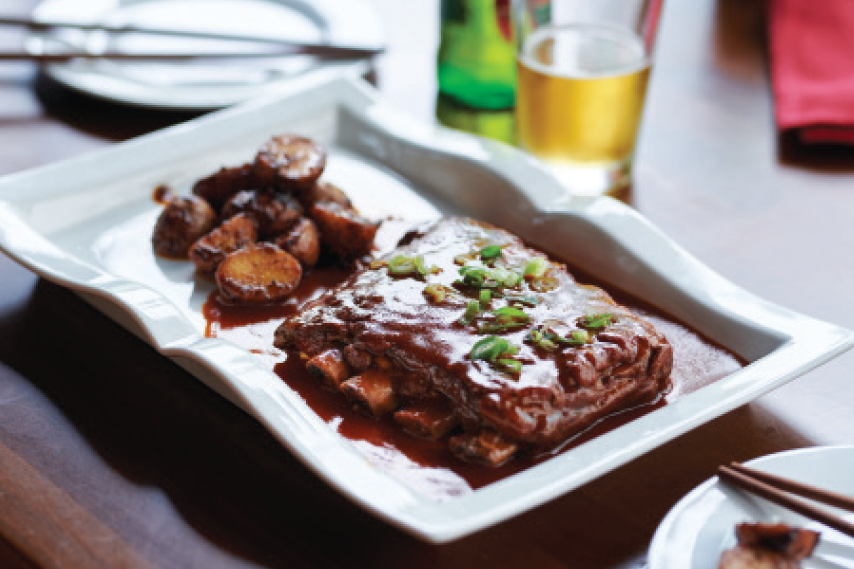 Above: Beggar’s Ribs, fall-off-the-bone meat in a brown sauce flecked with red chili peppers and spices, paired with potatoes

When we heard the veritable internet food star Peter Chang was setting up shop in Stamford, we took notice. We first heard of him after he left the kitchen of the Chinese Embassy in Washington, D.C., and moved from restaurant to restaurant in the Southeast, cooking food that blended tradition and novelty in a way that blew bloggers’ minds. Foodies took pilgrimages to his restaurants. Even Calvin Trillin of The New Yorker wrote about the elusive Chang. Today, Chang has settled down, operating eleven eponymous restaurants in Virginia and Maryland, including Q By Peter Chang in Bethesda. For his first restaurant in the Northeast, Chang chose Stamford.

On a recent visit to the large, comfortable, contemporary space soon after Peter Chang’s official opening, the restaurant was serving families, couples and groups of friends, many of them Asian. We observed servers delivering Peter Chang classics like scallion bubble bread, a big puffed ball of poori, which a family joyfully tore into, dipping pieces of it into cumin sauce. Another waiter carried an appetizer that might be mistaken for a pile of French fries dusted in Szechuan red peppercorns and showered with whole dried red chili peppers. Instead, the outside crispness gives way to the appealing soft texture and flavor of eggplant, spiked by heat.

The friendly servers and managers, eager to guide us through the menu, immediately asked about our heat tolerance—we like it. (For those who prefer milder preparations, there are non-spicy dishes on the menu like Furong chicken hot pot, velvet-textured chicken paired with tomatoes, mushrooms and snow peas.)

The bartender, too, said he’d make me any drink. (The bar menu wasn’t set yet.) He shook up a delicious spicy margarita, a fine drink to sip as we sat in a well-lit, comfortable upholstered booth, pouring over the colorful binder of a menu replete with helpful pictures.

Great news: Peter Chang’s makes the noodles, dumpling skins and pancakes in-house. Soup dumplings come in individual spoon/cups filled with clear liquid and a pork dumpling with pinched spiral sides crowned by a goji berry. “Drink the soup first,” said our server. The broth was an exquisite essence of chicken, and the dumpling was delicate, too, while the goji berry added a touch of tart. Undoubtedly, these are a must-order and are good for sharing. Some further intel: Shrimp and vegetable dumplings can be ordered steamed or fried, but the lightness of the wrappers makes the more healthful steamed ones irresistible.

The Thousand Layer Veggie Roll is a traditional dish, our server told us. We’re glad we listened: The fried rolls, with contrasting layers of crisp bean curd skin, smooth taro root purée and soft lotus root, were showered with fried red chili peppers, fresh scallion and cilantro. This dish proves that vegetarian can be exciting.

The entrée that stayed in my mind for days afterwards was the prawns with vermicelli noodles, a brightly flavored confetti of red pickled chili peppers and minced scallions over big, pink butterflied prawns, cooked just right. A base of clear bean thread noodles absorbed flavors of fresh ginger and the sea that were all enveloped in a touch of heat.

Peking duck is a star of Peter Chang’s menu, and it’s fun, too. Our server showed us how to assemble it by first peeling off the thinnest, lightest, almost see-through pancakes we’d ever seen from a stack in a steamer. She then placed julienned leeks and sliced cucumber on each pancake, added a slice of rich, tender roasted duck and a piece of crisp skin (from which the interior layer of fat had been removed). She drizzled two sauces over the filling: Rose petal sauce, a balanced floral with the sweet earthiness of pureed beets, and traditional hoisin sauce that added a sweet umami flavor. We rolled our pancakes and with each bite, took in a bundle of flavors and textures—fresh, cool, sharp, rich, meaty, crisp, sweet, earthy and umami—all bound by the lovely tender pancake.

Beggar’s Ribs are fit for a king. A meat-and-potato-loving king. Potatoes, you ask? Yes, as it is another example of how Chang incorporates other culinary customs into his cuisine. “Beggar’s” refers to a traditional chicken dish cooked in a clay pot. Here, ribs are coated in brown sauce flecked with red chili peppers and spices that blended into mysterious layers of flavor. The meat lifted easily from the bones. Potatoes were boldly dashed with black pepper. This is a hearty, winter dish.

The ultimate test of any restaurant is WICB (will I come back?). The answer is absolutely. There’s so much more to explore on Peter Chang’s menu. I’ve got a friend who is going back for the Shan City pigs’ feet. No kidding. I’m going back to try the whole fish (presented off the bone), and the fresh lily dan dan noodles. On a cold winter day, Peter Chang’s calls out for warming up over a big bowl of a traditional sour cabbage soup. Yet as much as I want to explore, I won’t resist ordering dumplings, prawns with vermicelli and the Peking duck again and again.

Homes With Hope on