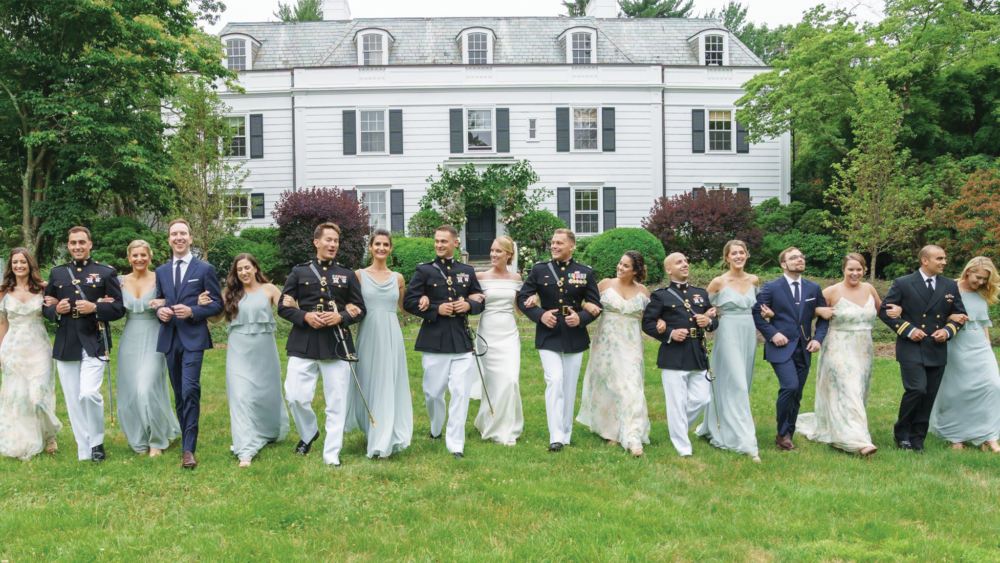 Sarah and Garrett met at Darien High School over a decade ago. Little did they know that the school library would be the beginning of a budding romance — although it would take a few years for them to rekindle the flame. When Garrett was stationed in Northern Virginia with the United States Marine Corps, he heard that his high school crush was living in nearby Washington, D.C. Hoping to reconnect with her, Garrett called Sarah (luckily her number hadn’t changed since high school) and asked her to a wine tasting at the Phillip Carter Winery in Virginia. After weeks of putting him off, Sarah finally agreed to meet Garrett.

On April 8, 2016, a limo arrived in front of Sarah’s New York City apartment and took her to an unknown location which ended up being the Tokeneke Club in Darien where Sarah had spent many summers with her family. When she arrived, Garrett proposed, and the newly engaged couple celebrated with Sarah’s parents before heading back to the city, where Garrett had a surprise engagement party waiting.

The couple was married by the bride’s uncle, Christopher Fitzgerald, at the Darien Community Association.

Sarah is the daughter of Jan and Peter Smith of Darien. She graduated from The George Washington University and is the head of marketing and social media at a restaurant group in Carmel, California.
Garrett is the son of Robert and Pamela Loeffelman of Darien. Garrett graduated from the Naval Academy and is currently a captain in the United States Marine Corps.

The couple honeymooned in Bermuda. They reside in Monterey, California where Garrett is currently getting his masters degree from the Naval Postgraduate School.