Westport is home to a veritable who’s who of successful professionals from national media stars, to best-selling authors, titans of industry, actors, singers and artists. You know them, you read about them, see them on television and might see them out from time to time dining at The Whelk, walking down Compo or even rocking out at the Levitt (in a better time). What you may not know is you’ve likely seen one of the most influential people in sports and business today and never had a clue. The co-owner of the NBA’s Milwaukee Bucks and billionaire founder of Avenue Capital Group, Marc Lasry, called Westport his weekend home for more than twenty years. The Beachside house known as “Casa Blanca” has been Lasry’s permanent home since COVID-19 began to wreak havoc in March. He and wife, Cathy, have had plenty of company over the last several months, their five kids and seven grandchildren have all stayed here for much of that time.

The sixty-year-old Lasry came to the United States with his family from Morocco when he was seven. He spent his childhood in West Hartford, graduating college from Clark University in Worcester, Massachusetts, and going on to earn his law degree from New York Law School. What lured Lasry here to Westport, however, was not the schools, beaches, arts nor access to the Metro North. “Originally, it was just the halfway point” between his parents in Hartford and the office in New York City, he said. What has kept Marc and Cathy here for all these years is well, “everything! Everything is nice about it. All we’ve ever had here has been a positive experience.” You might spot Marc at his favorite local eateries, which include Paci, Terrain Cafe, Garelick & Herbs, shopping “every other day” at Balducci’s or perhaps playing a little tennis at Rolling Hills Country Club in Wilton.

Lasry’s business is in New York, where Avenue Capital, a company he started with his sister in 1995, manages an eye-popping $10 billion. Like most of us, Marc has adapted to Zoom calls in his sprawling backyard where we recently sat down to chat about everything from Connecticut to basketball, the economy and politics. Enjoying the casual comforts of working from home, Lasry, wearing shorts, tennis shoes and a Bucks t-shirt, acknowledged the many months here quarantining has opened his eyes to the ease and comfort of life on the Gold Coast. “I’ve never been a New Yorker in my core. I love being in New York, but I’d rather be out here. It’s easier, less hectic, nicer.” Nice does not do justice to describe the stunning home the couple built here. The picturesque property is also well prepared for a visit from his NBA players, with a full-length outdoor basketball court and a tennis court not far from their private beach.

In fact, one of the NBA’s biggest stars, two-time defending NBA Most Valuable Player and this year’s Defensive Player of the Year, Bucks star Giannis Antetokounmpo has spent time at Lasry’s Westport home. The 6-foot-11 native of Greece  could, however, be on the move. Antetokounmpo is set to become a free agent after next season and his status following the Bucks 3-1 series ending loss to the Miami Heat has Lasry trying to answer one of the biggest questions in sports: Will Giannis stay in Milwaukee? “I don’t think he’s leaving Milwaukee, we’ve done everything we can to make Giannis feel comfortable that we’re doing the right thing.” The Bucks can also pay Giannis $80 million more than any other team for a total of $220 million according to estimates. Lasry does not think the enormous pay day will be the motivating factor. “I don’t think Giannis is driven by money. He’s driven by if he has a comfort level with people, and he has that with ownership, this team and the coach. I think the odds are very high he stays here.” Lasry also takes exception to the notion pushed forward by former NBA player and current ESPN analyst Richard Jefferson that Giannis is essentially former Bulls great Scottie Pippen and needs his [Michael] Jordan; a leading man. Said the Bucks owner, “Giannis is one of the most dominant players in the NBA, Jefferson can say what he wants but I disagree.” Lasry does acknowledge that the twenty-five-year-old MVP does need to expand his shooting range.

A pioneer in the distressed debt market, buying the Bucks has proven one of Marc’s best investments. He and fellow billionaire Wes Edens paid $550 million for the team in 2014 and Forbes estimates its worth $1.58 billion today.

However, the Bucks biggest accomplishment this season came in not playing basketball. The team’s decision to boycott Game 5 of their 1st Round Playoff series following the police shooting of Jacob Blake, led to a league-wide boycott and eventually spread to the WNBA, Major League Baseball and Major League Soccer. Lasry had no advance notice of his team’s plan but stood firmly behind them. “I knew the players were very focused on what happened in Kenosha. I was like, OK, I believe we were going to win the series anyway; they were willing to forfeit the game.” Social justice and police brutality had already been a central focus of the NBA playoffs in their Disney World bubble, but the boycott only shined the spotlight brighter.

Although the movement is a noble cause, it may prove to be bad business for Lasry’s league. Ratings are down 20 percent compared with the same period last season, and although the summer schedule and lack of fans present could present a problem, sports fans are quick to point out the league has become too political. Black Lives Matter is painted on the court and social justice messages have replaced names on a majority of players jerseys. Lasry is willing to take the good with the bad. “At the end of the day, you should always do the right thing. I don’t focus on if it’s bad business. I focus on, let’s do what’s right. Ultimately, we’ll be rewarded for doing what’s right,” he said.

Lasry is guided by a similar sentiment when discussing the divisive Presidential election. A major Democratic donor and close friend of both Bill and Hillary Clinton (both of whom have visited Lasry’s Westport home), the billionaire investor originally backed now Vice Presidential candidate Senator Kamala Harris in the primary. He’s now on board the Biden bus primarily because of that sense of what he feels is right and wrong. The owner of Casablanca says the race for the White House comes down to a simple question: “Do you want someone who is nice and decent, who is going to do the right thing, or do you want somebody who isn’t? That’s the pitch.”

Lasry believes a recovery of the battered U.S. economy could take several years. He believes people will return to restaurants as well as movies and that airlines will return to 90 percent of pre-COVID levels by next summer. He acknowledges the market is a poor indicator of the economy as a whole. “If somebody said to you a year ago, you’ll have a record stock market and half of Main Street, Westport, is boarded up, you’d say that’s impossible.”

That puts our town in the same position as many of the distressed debt assets that made Lasry both tremendously respected and fabulously wealthy. While COVID certainly devastated Westport in the short term, it could ultimately benefit, in that real estate values have sky-rocketed and the virus could permanently change commuting patterns. “What has fundamentally changed, six months ago if you said you’ll work remotely, I’d assume you weren’t working hard,” said Lasry. “Today that perception has changed. So people will return to New York, but probably not five days a week.”

From the macro to the micro aspects of the economy if your job is one of the 11 million that has not recovered, the Avenue CEO has this timely tip: “The biggest asset you have is relationships. You have to use those to find something. Don’t worry about asking for favors. The worst thing somebody can say is no—it never hurts to ask.”

And if you see your neighborhood billionaire around this fabulous town, it can’t hurt to say hello and, “Go Bucks!” 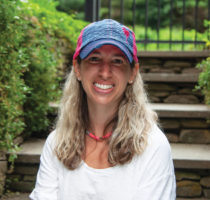