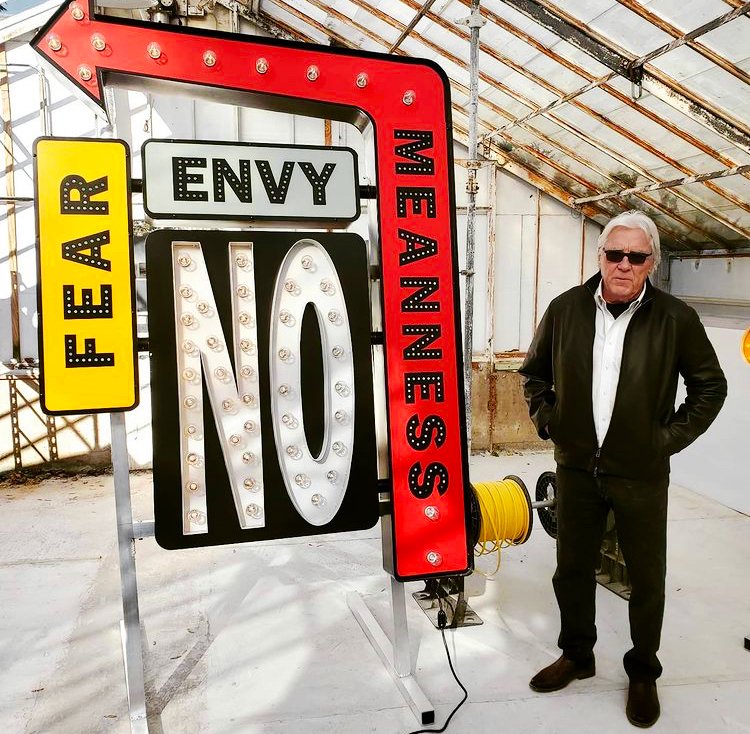 Heather Gaudio Fine Art PROJECTS is delighted to present Charlie Hewitt: Light Up! a solo exhibition featuring the artist’s recent illuminated sculptures. This is the second solo exhibition for Hewitt at the gallery and his first at the PROJECTS Space. The public is invited to an opening reception on August 27th, 3-5pm and the show will run through October 15th.

Hewitt’s artistic practice has spanned several decades and ranges from painting to drawing to prints and sculpture. Hailing from a large working-class family in Maine, where he currently works and resides, Hewitt’s boundless stamina also has him actively working in his second studio in Jersey City. His creative process combines the cultural vitality of mill-town communities in his native Maine with the inventive energy of the New York art scene. Hewitt’s work is filled with symbols and iconography sourced from these environments, expressionistic renderings that can be playful, edgy, and thought-provoking at the same time.

For this exhibition the artist will present wall-mounted sculpture that is illuminated by mini-bulbs or neon lights. On view is what has become the well-renowned and travelled Hopeful sign. This artwork has taken on new dimensions and meaning since it was first conceived in 2017 when Hewitt was commissioned to make a site-specific sculpture for the rooftop of the Speedwell building in Portland, Maine. The artist knew the work needed to be about light and offer a counterpoint to the cold, dark New England winters. At the time, he had begun working on sculptures with neon and enjoyed the color and romance the glowing lights evoked. He came up with the concept of a marquee-style sign that would work on a grand scale atop the not-for profit art center. After much rumination Hewitt landed on the word that for him resonated with the moment: Hopeful.

Created in a font befitting a retro automobile design, Hopeful speaks of an earlier time when the highway was the frontier and road signs offered exciting possibilities of adventure and a bright future. For the public, the nostalgic sign took on a different meaning when the pandemic closed the world a couple of years after the site-specific sculpture was installed in Portland.

Since then, the sign as a beacon has taken on a larger platform when Hewitt developed the Hopeful project. Creating two smaller-scaled versions in limited editions, the artist has installed them in various public spaces throughout the country. The art project has expanded to billboards, prints, and a short film made by an award-wining documentarian. In the movie, the sign is the protagonist, a gleaming statement placed in different venues and landscapes. The response to this sculpture has taken a life of its own, by far exceeding the artist’s wildest expectations.

Other electrified works in the exhibition can be interpreted as daily affirmations, such as Where You Need To Be and No Fear, while Queen of Hearts and Blue Hammer take on more personal meaning for Hewitt. The former is a portrait of his father, the card offering a poetic and romantic tribute, while the hand in hammer speaks to Hewitt as the worker and the working life that surrounds him.  For the artist, these illuminated sculptures are not intended to be passive. Whether situated in the public sphere or a private arena, their purpose is to activate a form of participation and elicit an emotional response. They can engage on a private level, as a thought or prayer, or can inspire a call for deeper activism in a community. Hewitt’s choice of a Pop visual language is deliberate in that it allows the sculptures to be relatable and recognizable, making them universal.

Hewitt’s work is represented in many important public and private collections including the Metropolitan Museum of Art, the Whitney Museum of American Art, the Brooklyn Museum, the Library of Congress in D.C., and the Portland Museum of Art in Maine, among others. The prolific artist is currently developing the Electric Garage in Jersey City and the Electric Greenhouse in Portland, two workshop studios intended to foster community interaction and creativity.

Heather Gaudio Fine Art PROJECTS, is a new venue designed to display artworks outside the scope of the gallery’s program. Through collaborations with artists, private dealers, and galleries in New York City and beyond, PROJECTS exhibits blue-chip, contemporary masters and site-specific installations. The aim is to diversify the art landscape and conversation, presenting collectors and the community with alternative engaging experiences and acquisition opportunities.  For more information and/or high-res images, please contact Rachael Palacios, rachael@heathergaudiofineart.com.