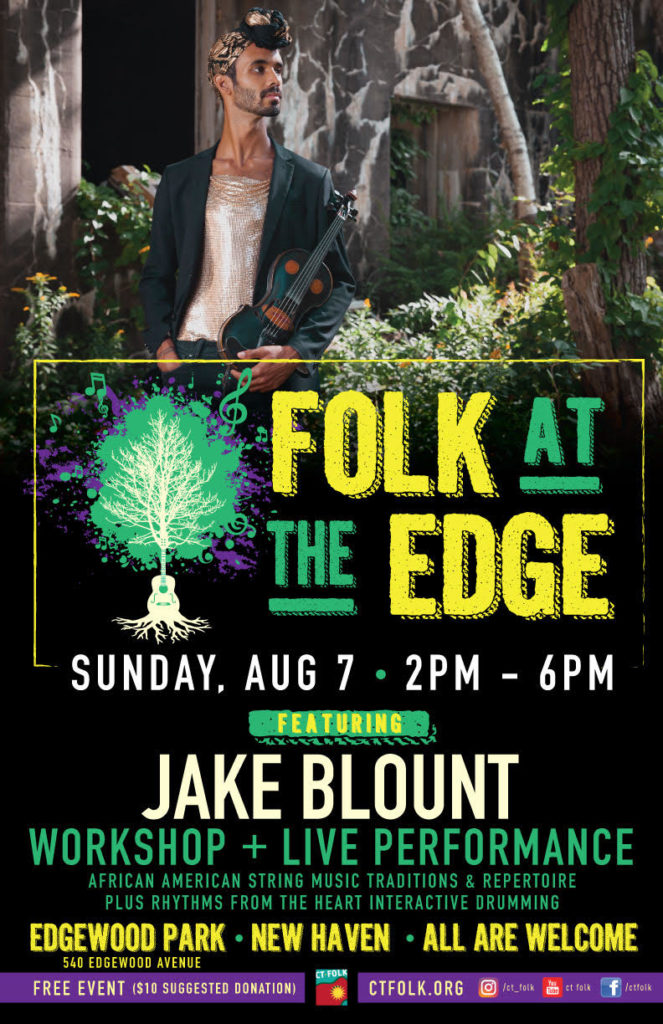 Folk At The Edge

Folk At The Edge is back again in 2022 for one show!  CT Folk is very excited to showcase Jake Blount for a concert and a workshop.

The afternoon will also feature Rhythms From The Heart interactive drumming and community yoga. You will also be able to shop local with Bamm Books, Little Feet Opus, Pure by Shasha and Megs Artisans.  Picnicking is welcomed.

Jake Blount (pronounced: blunt) is an award-winning musician and scholar based in Providence, RI. He is half of the internationally touring duo Tui, a 2020 recipient of the Steve Martin Banjo Prize, and a two-time winner of the Appalachian String Band Music Festival (better known as Clifftop). A specialist in the early folk music of Black Americans, Blount is a skilled performer of spirituals, blues and string band repertoire. Blount has performed at the Kennedy Center, the Newport Folk Festival, and numerous other venues across and beyond the United States. He has presented his scholarly work at museums and universities including the Smithsonian Institution, Berklee College of Music and Yale University. His writing has appeared in Paste Magazine, No Depression, and NPR. His latest album, The New Faith, is slated for release as part of Smithsonian Folkways Recordings' African American Legacy Series on September 23, 2022.