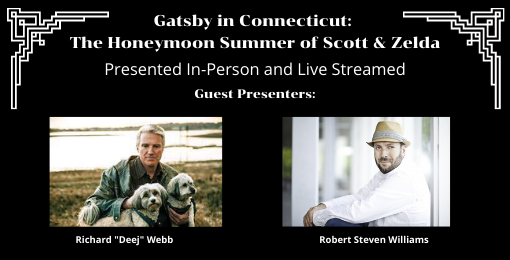 Gatsby in Connecticut: The Honeymoon Summer of Scott and Zelda

104 Weston Road and Via Zoom

From Free - but registration is required

The Great Gatsby has long been synonymous with Long Island, but what if Fitzgerald’s true inspiration came from here in Connecticut? Join the Weston History and Culture Center (formerly the Weston Historical Society) for the lecture, “Gatsby in Connecticut: The Honeymoon Summer of Scott and Zelda” with filmmakers Richard “Deej” Webb and Robert Steven Williams on Wednesday, September 15, 2021 at 7:00pm at 104 Weston Road Weston, CT. Free admission but registration required. Register at https://www.eventbrite.com/e/gatsby-in-connecticut-the-honeymoon-summer-of-scott-and-zelda-tickets-167513977817

The lecture will take place in person and will also be live streamed on Zoom. Limited seating in person! When you register, please select if you will attend in person or via Zoom. Please consider supporting the Weston Historical Society, a 501(c)(3) non-profit organization, with a suggested donation of $5. Donate at: www.westonhistoricalsociety.org.

During the lecture, “Gatsby in Connecticut: The Honeymoon Summer of Scott and Zelda”, Richard “Deej” Webb and Robert Steven Williams will discuss their recent documentary, “Gatsby in Connecticut: The Untold Story.” Their film tells the real story behind the famous novel and its tragic hero, debunking the long-held belief that the book was solely inspired by the Fitzgeralds’ time in Great Neck, across the Sound in Long Island, and lays out enough information about the fascinating Mr. Lewis that it is difficult not to believe that he is the true inspiration for one of the most captivating and iconic characters in American literature, the great Gatsby himself.

Scholars have dismissed the influence of the Fitzgeralds’ idyllic period in Connecticut, but Westport holds answers to questions that can’t be answered by only studying Long Island. This fascinating realization was at the heart of the documentary written by Richard “Deej” Webb and Robert Steven Williams in their film that combines real detective work with a paean to the Jazz Age. Webb also recounts the work it took to create the film in the companion book “Boats Against the Current: The Honeymoon Summer of Scott and Zelda.”

This lecture is in connection with the history center’s 1920s exhibit, “Weston Slept While the Nation Roared: Life in the Twenties” which is open to the public every Wednesday, Thursday and Sunday from 1pm – 4pm at 104 Weston Road in Weston, CT.

RICHARD “DEEJ” WEBB is an author, an award winning educator, and a documentary filmmaker. A graduate of Vanderbilt University, he has taught history for twenty four years at both the high school and college levels. A featured presenter in the Connecticut Public Broadcasting Prohibition documentary “Connecticut Goes Dry”, he is author of “Boats Against the Current: The Honeymoon Summer of Scott and Zelda.” Webb is also co-creator and co-producer with Robert Williams of a documentary film about the Fitzgeralds in Connecticut, which is a companion to this book. Foreword by Robert Steven Williams, a Harvard Business School Graduate, music industry consultant and film-maker who lives in Westport, Connecticut. Williams and Webb have collaborated on a film about Fitzgerald in Westport and that the New Yorker ranked #30 of the top 36 films of 2020.

ROBERT STEVEN WILLIAMS is an executive producer, director, author editor and filmmaker. His production company, Against the Grain Productions, produces short videos primarily for not-for-profits including the Paul Newman charity Safe Water Network and Land is Life, an organization that safeguards the rights of indigenous people around the world. Williams’ debut novel, “My Year as a Clown”, released on the indie imprint Against the Grain Press and distributed by INscribe Digital, received the silver medal for popular fiction from the Independent Publisher Book Awards in 2013. It has sold more than 5,000 digital copies and reached number one on three Amazon charts.