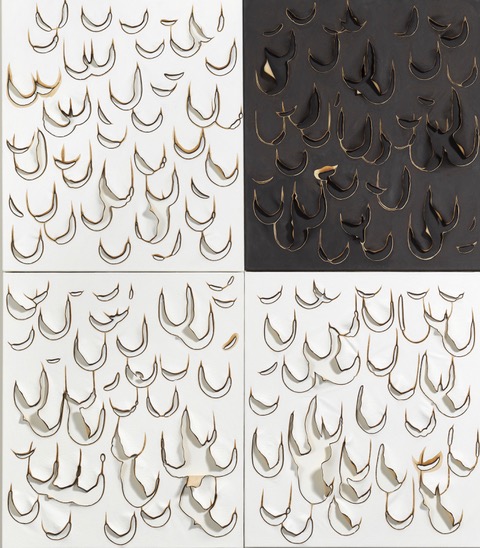 Heather Gaudio Fine Art is pleased to announce “Kathleen Kucka: Slow Burn,” her first solo exhibition at the gallery.  Opening on March 14th, the show has been extended through June 20th.

The exhibition will showcase new eye-catching paintings and prints Kucka has spent the past year creating.  Her multi-step process is an activation of the picture plane employing unconventional, if but contradictory methods.  Using different tools, such as coal fire starters, torches, irons, or hot plates, Kucka carefully burns the surface of the canvas, negating pictorial conventions and the medium of the paint itself.  Some markings form calculated straight, concentric or radial patterns, while others take on more random, fluid arrangements.  She paints or leaves the canvas bare, intentionally leaving traces of the scored and smoked areas as evidence of the physical engagement with the material.    At times, the pigment humorously emulates animated flames across the surface. These perforated canvases are then mounted onto secondary prepared paintings which may introduce another color to the overall composition.  In this way, Kucka addresses the limitations of the canvas by accentuating the voids, which become the spaces beyond the picture plane.  For Kucka, the act of piercing a work with heat or fire is another way to create her mark – from destruction, new articulations emerge.  These intriguing works are reminiscent of ancient forms or patterns seen in nature.

The show will also feature new large monochromatic woodcuts that also draw attention to the material and surface.  The grain on the woodblock is interrupted by scorched markings before being inked, and Kucka then adds her repeated rhythmic burnt language onto the paper; in essence making each impression unique.  While Kucka lives and works in New York, fire codes relegate the burning to her studio in Connecticut, where she spends part of the time.

Kucka has been the subject of numerous solo and group exhibitions including a recent 20-year survey at Indiana University. Her work is in several collections including MoMA; The Norton Museum of Art, West Palm Beach; The Birmingham Museum of Art; the Weatherspoon Art Museum in North Carolina; and the Borusan Contemporary in Istanbul.