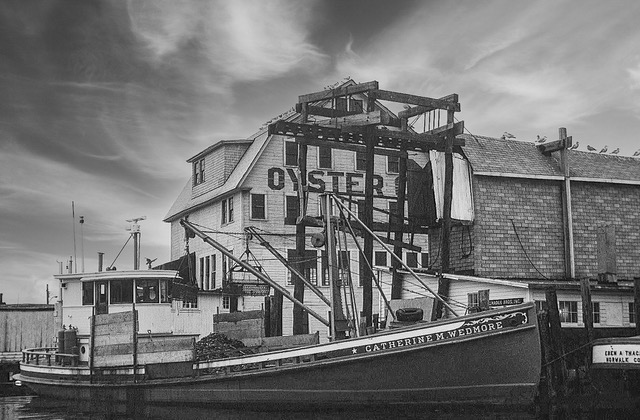 From Free - but registration is required

Calling all oyster lovers! The Norwalk Historical Society is hosting a virtual chat with photographer, Bill Whitbeck about his new book, “Oystering in Norwalk, Connecticut”.

This illustrated talk will highlight photographs from Mr. Whitbeck’s book as well as rarely-seen images from his personal collection. Join us as we explore a brief history of oystering in and around Norwalk and learn of Mr. Whitbeck’s reminiscences about growing up in East Norwalk and his love of oystering, his relationship with the Bloom family, and stories about his old photography business that was housed in the Radel oyster building. Learn how his waterfront studio allowed him to photograph every aspect of oyster and clam harvesting in the waters surrounding the Norwalk Islands. Q & A will follow the lecture.

About Bill Whitbeck: ‘Oyster Bill’ Whitbeck is a Seattle based photographer and writer. Originally from Norwalk, Connecticut, he became interested in shellfish farming while operating a photography studio in an old oyster house on Long Island Sound. It was during the 1970s and early 1980s that he photographed every aspect of oystering in Connecticut. After moving to the Seattle area in 1977, he found himself becoming more and more involved with the Northwest shellfish scene, and co-authored “The Joy Of Oysters- A cookbook and guidebook for shucking, slurping, and savoring nature’s most perfect food”, which was published in 2001. In October 2017, Bill retired from Taylor Shellfish Farms as their Seattle area sales manager, where he coordinated the sales and deliveries of fresh shellfish to roughly 200 restaurants. His direct contact with Seattle area’s best chefs and restaurateurs made for a very enjoyable job! In addition to his involvement with Seattle’s bustling food community, Bill continues living life to the fullest as a photographer, writer, and musician, having performed at New York’s Carnegie Hall in 2006. He is also a seasoned mariner, holding a US Coast Guard 100-ton Captain’s License. Bill received a BS in Photo-Illustration and Journalism from Kent State University in Ohio.