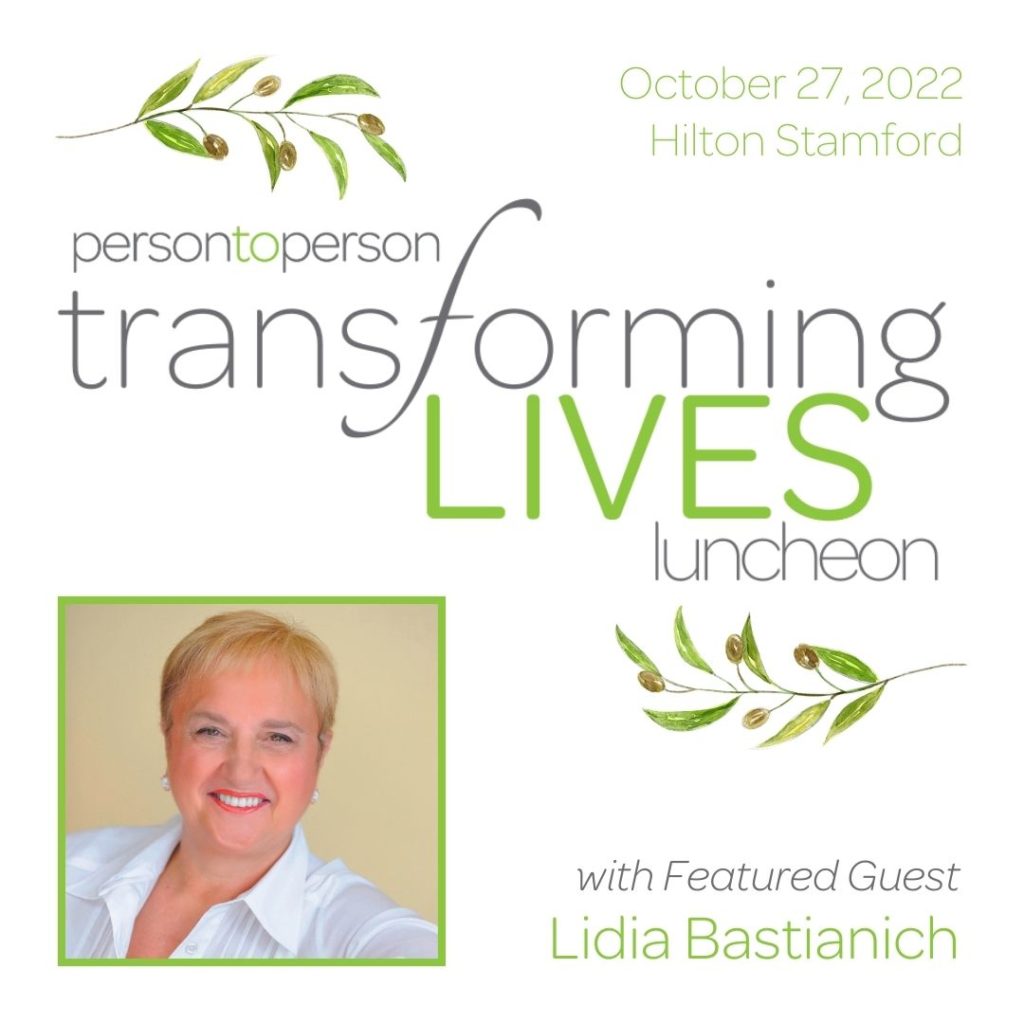 Join Person to Person and Lidia Bastianich for P2P's Transforming Lives Luncheon on October 27, 2022 at the Hilton Stamford.

Lidia Bastianich is an Emmy award-winning public television host, a best-selling cookbook author, restaurateur, and owner of a flourishing food and entertainment business. Among the numerous awards and accolades, Lidia has earned are seven James Beard Awards (Outstanding Chef, Television Food Show, Best Chefs in America, Who’s Who of Food & Beverage in America, Specials 2016, Special 2017, and 2018) and two Emmy Awards for Outstanding Culinary Host (2013 and 2018). Lidia has published numerous cookbooks, co-authored with her daughter Tanya, and companion books to her Emmy-winning television series Lidia’s Kitchen, Lidia’s Italy in America, and Lidia’s Italy. Autographed copies of her most recent cookbook is “Lidia’s A Pot, A Pan, and a Bowl” will be available to event attendees.

“I am honored to be part of this year’s P2P Transforming Lives Luncheon,” shared Lidia. “The incredible work Person to Person does to provide people with essential services like food and financial assistance is life-changing. As someone who was forced to leave their home at nine years old, and create a new life, I can relate to many of the families P2P helps.”

Guests will be treated to one of Lidia’s recipes during lunch while enjoying a conversation with Lidia and Debra Ponzek, internationally acclaimed chef and owner of Aux Delices.

Co-chairs for the event are Christina Johnson-Wolff and Michelle Lappas. Committee members include Kim Brown, Andrew Brown, Cathy de Graaff, Allison Gagliardi, BJ Gedney, Angela Riley, and Eileen Sussan. If you would like to be part of the event committee, please email Sara DeRose at saraderose@p2pHelps.org.

Sponsorships are available at p2pHelps.org/TLL. Top-level sponsorships include a special VIP Meet & Greet with Lidia. Moffly Media is the official media sponsor.