Most new parents will tell you—a new baby is all encompassing. So you’ve got to hand it to designer Jennifer Smokler, who took on her first solo design project just after having a baby, and turned an empty plot into a colorful second home for a Manhattan family.

Smokler had just gone on maternity leave from her job at Bunny Williams when the homeowners asked her to take on their project, and for her, it was perfect timing. “It was great to be involved from the very, very beginning,” says Smokler, who went to see the property with the couple before they even purchased the land. Weeks after her son was born, she got down to business. “It was the only project I worked on for almost a year,” she says. But together she and her clients made quick work of the property, breaking ground right around Thanksgiving of 2010, and getting them moved in before the Fourth of July the following year. There was no separate architect for the job, so Smokler was very involved in the architectural selections, and was there every week for site meetings to make sure things were going smoothly.

The home couldn’t be too large, in order to comply with zoning regulations, but there was a lot to fit in, so Smokler and her clients spent a good amount of time working the layout to incorporate all the features they wanted. Their requests for a second-floor sitting room from which to enjoy the water view, and enough bedrooms to accommodate frequent guests, were both realized, as well as a bright and bold color palette befitting a summer place.

One can envision a party lounging in any of the large open rooms with mojitos in hand, enjoying the water view and sunlight streaming in through the windows. “It’s really a place that you want to be in summer,” says Smokler.

The designer’s time at Bunny Williams, plus a seven-year run at David Easton, gave her a vast knowledge of antique furniture, but the homeowner opened her eyes to 20th-century decorative art and design. “We learned a lot from each other,” says Smokler, whose client researched many of the home’s pieces. The couple trusted their designer’s vision, and encouraged her to go outside the box and break the rules.

“They pushed me to push them,” says Smokler. “They had a lot of faith in me.”

Smokler delivered on their request for color with a pink-and-orange living room, a silver-and-teal mural in the dining room, and patterned pillows in nearly every room. In the kitchen, oversized yellow pendant lights, found by the client at an auction in Belgium, hang over a zinc-topped wooden table surrounded by chartreuse dining chairs.

“I think you can make more of a commitment to color when you’re not living with it every day,” says Smokler. With that in mind, she also used funky papers in two of the bedrooms, which make a short stay a little more special.

The living room was the last to come together, but the juicy color combo was one of those bright ideas that hits you in the middle of the night. “I had a newborn so I was up a lot in the evenings, and I remember imagining the room in all the colors of the rainbow, and then just hit on this,” says Smokler.

The red table is an unexpected addition to the mix, the deeper hue grounding the space. Nothing, however, can upstage the Yves Klein coffee table, made with 3,000 sheets of gold leaf that were installed into the base on-site. “It’s like a work of art,” says Smokler.

Upstairs, the limed oak library more than fulfills the second-floor sitting room requirement. From here, the family can take in the water view, use the game table, or pluck a book from the shelf and wind down with a drink from the bar.

The clients didn’t want the house to look brand new, so on the exterior, Smokler skipped the white windows and opted for dark metal, and complemented them with green trim, an atypical choice for this traditional shingle-style.

Even if you’ve been doing something for years, going out on your own—like having a first (or second) child—is something you’re never completely prepared for, but Smokler was up for both challenges at once. This project marked the birth of her solo career, and although “there was definitely a learning curve,” says the designer, if she follows her instincts as she did with this home, her business—and clientele—will grow nicely. 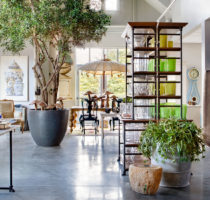 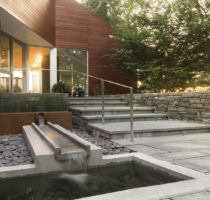 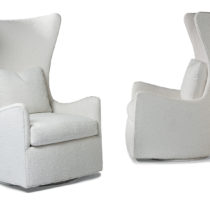 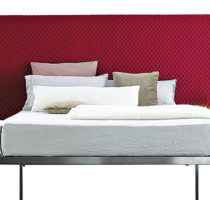 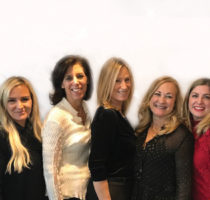 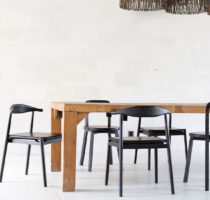 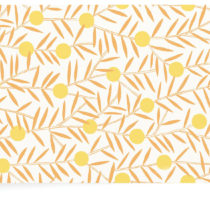 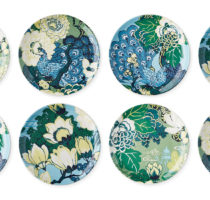