Tell me a little bit about your house. We bought the house in 2015, and it turned 200 years old in 2016. It sits on a three-acre piece of property, and it was originally part of a much larger farm. It was owned by one of the Weeds, an important local family. We are technically the fifth owners, and the previous owner had a lot of historic information about the house in a few boxes in the attic. Looking at some of the old photos, you can see it was much more of a farmhouse and had more meager beginnings. An addition in the back that includes the kitchen and breakfast room is about 125 years old. A widow named Mrs. Clement Guion bought the house in the 1920s, and she hired a well-known architect, Alfred Mausolff, who had designed the New Canaan post office (now Citibank), to renovate it into more of a classic center-hall Colonial. She also had blueprints drawn up for the landscape design, but it’s unclear what was actually implemented. We still have those plans, which is fabulous. There are four structures on the property—the main house, the main house’s garage/barn that was rebuilt in the 1980s, an original 1920s garage that I converted into my office, and a garage for that building as well. What really got us when we saw the house was the property—it’s so beautiful, and there’s a gorgeous view from the screened porch. That, to me, was it—we could see it.

After buying the house, what came next? My husband, two boys and I first lived in the house as is while we renovated the original 1920s garage. This garage had an apartment above it, so we gutted and renovated that into a full cottage so we could move into it while we renovated the main house. I designed the cottage to be my office, also knowing we had to live in it for a year, so it has a working kitchen and bathrooms.

What were some of the updates to the main house? It was a full gut. I did all of the architectural interiors, and we got an engineer to sign off on the roof. We raised the roof 18 inches and added dormers in the front. We brought a crane in to make the large, central fireplace a working fireplace again, because, with original antique homes, the big central fireplace is integral to the structure of the house. We replaced all of the windows in the exact design of the original ones. While the screened porch floor is original, we replaced the rest of the floors throughout, because they were mismatched over time. We upgraded the insulation, plumbing, electric—it’s basically a new house, but with 7-foot-3 ceilings! We also won a historic preservation award for this home.

Were you able to maintain anything from the original home? We kept the footprint of the original home the same, but we did some reworking to the newer, late-1800s-structure that included the kitchen/mudroom layout and the master bedroom and bath. We rejiggered the addition of the kitchen footprint a bit to fit in pantries. flipflopped the layout of the master suite, and took out the rear stair and relocated the first-floor powder room there. I kept the Dutch doors and original side lights, but I did the new ones in the same design so that they were weatherproof, soundproof and more energy-efficient. The house was at the point where it needed a full renovation, and I wanted to bring it back to its truer state. We did things in the same style as what was here before, but we upgraded everything.

Sounds like quite a project! This is the fourth renovation project since we’ve been married, and they’ve always been antique homes. The last house we had was in town, and we won our first historic preservation award for that, and it was also our first gut renovation. So, even though we had done renovations before, we had never done one on three acres with a lot of outbuildings. It was a big project and very time-consuming, but the house works really well for us. When we raised the roof in the attic, that became our older son’s “lair,” with his bedroom and sitting room. The second floor has two bedrooms in the front, one of which is my younger son’s room with a sunroom (his “lounge”), and a guest room. Our master bedroom is in the back, along with the laundry room, master bath and closets. On the first floor, the main entrance was changed to the side entrance in the 1920s, and the new foyer is off of the side entry. We removed a corrupt chimney in the breakfast room, and that’s where my bar is now. In the 1950s, a family room flat roof addition was also put on, and in there, we ripped out wall-to-wall carpeting that had linoleum underneath it as well as paneling I like to call “Sears paneling.”

What overall vibe were you looking to create? I started with the exterior. To me, the way to tie all of the structures together was to unify them with paint. I didn’t want this to be another white house; a more modern, fresh take on it was to do a monochromatic look. I used Benjamin Moore’s Ozark Shadows on the exterior, and that dictated from the outside in, with all of the interior doors painted Benjamin Moore’s high-gloss Baltic Gray, which is very close to Ozark Shadows. Much of this house was taken from my old one; there are a lot of similarities. In my old house, I had open shelves above the bar, and I love displaying my collection of cake plates, so I just modernized it here. Instead of having one shelf with brackets, I did two-inch floating shelves. You don’t get to do a lot of chandeliers when you have 7-foot-3 ceilings, but where I could, I did, and I put in a lot of vintage lighting. And oddly enough, all of our furniture fit beautifully. Our farm table fit perfectly in the dining room; the desk and wing chair that we had fit perfectly in the library. It was an easy evolution.

How did you handle the living and dining rooms? That was one of my hardest challenges. I knew where the dining room had to go, so we ripped out the radiators and gained some storage there. The living room was more difficult—I originally tried putting the sofa against the front windows, but it just didn’t work. I did replace the sofa and the coffee table and got a new rug, and we redid the fireplace. I call that sofa the “teen sofa,” because my boys tend to lie on that couch more. My husband and I love entertaining, and what’s great about the sideboard in the dining room is that you can load it up with food, and everyone can fill their plates and enjoy the view. The hutches in there hold all of my grandmother’s china—she was an etiquette and home economics teacher in Baton Rouge—and I have every serving piece you could possibly have.

What were some of the updates to the kitchen? We had a tiny kitchen in our old house, so this was like, “Ooh, yay!” [laughs] I love designing kitchens; it’s one of my favorite things to do. It’s not just aesthetic—it’s about where the utensils go, where Tupperware is stored; when you make the kids’ lunches, do you have to walk across the room twelve times? You have to think about how it works. We opened up the old kitchen and added a big bank of windows that overlooks the yard. I’m a baker, so that’s how I thought about this island, which is where I would lay out dozens of my Christmas cookies. Nothing punctuates low ceilings more than short little upper cabinets, so to trick the eye, I used open, floating shelves and tall cabinets that sat on top of the counter, elongating the look of the upper cabinets. I also brought in a blue/gray palette as a counterpoint to the warm gray of the doors throughout the house. But the best part of the kitchen is the bar—we always have a bar set, just like my Southern grandmother did; the only thing she had to do was fill the ice bucket. We’ve actually been playing board games at the breakfast table, which means we’ve been eating dinner in the dining room so we don’t disturb our game! Since Covid-19, we’ve been outside on the screened porch a lot, since it’s accessible from the breakfast room and dining room, so that’s been great. We just throw open the doors, play music and hang out.

Tell me about your master suite. The original bedroom was in the front, and the closets and bathroom were in the back. Because we had such low ceilings, I wanted to vault the ceiling to give volume and lightness to the space, so I shifted the bedroom to the rear. You now walk through a hallway with the bathroom on the left and the closets on the right, and I carved out a proper laundry room that you access from the hall. I chose Benjamin Moore’s Kitten Whiskers (but cut) for the room, and it’s a soft taupe-y pink. I did a higher headboard to elevate the eye even more; the secretary came from our old house; and I put in some new art.

How does this home compare to your previous homes? It’s different than homes I’ve designed but similar to homes I’ve lived in. It’s substantially larger in size, but it’s the right size. It’s taken the best of everything we’ve done and put it in one place; it was a natural fit. We’ve always believed that what you get from keeping an old house and its charm is something you can’t replace. To me, it’s how to do an old house, to maintain what you can and be as authentic as you can, while being energy-efficient and smart.

What’s in the future for your home? One of my favorite movies is Under the Tuscan Sun, and one of the characters has a line about how she saw weddings in her house, children in her house. And that’s true for me—when I look out at our yard, I see weddings. I have two boys, so one of them better get married here! [laughs] I have the next twenty years to evolve the landscape and bring it back to Mrs. Guion’s plans, and put in a pool! That’s my plan, and I want to stay true to that. This is it for us. 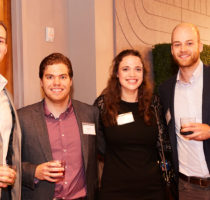